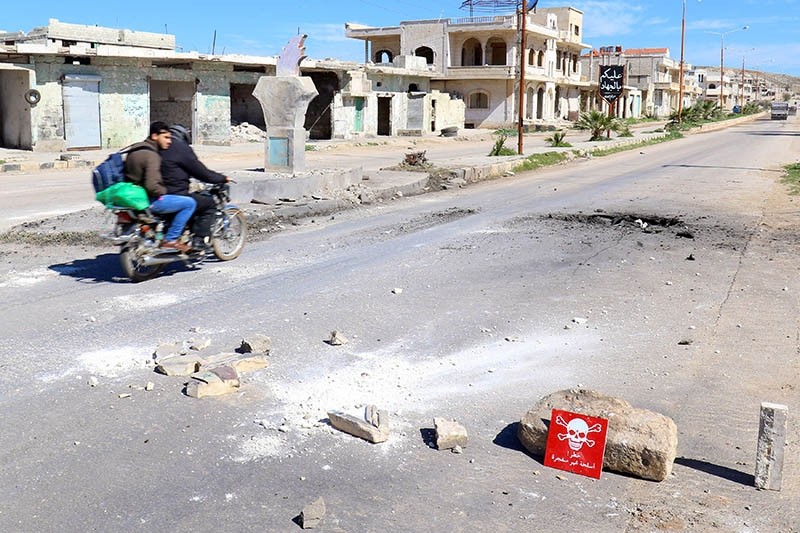 Men ride a motorbike past a hazard sign at a site hit by an airstrike on Tuesday in the town of Khan Sheikhoun in opposition-held Idlib (Reuters Photo)
by Anadolu Agency Apr 08, 2017 12:00 am

Foreign Minister Mevlüt Çavuşoğlu said Saturday that in the absence of strong follow-up efforts, the U.S. missile strike on Assad regime base could amount to nothing but a "cosmetic" move that accomplishes little.

In a speech in the Mediterranean city of Antalya, Çavuşoğlu said, "The ideal solution is a political solution."

"If this stays with just one airbase, if this regime can't be removed from Syria, it will stay a merely cosmetic intervention," Çavuşoğlu said. "The ideal solution is a political solution, and we need to implement a transitional government in Syria as soon as possible."

"Hopefully stability and peace will come back to Syria, and Turkey will play a major role in that," Turkey's top diplomat said. "The world, in these recent events, began to understand what we meant by calling for safe zones."

Çavuşoğlu's remarks came after the U.S. early Friday fired as many as 60 Tomahawk missiles at an Assad military airbase American officials believe was used to carry out a deadly suspected chemical attack.

Some 100 civilians were killed and 500 others -- mostly children -- were injured in the attack allegedly carried out by Assad regime warplanes in the town of Khan Shaykhun, Idlib province.

The Pentagon said initial indications are that the strike "severely damaged or destroyed Syrian aircraft and support infrastructure and equipment at" the Shayrat Airfield.