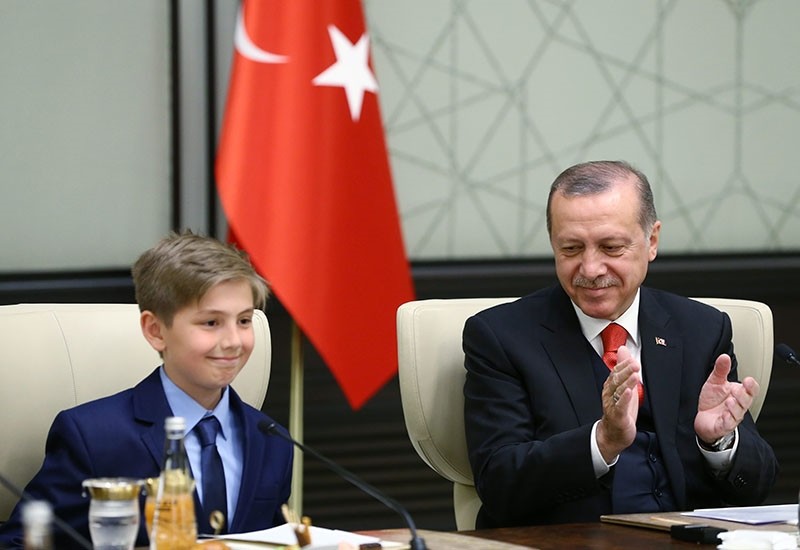 When the 10-year-old President was asked whether he considers being the chair of the Justice and Development (AK) Party, he responded 'Why not?'

"Just as he says, if he has the permission to do so, why wouldn't he," President Erdoğan added to Yiğit Türk response with a smile.

Speaking before giving his seat, Erdoğan noted the importance of Turkey being the only country in the world that celebrated a national day for children.

"I hope for success in your classes. As I always say, kiss the hands of only three people: Your father, mother and your teacher. No one else. We saw a lot of people extending their hands in this country. No longer."

When asked if he foresaw a cabinet reshuffle, Türk said: "That's not a discussion for today."

Türk also said that the age for becoming a parliamentarian has now been dropped to 18. "I'm 10 years old. I would like to become a part of the government and serve my country as soon as possible. I believe the minimum age for becoming a deputy can be decreased even further. We all know Mehmet the Conqueror, he became a sultan and conquered Istanbul."

Ottoman Sultan Mehmet the Conqueror was 12 when he first assumed the throne for a short while before becoming a sultan at the age of 19. He conquered Istanbul, then Constantinople, two years later.

Turkey has celebrated National Sovereignty and Children's Day every year on April 23 since the foundation of the Republic.

The celebrations last for one week and are marked with ceremonies and performances recognizing children as the nation's future.