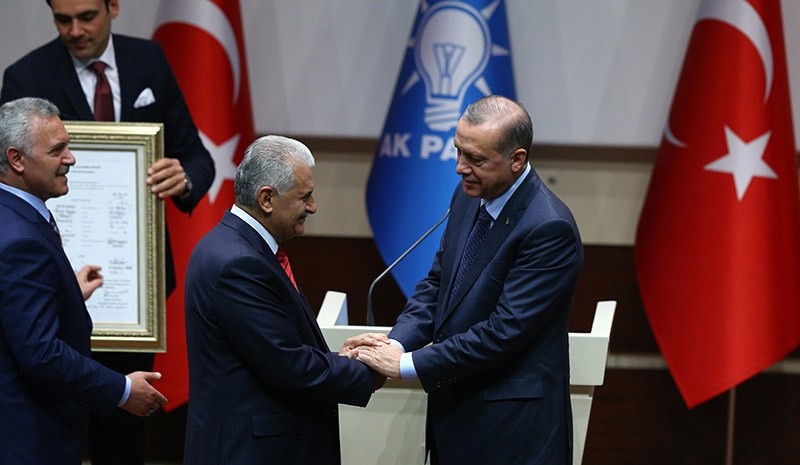 Following the April 16 referendum which amended the Turkish Constitution and allows the president to be a member of a political party, President Recep Tayyip Erdoğan arrived at the Justice and Development Party (AK Party) headquarters in Ankara Tuesday to officially rejoin.

President Erdoğan signed a membership form, confirming his re-admittance to the party after 979 days of separation due to legal obligations. Addressing a large crowd of attendees Tuesday at the AK Party headquarters, he described the political party as his "love, passion, and home," adding that "in the coming period, we will together continue our glorious walk with more strength and determination." Ahead of Erdoğan's speech, Prime Minister Binali Yıldırım addressed attendees, saying the party will offer the position of chairman to Erdoğan prior to the extraordinary congress that is to be held on May 21.

Underlining that the "979 days of yearning" to join the AK Party have come to an end, the president said, "Separation from the party was only an official technicality. The distance between us was due to legislation. However, our hearts were always together." Affirming that the ruling AK Party government will continue its efforts in the coming period, he also stressed that everyone who is not affiliated with terror, treason or despair always has a place in the party. Urging party members to maintain their sincerity and drive, Erdoğan noted that the burden on the party from now on is much heavier. The president continued his remarks by touching on the establishments that the AK Party has made, saying, "We have gained the concept of 'AK Party-style politics' in Turkey's social sciences literature. This is the reality, whether they believe it or not. Is there such style seen in politics anymore? Has 'AK Party politics' entered the literature? Yes. Hopefully, in the years to come, this matter will be talked about, discussed in depth and will be placed in a conceptual framework to enlighten future generations."

Reminding attendees that the worsening situation in Syria and Iraq exposes Turkey to major terror threats, especially along its borders and at the municipal level, Erdoğan stated that the government has come to the final phase in a comprehensive operation to completely eliminate terror along the border with Syria. He also drew attention to the failed, bloody July 15 coup attempt conducted by the Gülenist Terror Group (FETÖ), touching on European criticism of counterterror operations targeting FETÖ affiliates and members of the cult.

"One must realize that there is no other organization more successful at organized deceit than FETÖ. They are very good at hiding themselves; thus, we cannot look around to see who says what [regarding the operations against FETÖ]. There is the judiciary, our judicial system and Turkey's judiciary works. Necessary steps will be taken. ...I sincerely believe this; if we have mercy then we will [later] beg for mercy," he added.

Erdoğan also raised questions regarding FETÖ-affiliated charter schools in the U.S. that are still operating and providing monetary funding to the terror group, saying: "We must find an answer to this question first. Likewise in Europe, we are looking at the developments in Germany. They are providing all means of support for them [FETÖ] as well as the PKK. Why are they providing this support? To block the pathway of strengthening Turkey," he said.

The welcoming ceremony began with the president signing his membership declaration and was followed by the singing of Turkey's national anthem. Hours before both Erdoğan and Yıldırım's arrival to party headquarters, dozens of people gathered outside the building with hopes of seeing the president. Ministers and AK Party deputies also shared their excitement with members of the media upon their arrival. Speaking to Daily Sabah, AK Party deputy Talip Küçükcan emphasized that the party will experience a "revitalization process" with Erdoğan's return.

"It is certainly natural and anticipated to experience a change in the AK Party with President Erdoğan's return. These changes are likely to include things such as changes to the Cabinet, the Central Decision Board and the Central Executive Board. This procedure is evident in all democracies, as we have witnessed many political parties throughout the world experience an adjustment period within two years of governance," Küçükcan added. He further noted that Erdoğan's return to the party "will mark a new horizon in Turkish politics."

On Erdoğan's arrival, deputy parliamentary speaker and AK Party deputy Ahmet Aydın told Daily Sabah that the president's return will "further enhance" the AK Party, saying: "The AK Party is strengthening, and continuing its walk in determination, which means that Turkey is becoming stronger. Turkey's destiny is in line with that of the AK Party."