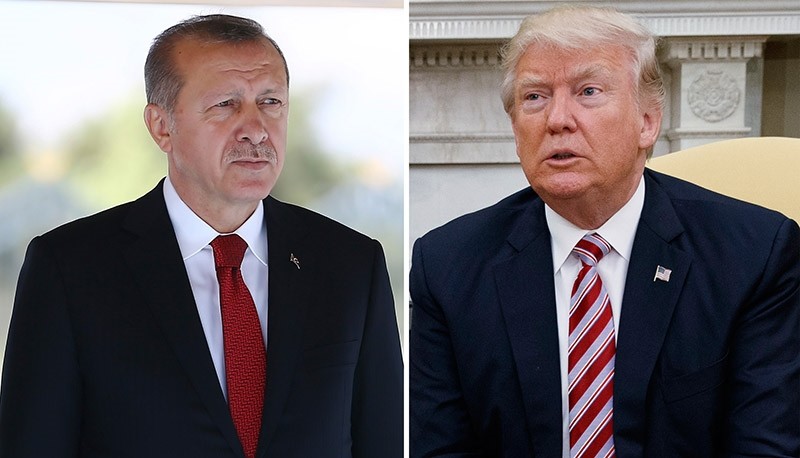 Trump's decision to directly arm the YPG on Monday came in the middle of a high level Turkish delegation's visit to Washington whose aim was to lay the groundwork for Erdoğan's trip, and discuss alternative military plans for the already ongoing military operation to liberate Raqqa.

U.S. National Security Adviser Gen. H.R. McMaster and others told Turkish officials, among them the top commander of the Turkish military Gen. Hulusi Akar, Intel Chief Hakan Fidan and Chief Presidential Adviser Ibrahim Kalın that the administration had already taken the decision to arm the YPG.

"The Americans have been trying to convince us that there was no quicker option to take Raqqa but the truth is that they themselves have been divided all along," said one Turkish official familiar with the issue.

The Turkish delegation repeatedly told senior U.S. officials that such a decision would undermine President Erdoğan's first in-person meeting with President Trump, and both sides willingness to open a blank page following the Obama administration's disastrous relations with Ankara.

"We came to the conclusion that Erdoğan's visit was the main reason for U.S. Central Command, and Obama appointees to rush such a decision, they were concerned by the fact that Erdoğan could very well talk Trump out of this," another Turkish official said, speaking on condition of anonymity in accordance with the government protocol.

Several U.S. media outlets previously reported that the Raqqa plan was initially designed by the Obama administration, and was put on hold after Trump transition officials warned them about the consequences.

Washington insiders were quick to point out a similar attitude that occurred following the constitutional referendum in Turkey, where the conflicting views of Trump and other officials serving him were revealed.

One day after the vote, the U.S. State Department released a lengthy statement slamming the Turkish government's conduct during the referendum, and the White House Spokesman Sean Spicer followed suit.

A couple of hours later, surprising many in Washington, Trump called President Erdoğan and congratulated him on his election victory, parting from the supposed official line.

Several Obama holdovers in key positions that administer the fight against Daesh have not been fired.

Brett McGurk, the Obama-appointed U.S. Envoy for the Global Coalition to Counter Daesh, is seen too close to YPG by many in Ankara, and also among the architects of the U.S.'s Syria policy in the administration.

McGurk kept his position after intensely lobbying the Trump transition team about his past track record in the George W. Bush administration.

A news report also claimed on Monday that Gen. McMaster previously clashed with President Trump, and declined to fire a list of Obama holdovers at the National Security Council, who were suspected of leaking information to the press.

Bloomberg View, referencing unnamed White House officials, reported that Trump had complained in front of McMaster in intelligence briefings about "the general undermining my policy," and given McMaster less face time.

On Monday, the Americans tried to break the bad news to the Turks with a gesture. U.S. officials invited the Turkish delegation visiting the White House to meet Trump in the Oval Office. Trump and Turkish officials shook hands and pictures were taken.

The positive and energetic manners made Turkish officials wonder whether the decision to arm the YPG was taken by the same person. One Turkish official said the invite echoed in Ankara as an effort to sweeten the bitter pill.

A National Security Council spokesman refused to comment on the Turkish officials' statement, and referred the query to the Pentagon, which officially announced the authorization Tuesday.

The U.S. State Department informed the senior officials in Ankara via a phone call by Secretary of State Rex Tillerson on Monday afternoon.

"Secretary Tillerson subsequently spoke to his counterpart Foreign Minister Mevlut Çavuşoğlu, and other appropriate partners were notified as well," said a U.S. diplomat, speaking on condition of anonymity.