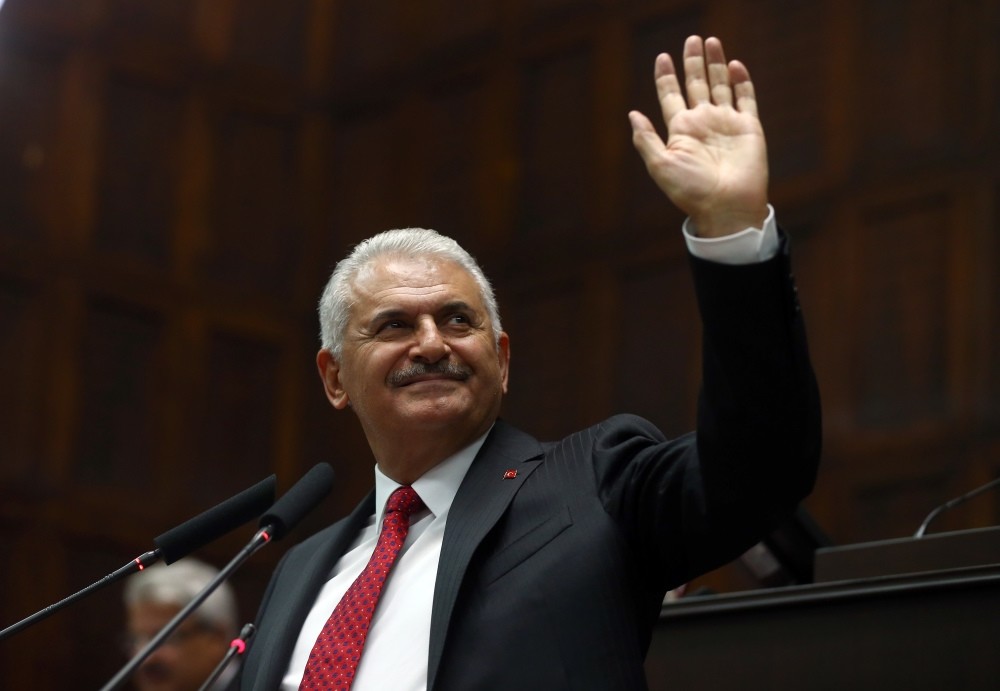 Prime Minister Yu0131ldu0131ru0131m in his partyu2019s group meeting Tuesday said the motto for the AK Party upcoming congress will be u201cNew Initiative Erau201d which will include three main ideas, democracy, change, development.
by Merve Aydoğan May 17, 2017 12:00 am

Prime Minister Binali Yıldırım signaled the new dimensions of the President Erdoğan era within the AK Party in his final parliamentary group meeting Tuesday, stating that it will allow Turkey to further enhance its democracy and economy while developing national unity

The weekly parliamentary group meeting attended by a majority of AK Party deputies along with a large number of provincial organization members, also saw Prime Minister Yıldırım issue his farewell statement. Yıldırım also outlined the new dimensions of the AK Party in the President Erdoğan era, describing the new era with the slogan, "To New Goals with the Nation."

While the AK Party determined its motto for the congress as the "New Initiative Era," Prime Minister Yıldırım stated that the new era will focus on three main areas: namely, democracy, change and development. According to party sources, the congress will be attended by guests from international non-governmental organizations (NGOs) and various diplomatic figures from Ankara. On that note, Yıldırım said the "New Initiative Era" will allow Turkey to further strengthen its democracy and the country's economy while developing national unity. In regards to the country's efforts in the counterterrorism fight, Yıldırım stated that the government will continue its determined efforts against terror until the threat has been completely eliminated both within Turkey's borders and abroad.

The AK Party group meeting witnessed a rather emotional atmosphere during Yıldırım's speech with provincial organization members singing songs and chanting for the prime minister. Addressing a large crowd of attendees, Yıldırım said: "Turkey is ready to embark on broadening its horizons in a terror-free state following the victorious result achieved on April 16 for the entire nation of 80 million. The country will now continue on its journey with a stronger economy that has moved on from an election atmosphere." Underlining that the longing between the AK Party and President Erdoğan has ended following the decision made by the people in the April 16 referendum, the Turkish prime minister summarized the new system of Turkey by describing it as a "system of governance that is dependent on the nation." He also stated that "The specialty of the AK Party's third extraordinary congress is that it heralds in a fully independent Turkey. Our country will once more witness a celebration of democracy [on May 21]. Turkey will become the epicenter of democratic progress with sweeping reform of its regional relations, the economy and its role in the business world."

Yıldırım also added that the AK Party will announce its new manifesto along with its goals in the new era during the extraordinary congress on May 21, noting: "Our third extraordinary congress will usher in Turkey's determined, strong walk towards the future. I invite all those in support of us to attend this monumental meeting and witness a historical moment," the prime minister said. Continuing on with his remarks by noting that Turkey will come face to face with its new president who will also serve as chairman of the AK Party in the coming period, Yıldırım said: "Recep Tayyip Erdoğan is to be the breath and new hope for the country's populace of 80 million and he will be the reflection and the builder of new goals once again." Informing the attendees that new goals and reforms are on the way in the post-referendum period, Yıldırım noted that "The reforms we have begun in the judiciary will become permanently stronger in the coming era." Touching upon the referendum results from April 16 once more, Prime Minister Yıldırım stressed the need for unity and togetherness while reaffirming that "Those who voted 'yes' and 'no' in the referendum are equally valuable to our country. Our primary goal from now on is not to understand those who voted 'yes' but to find and understand the 'no' voters."

'Germany must choose between Turkey and FETÖ'

Meanwhile, relations between Turkey and Germany have become severely strained since Germany granted political asylum to a number of Turkish military personnel and their families who hold diplomatic passports and have suspected links to the Gülenist Terror Group (FETÖ). On that note, Prime Minister Yıldırım called on Germany to choose between Turkey and FETÖ, saying:"Though relations between Turkey and Germany have backtracked as a result of incidents prior to the April 16 referendum, both sides have exerted all efforts and made positive remarks in an attempt to decrease tension. However, Berlin's granting of asylum to fugitives with ties to the plotting of the July 15 coup attempt has brought us to a new low in bilateral relations. Therefore, Germany is at a crossroads and it must make a decision. If [Germany] wants to enhance relations with Turkey and strengthen its historical ties of friendship, then it needs to face Turkey rather than FETÖ," Prime Minister Yıldırım stressed.