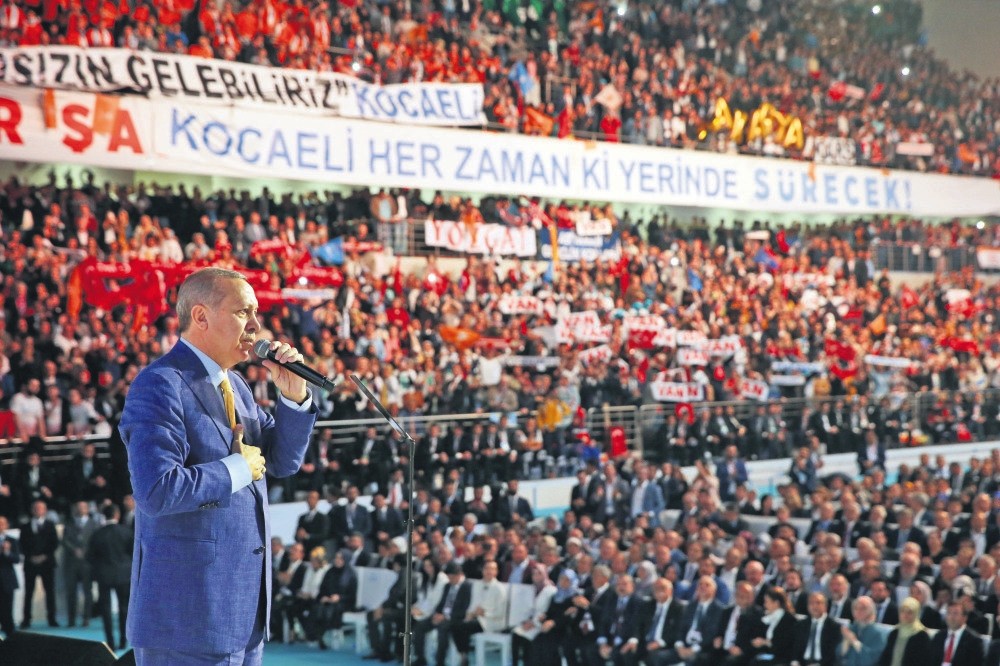 President Recep Tayyip Erdou011fan addresses party members and the public at his party's third emergency congress held Sunday in the capital Ankara.
by Yunus Paksoy May 22, 2017 12:00 am

President Erdoğan pledged further transformation and reform at the party congress as he said Turkey has made enormous developments over the past 15 years with the AK Party ruling; the country's agenda, priorities, problems and expectations have substantially changed

President Recep Tayyip Erdoğan was elected as the new chairman of the Justice and Development Party (AK Party) Sunday at the party's third emergency congress held in the capital city of Ankara. The president opened the congress with remarks on his return to the chairmanship post following a 998-day hiatus, asking, "Where were we?" President and newly elected AK Party Chairman Erdoğan gave significant messages that appealed to the country and the entire world during his speech.

President Erdoğan said that the AK Party will bring both transformation and reforms within the party and nationwide, asserting that Turkey's agenda, priorities, problems and expectations have changed over the past 15 years. "What has not changed is that the AK Party is the only party that fulfills all requirements. The AK Party is prepared to speak up for democracy, transformation and reform." The president asserted that nothing will be able to pull him or his party away from their path, noting: "We have carried out and continue to remain committed to the struggle against FETÖ [the Gülenist Terror Group], the PKK [terrorist organization], Daesh and various terrorist groups in the region." He added, "We will never allow the national security of this country to be jeopardized."

Commenting on the fight against PKK terrorists and their sympathizers. Erdoğan said that Kurdish citizens have realized that the Turkish state - not the PKK – makes sacrifices for them. Pointing to the PKK's urban war strategy of digging ditches and erecting barricades in the middle of streets in 2015, Erdoğan said that the PKK and its armed wing the Peoples' Democratic Party (HDP) has failed to bring their chance of representing themselves to the democratic level.

"Turkey is moving forward and taking firm steps to get rid of the shackles of terrorism," Erdoğan said, adding that more than 65 caves used by the PKK were recently destroyed in the regions of Tendürek, Gabar and Cudi in Turkey's southeast. "The upcoming period includes the goal to eradicate them completely."

Underscoring that FETÖ also poses a national security threat to Turkey and a danger to the entire world, Erdoğan said that the terrorist group infiltrates state institutions in more than 160 countries around the world as it has in Turkey. The president asked why FETÖ leader Fetullah Gülen is given shelter and protected in the U.S. state of Pennsylvania.

Nebi Miş, the policy director of SETA Foundation, spoke to Daily Sabah and drew attention to two major points in Erdoğan's remarks in which one of them signaling reshuffle in the Cabinet as well as within the party and its organizations. "In regards to the reshuffling and revitalizing of the AK Party in the upcoming era, Erdoğan's speech laid out the fine lines of the upcoming changes," Miş stated.

Erdoğan said that the Turkish state has been conducting counterterrorism operations within the framework of laws. "I do not think there is a country in the world that can abide by laws after going through what Turkey has experienced," Erdoğan contended.

The president slammed the West for drifting away from human rights and laws when faced with the slightest threats. "France declared a state of emergency for one-and-a-half years after 15 or 20 terrorists rose up. In my country, on the other hand, terrorists tried to destroy the Turkish state. There were 249 martyrs. How can you tell us to lift the state of emergency? We will not until peace has been restored," he said.

Criticizing the EU, Erdoğan said that the 28-nation bloc has so far put forward benchmarks and conditions that were not asked from other candidate countries. The president asserted that Ankara "does not necessarily have to put up with the EU's double standards."

Erdoğan stressed that either the EU realizes visa liberalization and completes the pledged TL 3 billion (9 billion) for migrants in Turkey, opens more chapters for the full membership bid or Turkey will walk on its own path.

"What we want is to walk on [with the EU]. EU member states will make the decision," Erdoğan said, adding that there is a whole new world ahead of Turkey apart from the EU.

Miş stressed that President Erdoğan's remarks on relations with the European Union (EU) as well as combat against terrorists including the PKK and Gülenist Terror Group (FETÖ) members were significant and it signaled a new policy in the upcoming term.

Prior to his speech, President Erdoğan thanked all participants from across Turkey, foreign mission chiefs and foreign invitees. According to AK Party figures, tens of thousands of people flocked to the capital city to witness Erdoğan's historic return.

A transformation in local AK Party administrations was signaled at the congress, as well. Erdoğan promised that there would be a reshuffle in local administrations by the end of the year. The newly elected chairman insured that this congress would mark the birth of a new era for the AK Party.

The Turkish-language Habertürk daily Ankara Chief of Bureau Bülent Aydemir told Daily Sabah that the speech was "visionary" and "inclusive."

He also noted that Erdoğan's speech indicated a continuation of determined counterterror operations as Aydemir added that the speech determined the road map of Turkey's new governing system, the presidential system.

Prime Minister Yıldırım underscored that Turkey's counterterrorism efforts will continue unabated in the upcoming period. "Everybody shall know this very well: The struggle against FETÖ, the separatist terrorist organization [the PKK], Daesh and all terrorist groups are a matter of independence and future. This struggle will carry on with the same determination."

The prime minister asserted that there is not a single country in the world like Turkey that fights at least three terrorist groups at the same time. Stressing that Operation Euphrates Shield, which was carried out in Syria from August 2016 to March 2017, ensured the national security of Turkey and prevented hostile attacks from abroad.

"No table can be formed [in the region] without Turkey. No political deals can be made," he added.

Yıldırım signaled permanent stability in the AK Party and the country as well. He underlined that the AK Party government will continue to undertake democratic and economic reforms. "We will take the necessary measures to speed up providing the services that our citizens have been waiting for," he said.