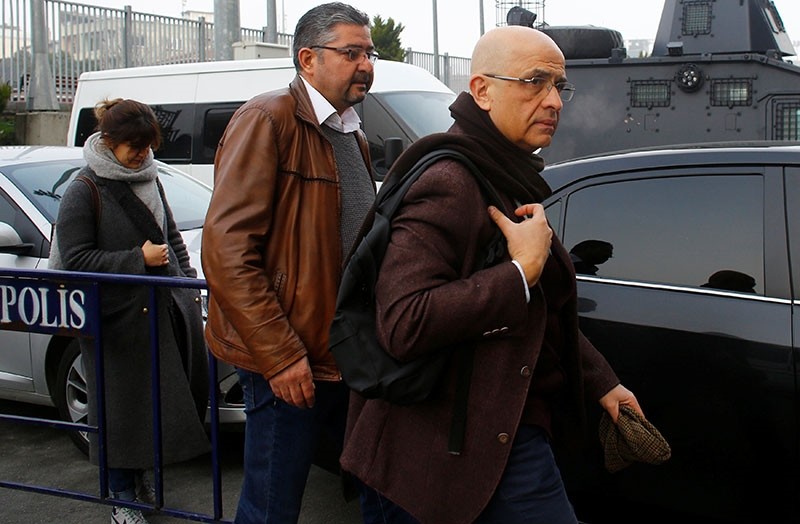 The prosecutor had previously asked for a life sentence for Berberoğlu on charges of helping the Gülenist Terror Group (FETÖ) in the espionage case.

Istanbul's 14th Heavy Penal Court ruled to sentence Berberoğlu to 25 years in jail for releasing secret documents with the purpose of political or military espionage. Berberoğlu was arrested in the courthouse after the hearing. He will remain under arrest while waiting for the appeal process to conclude.

The court also ruled that Berberoğlu's files would be separated from those of former Cumhuriyet newspaper Editor-in-Chief Dündar and its Ankara representative Gül, who have both been charged with willfully aiding a terror group without being a member.

The CHP's Central Executive Committee convened for a meeting right after the court decision. CHP deputies also left the general session at the Parliament to protest the decision against Berberoğlu.

Facing charges in the MİT trucks case, Berberoğlu was among the deputies that lost their parliamentary immunity last year, when a government-sponsored bill stripped the protection from 138 lawmakers with pending charges. Although disagreeing with the bill in principle, the CHP did not block the bill at the general assembly, which was directly passed by the Parliament with 376 out of 550 votes.

So far, 13 deputies from the Peoples' Democratic Party have been arrested in lawsuits related to their ties with the PKK terror organization and its attacks in Turkey. Berberoğlu is the first deputy from the CHP that will be arrested.

Speaking on the issue in front of the Çağlayan courthouse, CHP deputy Engin Altan criticized Berberoğlu's arrest, saying that the decision is "politically motivated" and that it "aims to intimidate the opposition." However, Altan did not make any comment about the case and Berberoğlu's disclosure of confidential information to Dündar.

In January 2014, trucks belonging to MİT carrying aid to northern Syria, where Turkmens had been exposed to heavy airstrikes and attacks under the Assad regime, were stopped and intercepted by security forces upon the order of former Adana Public Prosecutor Özcan Şişman and Brigade General Hamza Celepoğlu.

The supplies in the trucks were seized and MİT staffers were handcuffed before they were detained. The case stunned the nation as it was the first time that the army explicitly intervened with Turkey's intelligence agency. The operation was conducted hurriedly and the governor of the province was informed about the incident in its latest phase.

Gen. Celepoğlu's intense ties with FETÖ were revealed when he was appointed to a senior post in the ranks of gendarmerie forces under the auspices of "duty lists" prepared by the terror group for the post-coup period. Along with the so-called "MİT trucks" case, Celepoğlu was also found guilty of negligence and for his role in covering up the murder of Armenian journalist Hrant Dink in 2007, for which he was sentenced to life in prison. Along with Celepoğlu, another person who ordered the intervention with the MİT truck, public prosecutor Şişman, was also arrested.

Nearly one-and-a-half years later after the case, Dündar and Gül published photos of the raid in 2015, claiming: "Turkey illegally supplied arms to opposition groups in Syria."

Despite his claim in the Cumhuriyet newspaper, when Dündar was asked by the court what evidence he had to base such claims upon, he answered: "I don't have any information or document which proves whether those aid trucks were going to the illegal organizations [in Syria] or not," according to his plea.

The two men were released pending trial after they were accused of espionage and aiding FETÖ.