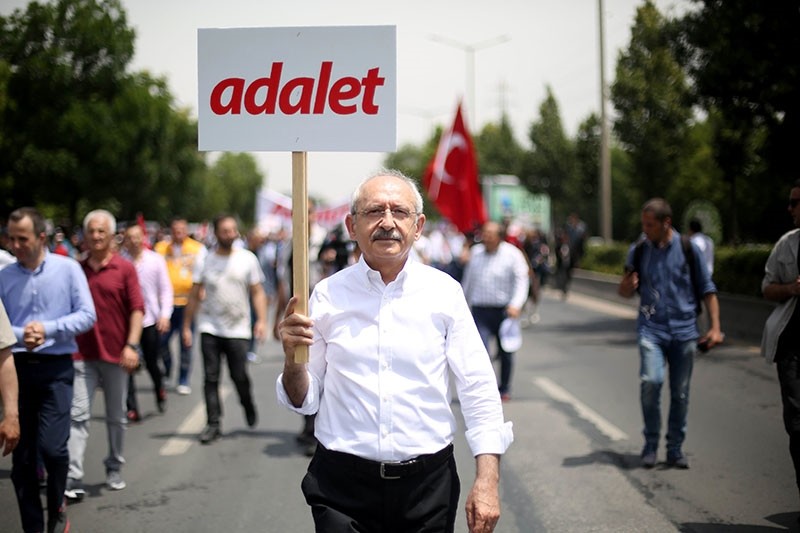 The leader of Turkey's main opposition party has launched a 400-kilometer march from Ankara to Istanbul Thursday, a day after one of its deputies was given a a prison sentence on espionage charges.

CHP officials criticized the court decision, describing it as politically motivated and as a means to intimidate the opposition.

Berberoğlu was arrested after the hearing and was transferred to Maltepe Prison in Istanbul, which was announced as the ending point of Kılıçdaroğlu's march. Party officials said they estimate the 400-kilometer walk could take the 68-year-old politician at least 20 days.

Before embarking on his march, Kılıçdaroğlu said that the event has nothing to do with a political party, and called on everyone seeking justice to support the march. "Everyone who wants justice has to support this march," he said. "There cannot be justice in a country where prisons are overcrowded."

"We do not want to live in a country where there is no justice," Kılıçdaroğlu told reporters.

"We want to live in peace in our own country, like any free or civilized country."

He was accompanied by CHP executives and supporters as well as family members.

He also accused the government of establishing a "dictatorial" regime through the state of emergency, which was imposed on July 20, 2016 in the aftermath of the coup attempt carried out on July 15 by FETÖ, and continues to this day amid terror threats Turkey faces on multiple fronts.

Many people held banners, waved Turkish flags and wore t-shirts emblazoned with the word "Justice." Others carried posters of Mustafa Kemal Atatürk, the secular founder of modern Turkey, and the CHP.

Police imposed tight security measures in Güvenpark and along Kılıçdaroğlu's route, setting up security barriers and sealing off nearby roads, as well as carrying out searches with bomb disposal teams and dogs. Water cannons and armored police vehicles were also present near the park.

Since he became a prominent figure in politics, Kılıçdaroğlu was associated with Indian independence leader Mahatma Gandhi, giving him the nickname "Gandhi Kemal." The march decision to Istanbul was likened to Gandhi's salt march.

Berberoğlu is the first CHP deputy to be imprisoned recently. Around a dozen lawmakers from the Peoples' Democratic Party (HDP) are currently jailed, mostly awaiting trial over alleged links to the PKK terror group.