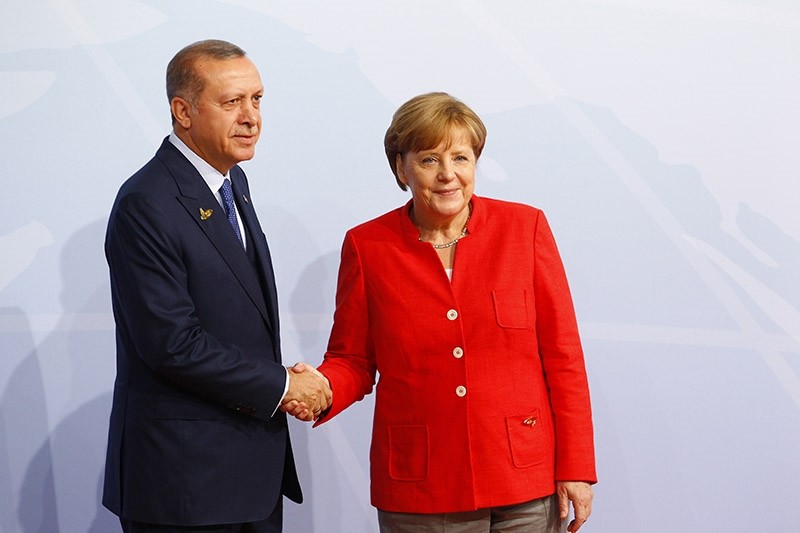 German Chancellor Angela Merkel stressed Saturday the gathering at the G20 summit "honored" Turkey's role in managing the migrant crisis driven by Syria's civil war and other conflicts, adding that President Recep Tayyip Erdoğan had engaged in the talks.

"Turkey and President [Recep Tayyip] Erdooğan showed a lot of commitment. He was very much engaged on the whole agenda of the summit and gave his contribution," Merkel told a news conference at the end of the two-day summit in Hamburg.

"We also paid tribute to Turkey's efforts for the refugees, and he also pointed out these efforts again during the discussion round on migration," she added.

Merkel recalled that she and Erdoğan held a bilateral meeting on Thursday on the sidelines of the summit, where they discussed recent political disagreements between the two countries.

"This meeting has shown that we have profound differences," she said, and stressed that they had openly discussed these differences, rather than "sweeping them under the carpet".

Relations between Turkey and Germany first became strained when local authorities canceled public appearances of Turkish ministers and government officials campaigning ahead of the April 16 referendum in several different German towns and cities. Officials based the cancellations on poor excuses such as inadequate parking lots and security concerns; however they allowed no-campaigners and PKK sympathizers to rally.

Other disputes center on Germany's decision to withdraw its troops from the Incirlik Air Base in southern Turkey and on German-Turkish journalist Deniz Yücel, who was imprisoned by Turkey on terror charges earlier this year.

Turkey did not allow German lawmakers to visit their soldiers stationed at Incirlik, due to controversial statements, mostly made by lawmakers from the socialist Die Linke party (The Left) who publicly announced their support to the PKK, which is listed as a terrorist organization by Turkey, the EU and the U.S.

The latest dispute came up when German opposed to Erdoğan's official request to hold an event to address Turkish citizens living in Germany on the sidelines of the G20 summit.

German Foreign Ministry spokesperson Martin Schaefer also announced that government representatives from within the European Union were excluded from the ban, and added that the new rule was communicated to all foreign embassies in Berlin.

On the eve of the summit, Erdoğan warned that Germany was "committing political suicide", by refusing to let him address members of the large Turkish community in the country.

"Germany must correct this error," Erdoğan said in an interview with weekly magazine Die Zeit, arguing that "he could not be silenced".