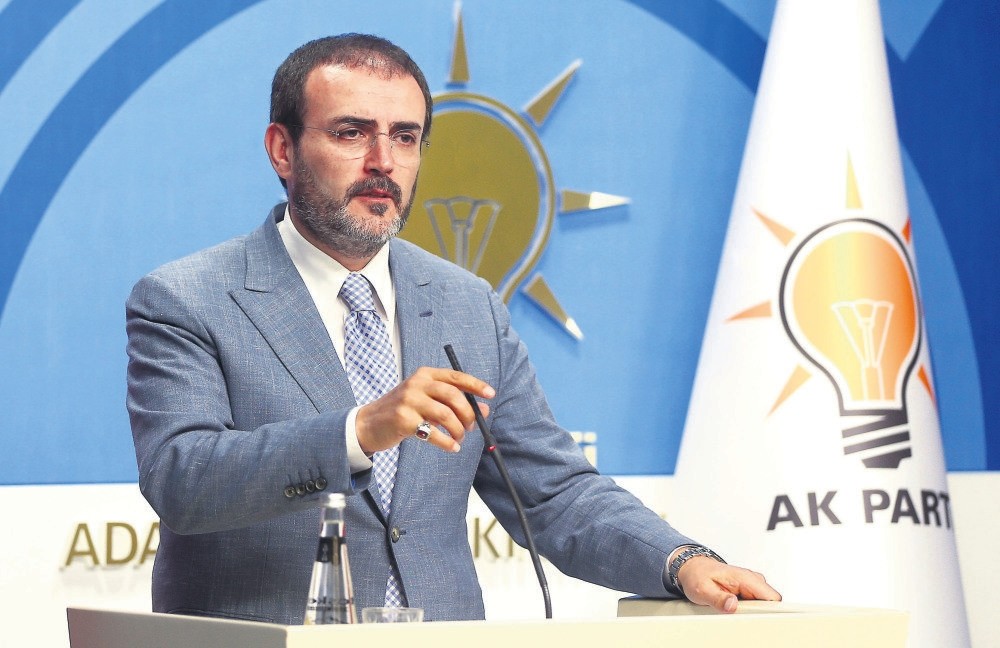 Ak Party Spokesperson Mahir u00dcnal said: ,It's illegal to call on the masses to hit the street against the government everywhere in the world.
by Daily Sabah Jul 11, 2017 12:00 am

Spokesman for the ruling AK Party said opposition leader Kılıçdaroğlu, who just completed his protest march from Ankara to Istanbul, is ‘playing a dangerous game,' ignoring votes and the will of the more than 20 million people by disregarding Parliament and elections

Speaking to the press on Monday in Ankara, spokesman Ünal condemned Kılıçdaroğlu who called people to the street to protest against the government. "Kılıçdaroğlu and his friends should know that if you are ignoring more than 25 million people's vote by leaning toward 100,000, this is fascism," Ünal said. "You cannot declare the elected legitimate government to be illegitimate, and this nation will not allow you to do it." Mahir Ünal also called on Kılıçdaroğlu to be respectful of Parliament and politics: "Justice is not sought in the streets. Kılıçdaroğlu, who ignores the people's will, elections and ballot boxes and who calls for a revolt against the government, just wants to spark anarchy in society."The CHP leader began a 350-kilometer (217-mile) trek on June 15 following the imprisonment of CHP lawmaker Enis Berberoğlu, who was sentenced to 25 years in prison for giving information to a newspaper on the alleged transportation of Turkish arms to Syria. He concluded his march Saturday in Istanbul.

Prosecutors implicated Berberoğlu for sharing confidential information with a Turkish daily on the alleged transportation of arms. He is the first CHP deputy to be imprisoned in recent years.

Ünal also criticized Kılıçdaroğlu for playing a "dangerous game" by calling on the masses to hit the streets in protest of the government. "It cannot be allowed to destroy democracy by using democracy anywhere in the world. It is illegal everywhere in the world to call the masses to the streets against the government. There are parliaments and elections to prevent chaos in the streets because it has been proven throughout history that the street cannot bring justice and, therefore," he said. Ünal continued to slam Kılıçdaroğlu, who accused the AK Party of being a dictatorship and compared it with examples from the 1940s. "Could [Kılıçdaroğlu] realize such a march in 1940s Germany?" he said.

After arriving in Istanbul, Kılıçdaroğlu attended a 6 p.m. rally in Istanbul's Maltepe district.The government and opposition Nationalist Movement Party (MHP) have both criticized the CHP leader, calling the march an attempt to create chaos and unrest. They urged the CHP to seek justice through legal means and Parliament.