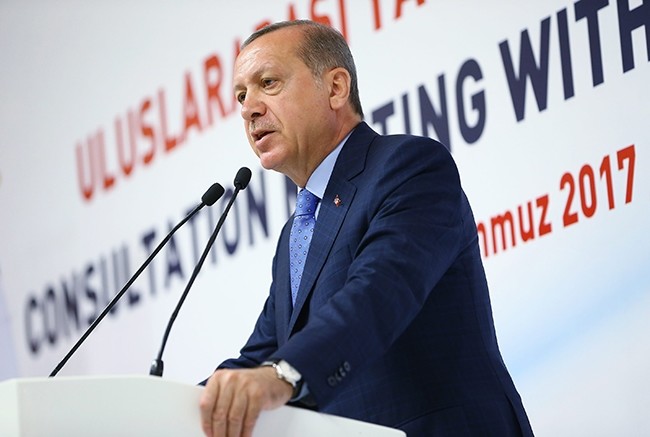 "I ask, how else would a country react to an organization that has martyred nearly 2000 of its security forces in the last two years, and one that has been oppressing, being cruel to, and doing an ethnic cleansing in areas under its control in Syria?" Erdoğan said, speaking about the PKK and its Syrian affiliate YPG, during an event for foreign investors organized by Union of Chambers and Commodity Exchanges of Turkey (TOBB).

"Think of an organization that closes the bridges in New York and kill those who nears them, moves forward with its tanks on streets of London by running over vehicles, and people and bombs the parliament in Berlin, police headquarters in Rome, municipality building in Brussels," Erdoğan said, referring to the attacks of FETÖ-linked putschist soldiers on people and state buildings during the July 15 coup attempt.

Ankara has criticized Turkey's Western allies for not showing timely reaction to the coup attempt and also for not taking concrete measures against FETÖ members in their countries, including their extradition. Erdoğan's comments were made upon frequent criticism coming from the West on Turkey's crackdown against the suspected members of FETÖ after the failed coup attempt.

"At the same time, think of another group within your borders and right outside of your borders that kills your citizens, harasses your land, and frequently attacks your soldiers. What would the countries of the companies your represent would do? I know for sure that they would do more than what Turkey has been doing."

The president also underlined that all operations and investigations are being carried out within the rule of law and in transparency, adding that the current state of emergency could be lifted in the not too distant future.

According to Erdoğan, the state of emergency was in place only to assure that Turkish citizens lived in peace.

"We will end [the state of emergency] when it is no longer needed in our fight against terror. The FETÖ cases have slowly started take a shape. We also made progress in struggle against the PKK. Therefore, it is possible that the state of emergency, which [Turkey] applies in a very limited area, would be lifted in the not too distant future," Erdoğan said.

The failed coup attempt, which left 249 people dead and nearly 2,200 injured, was organized by followers of the Gülenist Terror Group (FETÖ) led by Fetullah Gülen, who has lived in self-imposed exile on a 400-acre property in the foothills of the Pocono Mountains in the U.S. state of Pennsylvania since 1999.