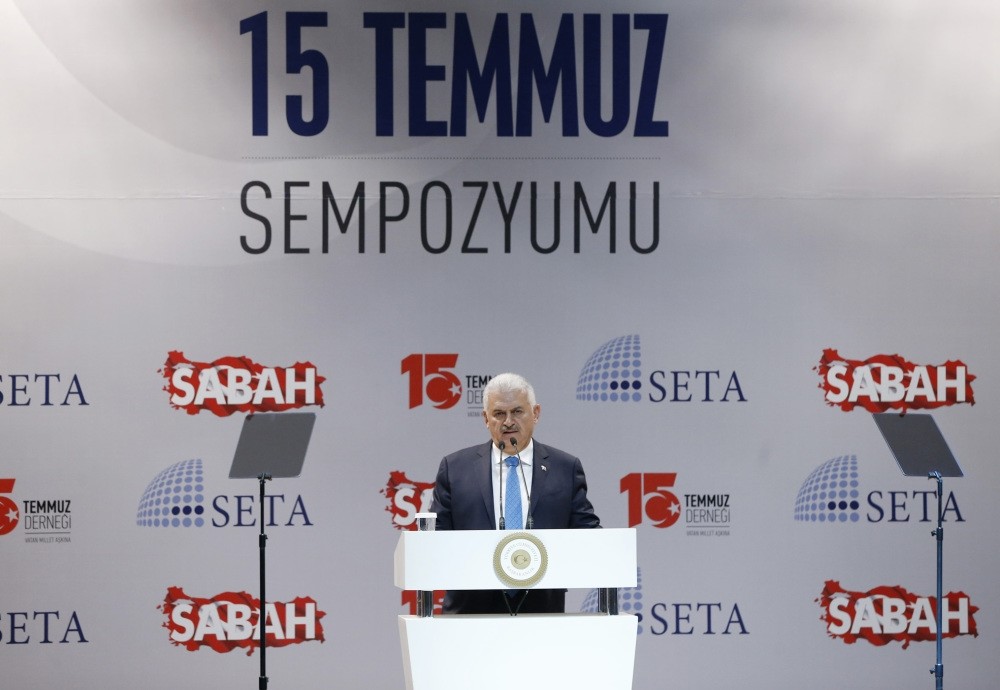 Prime Minister Binali Yıldırım Wednesday criticized main opposition parties for claiming that the July 15 coup attempt was a "controlled" coup, describing the situation as the "abdication of reason".

Speaking at the International July 15 Symposium at the Foundation for Political, Economic and Social Research (SETA) in Istanbul, Yıldırım said the "sacred struggle" that began on the night of July 15, 2016 marked the initial step in the fight against the Gülenist Terror Group (FETÖ). "The second step will be the complete discharge of the cult," he said.Presidential spokesman İbrahim Kalın, who spoke on the symposium panel "The meaning of the July 15 coup attempt", also criticized opposition parties for their stances on the coup attempt.

"They are diluting the coup attempt by acting as if the perpetrator is an ambiguous force," he said, adding that if those who sacrificed themselves for their country on the night of the coup attempt did so as the result of 15 years' of social development in Turkey. Kalın also criticized the West, saying that if Western countries had been sincere in their supposed support for democracy, they would have stood alongside Turkey in the wake of the coup attempt.

"If this had been a controlled coup, the government would have captured and imprisoned all the coup plotters in the days after the coup. However, many of the coup plotters managed to flee to other countries, going abroad undetected by the government, even up to two weeks after the failed coup attempt," Professor Hüsamettin Aslan, an academic at Uludağ University, said, echoing criticism of the opposition's stance on the issue.

While Kemal Kılıçdaroğlu, the chairman of the main opposition Republican People's Party (CHP), declared his support for the government following the failed coup attempt, he also issued controversial statements in its wake, saying that it was controlled.Meanwhile, Erdoğan blamed Kılıçdaroğlu for being disrespectful, referencing what he said about the coup attempt. "Regardless of who I am, I can say that what Kılıçdaroğlu says and does are disrespectful to our martyrs and what they left behind, to veterans, to the millions who went out to the streets on that day, to our Parliament, to the judiciary and the government itself," Erdoğan said, adding that these attitudes of the CHP leader only benefit FETÖ and other terrorist organizations."We have waged a determined struggle against FETÖ over the past year," Yıldırım went on to say in his speech, indicating that in one year, there has been a big clearance movement both in public offices and in the military in order to eradicate the FETÖ members who have infiltrated state institutions.

"FETÖ members were dismissed from their public duties through the delegated legislation. FETÖ members in the Turkish Armed Forces [TSK] have also been dismissed, to a large extent," he said. Yıldırım also expressed his confidence in the continued fight against FETÖ.

Since the coup attempt last year, Turkey has arrested tens of thousands of suspected FETÖ supporters and dismissed more than 100,000 public servants from positions in the government.

Regarding the political wing of the organization, Yıldırım said that although they receive questions implying that nothing is being done to eliminate the political wing of FETÖ, when one looks at Turkey's political history, it can be clearly seen that only two people have fought against this cult: Former Prime Minister Necmettin Erbakan and President Recep Tayyip Erdoğan.

Professor Burhanettin Duran, the general coordinator of SETA and a columnist with Daily Sabah, emphasized the importance of the coup attempt, calling it one of the three most critical moments in the history of the Republic alongside its foundation in 1923 and the introduction of the multi-party system.

Another speaker at the panel, Atilla Yayla, the founder of the Association for Liberal Thinking and a faculty member at Medipol University, praised the public for its resistance to the coup attempt. "After this coup, the learned helplessness of our society against coups disappeared," Yayla said, adding that it is possible to see instances of unjust treatment in this period of discharges, especially among the base of FETÖ members unless the main brains of the cult are scattered.