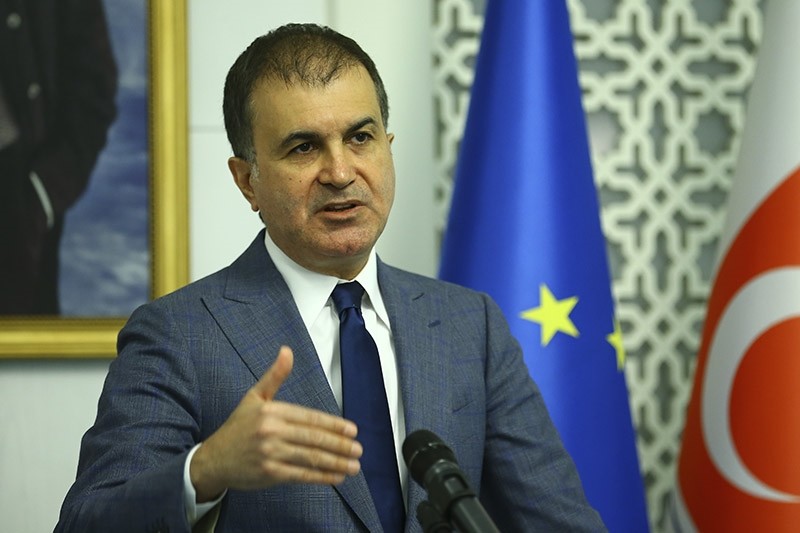 The Minister for European Union Affairs and Chief Negotiator Ömer Çelik underlined the strength of Turkish citizens' resistance against last year's July 15 failed coup attempt, saying that their struggle for democratic values has become a symbol for those fighting for democracy all over the world, in an article penned for the EU Observer.

Çelik's article published Friday by the Brussels-based European online newspaper, focused on Turkey's political history marked with "several coups and various types of military interventions against the will of the people," and its continuous aim to uphold democracy and the rule of law for the sake of Turkish citizens.

Çelik reminded, however that the coup attempt organized by the Gülenist Terror Group (FETÖ) was the deadliest one of all previous coups and interventions, during which putschist soldiers directly opened fire upon unarmed citizens and even bombarded the parliament.

Showing the resistance against FETÖ as an example, the EU minister underlined that the coup attempt united the people of Turkey, including opposition parties and civil society organizations.

Çelik also underlined that after the failed coup attempt, Turkey took necessary measures to ensure a more democratic system for its citizens, immediately removing FETÖ members who had infiltrated state structures from their posts.

"Thousands of clandestine members of FETÖ have been dismissed from the state services, mainly from the army, the judiciary and the police force," he said, adding that Turkey has become a more transparent state.

The EU minister called the current emergency rule in Turkey as a necessity for the "fight against such a complex network," adding that it was the only option to cope with such "extraordinary situations."

Commenting on the April 16 constitutional referendum in Turkey, Çelik said that the high participation rate of around 86 percent was a demonstration of Turkey's democratic process.

Çelik said that the harsh and unjust criticism voiced by some parts of the international community disappointed Turkey, which expected full support, solidarity and understanding from its allies after the coup attempt.

Çelik also called the European Union's decision to halt accession talks and to place Turkey under political monitoring a mistake, which was caused by the ignorance of the EU regarding latest difficulties Turkey was facing after the coup attempt.

Underlining that terror motivated attacks have increased around the world recently, Çelik said that there "should be no discrimination between different forms of terrorism and various terrorist organizations whether it is Daesh, PKK or FETÖ."

"It should not be forgotten that, despite this upheaval, Turkey continues to host more than 3 million refugees, mostly from Syria, and has undertaken an enormous burden," the EU minister stressed, saying that Turkey never used the coup attempt or terror attacks as an excuse to disregard international commitments, expecting other to do the same.

Çelik also called on the international community to help Turkey in its fight against FETÖ, saying that most of the coup plotters are now residing in the U.S. and EU member states or seeking asylum.

"As a candidate for EU membership and part of all western institutions, we believe that more support for upholding universal values within our struggle will enhance mutual trust and solidarity," he said.