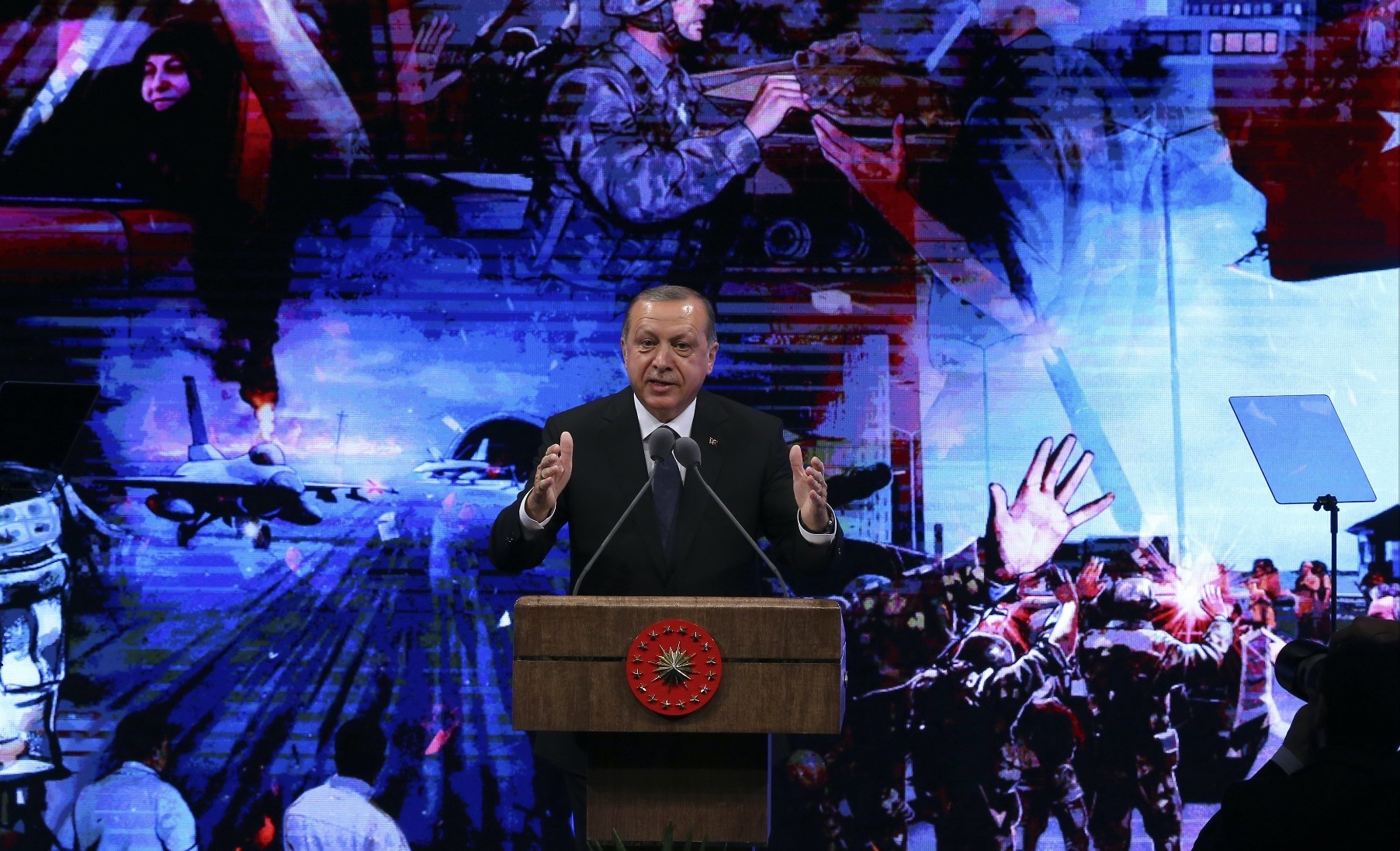 Erdou011fan said the West takes a stance against Turkey when it comes to freedoms after some ministers were banned from attending July 15 events across Europe.
by Daily Sabah Jul 14, 2017 12:00 am

Turkey's Western allies act hypocritically when it comes to rights and freedoms in matters related to Turkey, President Erdoğan says

President Recep Tayyip Erdoğan criticized Thursday the West for having double standards and being hypocritical on rights and freedoms when it comes to Turkey. Speaking in Ankara during an event marking the failed July 15 coup attempt, Erdoğan commented on the recent decision by the United States to ban banners on July 15 and some European countries' banning Turkish ministers from attending July 15 events organized by the Turkish community.

"We see the U.S. does not allow July 15 posters displayed on subways. We see similar things in Europe. We went to the G20 summit and wanted to meet our citizens in hall meetings. The applications were submitted, however, they did not allow the president of Turkey, they did not allow the ministers. When it comes to it, they talk about freedoms. What kind of freedom is this?" Erdoğan said.

The president added that Turkey had gone through a coup attempt aiming to overthrow the government, while Hamburg was only witnessing incidents for a few days. He added that even some of those committing violent actions in Hamburg were PKK followers who had gone to Germany from Turkey.

"The West asked documents from us. What more documents do you want? We have 250 martyrs and 2,193 veterans. What documents are you talking about?" he added.Ankara claims that concrete evidence has been submitted to Western allies for the extradition of FETÖ members in their countries, however due to political reasons, there have been no legal steps taken against FETÖ members.

On July 15, a small military junta linked to FETÖ attempted to topple the democratically-elected president and government in Turkey and impose martial law.

The attempt was prevented by military troops loyal to the government, along with police units and millions of Turkish citizens taking to the streets in favor of democracy.

In total, 249 people, mostly civilians, were killed by pro-coup soldiers, while over 2,000 people were injured.

Speaking at the event before President Erdoğan, Prime Minister Binali Yıldırım underlined that Turkey entered into a new era after the July 15 coup attempt was defeated.

"We are now in a new period. In this period, the tutelage and the homeland is owned by the people. In this new period, the people will see that this FETÖ murder network, which has no holy values, will be defeated."

The prime minister also said that those behind the coup attempt will pay for their crimes within the rule of law. He added that despite FETÖ members' acts during the trials, claiming that they were not behind the coup and denying the facts, will pay the price for their actions.

"We will overcome this matter without compromising democracy, rights and freedoms, laws, and justice," Yıldırım said.Meanwhile, Chief of Staff Gen. Hulusi Akar underscored that the coup was stopped because the people and security forces were united and that those who betrayed the armed forces will be receiving the heaviest punishment possible within the rule of law.