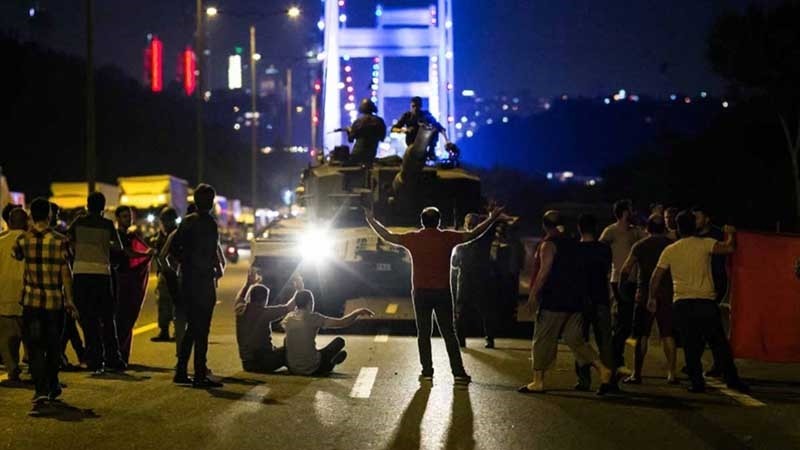 This file photo shows Turkish people standing up against putschist soldiers on the July 15 Martyrs' Bridge (Formerly known as the Bosporus Bridge) (AFP Photo)
by Daily Sabah Jul 15, 2017 12:00 am

The U.S. State Department hailed the bravery of Turkish people who took to the streets to protect their democracy from a brutal coup attempt by Gülenist Terror Group (FETÖ)-linked soldiers July 15, 2016.

In a statement issued Friday, the State Department Spokesperson Heather Nauert reiterated U.S. support for Turkey's democracy, as she commended Turkish people for their determination.

"One year ago, Turkey's brave and dedicated citizens of all backgrounds and political views defended their democracy against an attempted coup" Nauert said.

The spokesperson added that the actions of those who took to the streets on July 15 remind everyone about the fact that the preservation of democracy requires "perseverance, tolerance, dissent and safeguards for fundamental freedoms," adding that diversity is necessary in such challenging periods.

"We offer our condolences to the friends and loved ones of those injured or killed during the coup attempt" the statement said.

The terror group is also accused of orchestrating a long-running campaign to infiltrate Turkish state institutions, including the military, judiciary and police with the ultimate goal of taking over.