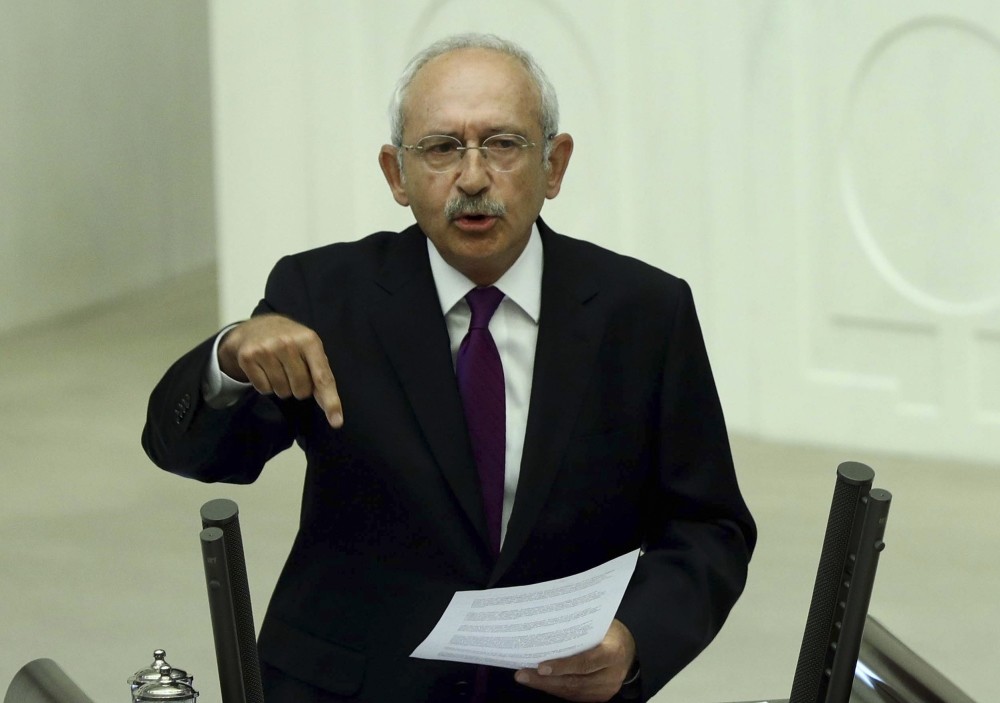 Earlier this month, Ku0131lu0131u00e7darou011flu completed his protest march, which was launched after CHP Istanbul Deputy Enis Berberou011flu was sentenced to 25 years in prison for leaking secret documents belonging to Turkish intelligence.
by Yunus Paksoy Jul 18, 2017 12:00 am

Main opposition CHP leader Kılıçdaroğlu's recent remarks in a British daily revealing his determination to ‘drag down President Erdoğan' and increase street protests may divide the public and increase instability in the country, experts says

Experts told Daily Sabah that Republican People's Party (CHP) Chairman Kemal Kılıçdaroğlu's remarks in a recent interview with The Times, a British daily, that he is determined "to drag [President Recep Tayyip] Erdoğan down from his palace" and increase the number of street protests may put obstacles in the way of the functioning of the Turkish state and polarize the public.

Kılıçdaroğlu's pledge to "drag down" Erdoğan and organize more street protests across Turkey, similar to his recent justice march, has been interpreted by some experts as a way of damaging the functioning of the state and polarizing the already fragile public.

"I am not afraid. There is a serious lack of democracy in this country [and] someone needs to fight against this. Our main goal now is to drag Erdoğan down from his palace. We are determined to do this," Kılıçdaroğlu said in an interview with The Times, adding that he was "prepared to carry out more street protests.""The aim of the street protests is obvious: To prevent Recep Tayyip Erdoğan one way or another and make him unable to function as the head of the state," said Mustafa Altunoğlu, an academic at Anadolu University focusing on the CHP.

Altunoğlu contended that the goal of Kılıçdaroğlu's further street protests would be the same as the Gezi Protests in 2013, the Dec. 17-25 judicial coup attempt by the Gülenist Terror Group (FETÖ) and the e-memorandum from the Turkish military on April 27, 2007.

Tanju Tosun, an academic at Ege University who specializes in CHP politics, said Kılıçdaroğlu's justice march ended with no serious backlash or public dissent thanks to the composure of the political authorities, bureaucracy and protestors.

"However, if Kılıçdaroğlu holds future protests with the aim of dragging down President Erdoğan, the public and political authorities may not welcome it," Tosun said, adding that it would further polarize society.

Erdoğan previously criticized the opposition leader for what he said was obstructing justice as he opposed a legal decision, accusing him of working against separation of powers.Referring to Article 138 of the Constitution, which states, "No organ, authority, office or individual may give orders or instructions to courts or judges relating to the exercise of judicial power, send them circulars or make recommendations or suggestions," Erdoğan said Kılıçdaroğlu was clearly violating the law.

The president said that it was a gesture of the government that Kılıçdaroğlu was able to complete his 400-kilometer march from the capital Ankara to Istanbul.

The march came as a protest after CHP Istanbul Deputy Enis Berberoğlu was sentenced to 25 years in prison for leaking secret documents to the press in the controversial National Intelligence Organization (MİT) trucks case.

Berberoğlu was accused of supplying confidential footage of a raid on MİT trucks carried out by FETÖ, to the Cumhuriyet daily's former editor-in-chief, Can Dündar, and its Ankara representative, Erdem Gül.

Despite Kılıçdaroğlu's criticism of the Turkish state, saying that Erdoğan is steering Turkey into an authoritarian regime, Altunoğlu said that his march would have been impossible in such a country.

"[Kılıçdaroğlu's criticism] does nothing but make Turkey vulnerable to interventions from foreign powers," he claimed.

Kılıçdaroğlu also slammed Erdoğan in the interview, accusing the president of staging his own coup after the July 15 events.

"We are against the July 15 coup attempt. We call it the people's fight for democracy. And then there's the palace's July 15," Kılıçdaroğlu was quoted as saying.

Tosun said the only way to drag down Erdoğan from power at the ballot box.

"I am not sure which ways there are to strip him of his powers," he said, adding that Kılıçdaroğlu will try to keep the opposition dynamic until the 2019 elections.

He claimed that the justice march was an attempt to bring different sections of the opposition together, including FETÖ members, center-right figures, leftist groups and liberals that are all against the Justice and Development Party (AK Party).

"The justice march was a reflection of the effort to bring everyone against the AK Party together to create a united front," Altunoğlu said.

Pro-PKK Peoples' Democratic Party (HDP) Co-Chair Serpil Kemalbay said in late June that they would show concrete support for Kılıçdaroğlu's march. In line with her statement, some party figures marched with the CHP leader in a signal of togetherness against Erdoğan and the government.

Meral Akşener, a staunch opponent of the AK Party and Erdoğan, also voiced support for the march. She is a former member of the Nationalist Movement Party (MHP) who was expelled last year due to her intra-party dissent against Chairman Devlet Bahçeli.

"It might be a joint strategy of the CHP and other dissenting circles," he added.

Kılıçdaroğlu previously came under fire from dissenting voices within his party. He was criticized for his repeated failure in elections and referendums to Erdoğan and the AK Party. The march seems to have restored his charisma in the party.

"The CHP, for the first time in history, got the chance to determine the agenda of Turkey," Altunoğlu said, referring to Kılıçdaroğlu's march.