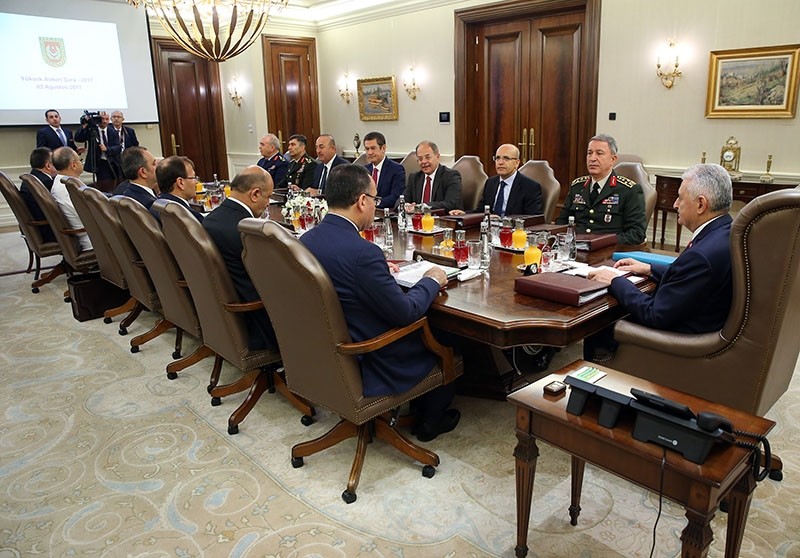 Army, navy and air force commanders have been replaced with new generals in a high-level meeting of Turkey's military and civilian leadership, President Spokesperson İbrahim Kalın announced at a press conference Wednesday.

The decisions made at YAŞ gathering were announced by Kalın after being ratified by President Recep Tayyip Erdoğan.

YAŞ members first visited the mausoleum of Turkey's first president, Mustafa Kemal Atatürk, before going to Çankaya where the meeting is being held.

"Ongoing instability along the countries on our southern border, as well as the lack of proper governance and civil war pose the biggest threat to our fight against terrorism" Yıldırım said, adding that it is also crucial to carry out economic social rehabilitation projects during security operations.

He also noted that the constitutional changes, approved in a recent referendum will allow the Turkish state to overcome critical domestic and international developments amid ongoing conflict in the region.

President Recep Tayyip Erdoğan is expected to host a dinner for YAŞ members at the Beştepe Presidential Complex Wednesday evening.

YAŞ meeting is a bi-annual gathering which discusses the appointments and retirements of high-ranking staff officers and generals, as well as the removal of military personnel.

In the aftermath of last year's failed coup attempt by the Gülenist Terror Group (FETÖ), the government restructured YAŞ, handing more seats to Cabinet ministers and reducing the military's representation.

The military was brought under further government control after the July 15 coup attempt, and the commanders of the Army, Navy and Air Forces were ordered to answer directly to the Defense Ministry.

In addition, the president and prime minister were given the authorities to issue direct orders to military commanders without the need of any prior approval.

According to military sources, the fight against FETÖ, the status of the chief of general staff and other commanders would likely top the council's agenda Wednesday.