‘Turkey has a big role to play’ in Syria, US Secretary of State Tillerson says 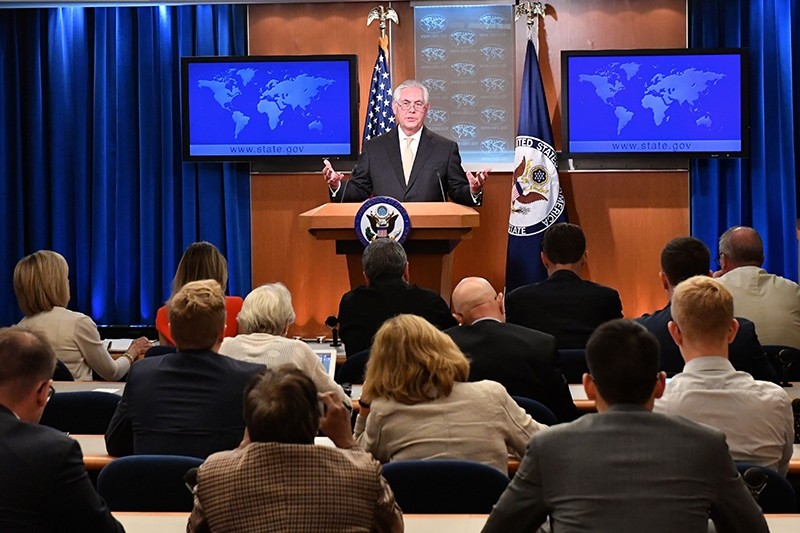 Speaking about the situation in Syria and related peace processes, Tillerson said that there were two conflicts underway in Syria: the war against Daesh and the civil war "that created the conditions for [Daesh] to emerge," which is why the U.S. had been hoping to avoid the outbreak of civil war.

Tillerson reaffirmed U.S. support for the Geneva process and vowed to work with "the neighbors in the region as well as those stakeholders in Syria," adding that he wanted to recognize Ambassador John Bass in Turkey for his work in the region.

"Turkey has a big role to play in this. As you know, our relationship with Turkey is a bit under stress as well, and Ambassador Bass has been most helpful and remarkable in how he's led our efforts there in Ankara," the U.S. Secretary of State said.

He also acknowledged special envoy to the war against Daesh, Brett McGurk, who came under fire in Turkey recently, for his work "on the ground."

Speaking at a panel on U.S. President Trump's fight against terrorism in the Middle East Institute in Washington on Friday, McGurk claimed that Idlib had turned into a "safe zone for al-Qaeda terrorists on the Turkish border."

McGurk also attributed the al-Qaeda-linked terror group's power to obtaining weapons and foreign fighter flow, also mentioning that the U.S. intended to work with Turkey to close down the northeastern border to recruited militants.

Ankara, in turn, slammed McGurk's "provocative" remarks for making a connection between Turkey and the presence of terror groups in the area.

Relations between Turkey and the U.S. have been strained recently because of Washington's continuous support for PYD militia in Syria.

Turkey considers the PYD and its armed wing the YPG to be Syrian offshoots of the PKK terror group, which is listed as a terrorist organization by Turkey, the U.S., and EU.

However, the U.S. considers the YPG militia to be an effective force in the fight against Daesh in Syria, while Turkey, a NATO ally, argues that because of the ideological and organizational links between the groups, the U.S. support for the YPG is being transferred directly to the PKK to ultimately be used against the Turkish state and its people.

The situation has caused tensions between Washington and Ankara, with the former saying that support for the YPG is the only option to defeat Daesh and the latter saying that an alternative could be found through an alliance with local Arab tribes backed by countries in the region, rather than supporting and arming "a terrorist group."