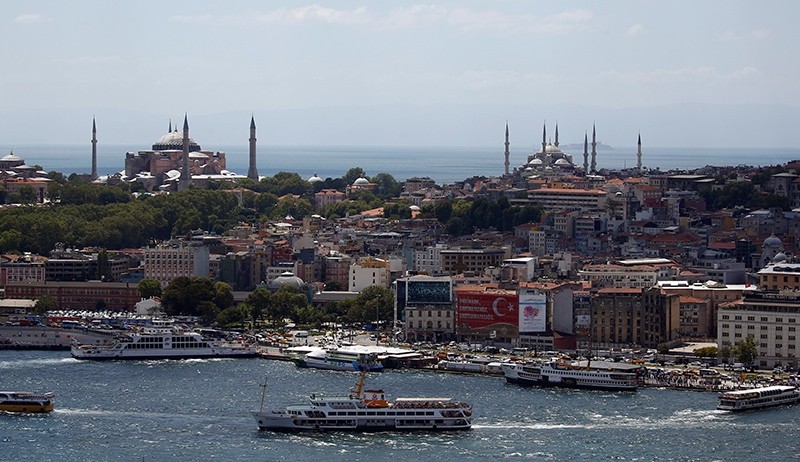 A recent survey conducted by the U.S.-based Pew Research Center has found that more than 70 percent of people in Turkey view American influence and power as major threat to their country.

The study, conducted in 38 countries by surveying 41,953 people from Feb. 16 to May 8, 2017, asked what the participants perceived as a threat to their country.

In the overall results, though those surveyed chose Daesh and climate change as the biggest threats, a significant increase in "the U.S. and its power and influence" as a threat was also discovered.

In Turkey, 72 percent of people said U.S. power and influence was a threat to their country.

According to the research, there has been a 28 percent increase since 2013, when just 44 percent named U.S. power and influence as a major threat. "People in Turkey are also worried about the refugee issue [ranking at 64 percent] which has spilled over their borders in recent years," the research co-authored by Jacob Poushter and Dorothy Manevich said.

In recent years, the perception of the U.S. in Turkey has mainly been affected by two issues: The U.S.' support of the Syrian Democratic Forces (SDF) in Syria, which is primarily dominated by the PKK terror organization's Syria affiliate the People's Democratic Union (PYD) and its armed wing the Peoples Protection Unit (YPG) in Syria. The PKK, recognized as a terror organization by the U.S., the EU and Turkey, has been in an armed conflict against Turkey for more than 30 years, during which nearly 40,000 people have lost their lives. Turkey believes that the military support to the YPG eventually gets into the hands of PKK terrorists and is then used against security forces and Turkish citizens, constituting a national security threat. As such, the U.S. support of the YPG, which began under former President Barack Obama and has continued through the Donald Trump administration, has angered the Turkish public.

The negative perception of American influence has also been perpetuated by the fact that the leader of the Gülenist Terror Group (FETÖ), Fetullah Gülen, the mastermind behind last year's failed July 15 coup attempt, resides in Pennsylvania, and despite numerous demands from Ankara for his extradition, no concrete steps have been taken by the American authorities.

July 15, 2016 marked the day Gülenist militants embedded in the ranks of the Turkish military attempted to stage a coup against the government and the Turkish state. As a result of the failed attempt, 250 people lost their lives and over 2,500 people were wounded.

A recent survey conducted by the British Broadcasting Company (BBC) also found the number of Turkish people with anti-American sentiments had increased by 28 percent in just three years. According to the poll, conducted with over 18,000 people from 19 countries in early July by GlobalScan and the Program for Public Consultation (PPC) for the British broadcaster, the ratio of Turks that view the United States negatively stood at 64 percent, compared to 36 percent in 2014.

İhsan Aktaş, the chairman of the polling company GENAR, recently told Daily Sabah that the misinformed policies of former President Obama and the current President Trump administration's policies on cooperation with the PKK affiliate are the reasons behind the anti-American sentiment in Turkey.

"Anti-Americanism is not a new thing. There was antipathy before FETÖ, but the percentage of the people who think that the U.S. is not Turkey's ally and friend was around 60 percent. After the July 15 coup attempt, this percentage rose to 90 percent," Adil Gür, president of the A&G research company, had previously said.

The Pew research has also shown an increase in opinion that the U.S. is a major threat across Europe and Canada.

"U.S. power and influence is seen as a major threat by a median of 31 percent across Europe. Spain, however, stood out with 59 percent being worried about the U.S. In the six European countries surveyed and Canada, worries about American power and influence are up since 2016," the Pew report said.

In Canada, the perceived threat of their southern neighbor to their national security was sitting at 38 percent. In 2013, only 23 percent of Canadian participants considered the U.S. as a threat.

"People around the globe identify ISIS [Daesh] and climate change as the leading threats to national security," Poushter and Manevich wrote, referring to Daesh.