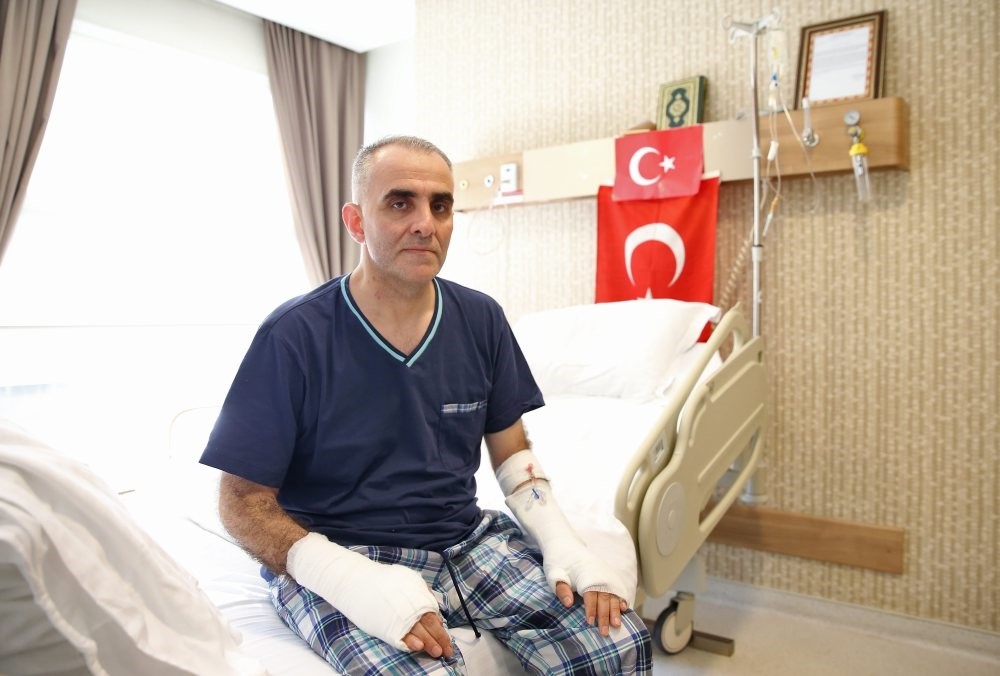 Col. Ala taken to the intensive care unit where he underwent treatment for 10 days, after wounded in coup attempt.
by Daily Sabah Aug 04, 2017 12:00 am

Colonel Davut Ala, who suffered seven bullet wounds from shots fired by putschist soldiers during the July 15 coup attempt, was promoted to the rank of brigadier general in Wednesday's Supreme Military Council (YAŞ).

According to an official statement, Col. Ala was ranked 21st position in the Land Forces Command promotion list and promoted to generalship along with 38 other colonels.

Col. Ala was the commander of the Kartaltepe military quarter in İstanbul's Eyüp district during the coup attempt perpetrated by officers loyal to the Gülenist Terror Group (FETÖ). On the night of the coup, Col. Ala was on his way to military lodges in Istanbul's Zeytinburnu district when he received a phone call from a non-commissioned officer who informed him that the coup attempt was underway. When he saw military tanks in the streets, Col. Ala quickly understood the military activity and made a phone call to Col. Sait Ertürk, the commander of the operation division of the 3rd Army Corps. The two discussed what measures could be taken against the coup soldiers.

After the phone call, Col. Ala and Col. Ertürk returned to Kartaltepe military quarters with their attendants and headed toward brigade headquarters, which had been captured by pro-coup officers. The two groups exchanged gunfire and the two colonels were wounded. Col. Ala was wounded by seven bullets to his chest, hand, ribs, liver and diaphragm.

Upon arriving at a local hospital, Col. Ala was initially presumed dead but was later taken to the intensive care unit (ICU), where he underwent treatment for 10 days. Col. Sait Ertürk succumbed to his wounds.

During the YAŞ meeting, commanders from the army, navy and air force were replaced with new generals.

In the meeting, the term of duty was extended one year for eight generals and two years for 168 colonels.

On July 15, a small military junta linked to FETÖ attempted to topple the democratically elected government in Turkey and impose martial law. The attempt was thwarted by military troops loyal to the government, along with police units and millions of Turkish citizens in favor of democracy.

A total of 249 people, most of them civilians, were killed by pro-coup soldiers, while over 2,000 people were injured.