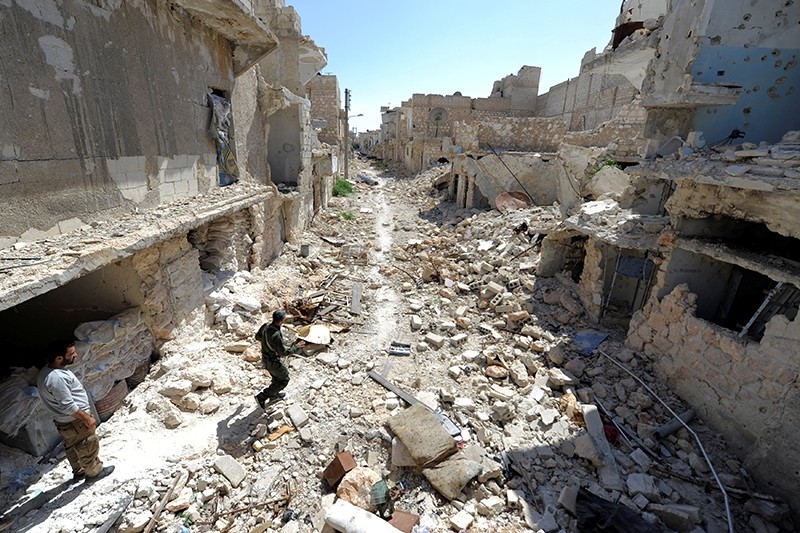 At least three civilians were killed and six others injured in an attack carried out by the PKK-affiliated Democratic Union Party (PYD) militants in Syria's northern Aleppo province on Saturday, a pro-opposition source has said.

Alaa Nima, a pro-opposition Syrian civil defense official, told Anadolu Agency (AA) that the fatalities occurred when the PKK/PYD terrorists attacked the opposition-held town of Marea. He said that a pregnant woman was among the dead and three children were among those injured in the attack.

"The PYD has been targeting Marea for a while now," Nima said, claiming that yesterday's attack targeted residential areas.

Meanwhile, Abdulfattah Hussein, a member of the Syria's Local Coordination Committee (LCC), said that the Syrian opposition has retaliated to the PKK/PYD attacks.

He added that a number of critically injured opposition fighters were transferred to Turkey for treatment. They were engaged in a fierce battle with the PKK/PYD in the western parts of Marea. The PKK/PYD has used Tal Rifaat as a launching point for attacks against the opposition-held areas of Marea and Azaz in Aleppo.

However, this is not the first time the terrorist organization has attacked civilians in Syria. Last month, four civilians were killed and 20 others were injured in an overnight attack by the PYD in Marea. Earlier in June, a video showing PKK/PYD terrorists torturing civilians in northeastern Syria's Raqqa was obtained by AA. The footage showed images of two terrorists beating up some tied-up civilians in Mansura, western Raqqa.

It was also reported that U.S. forces recently intervened as the PYD militants plundered civilian homes in Raqqa. A confrontation occurred between locals and some members of the terror group due to their unlawful practices.

The Turkish government considers the PYD to be the Syrian offshoot of the PKK, a designated terrorist organization by Turkey, the U.S., and the EU.

The PKK resumed its armed campaign against the Turkish state in July 2015. Since then, it has been responsible for the deaths of some 1,200 security forces and civilians, including women and children.