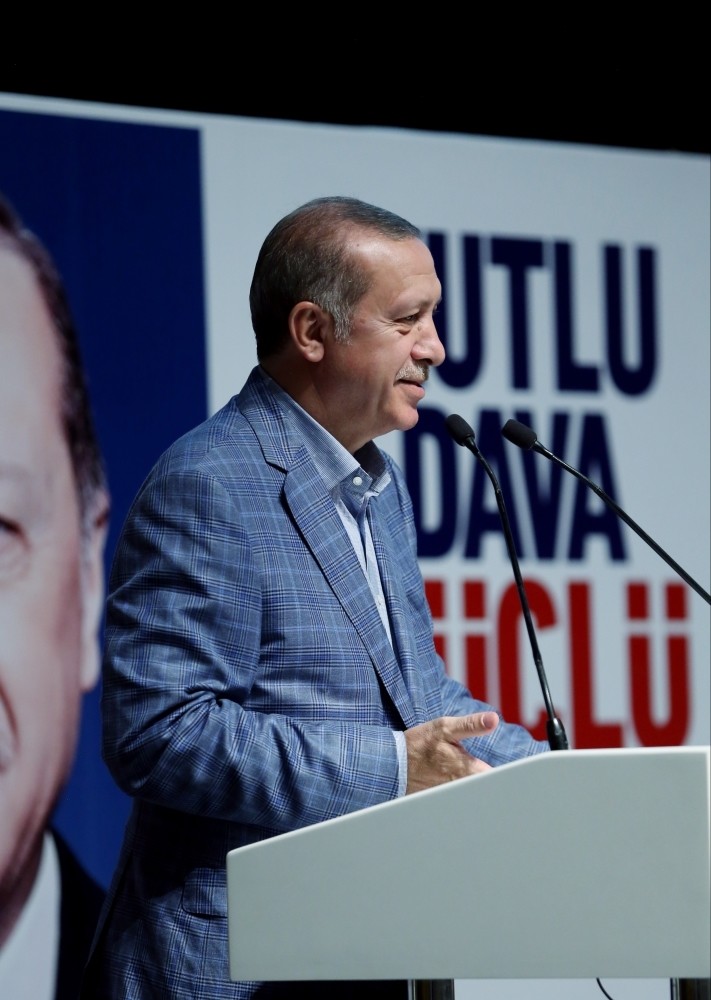 President Erdou011fan said in a provincial advisory council meeting that the party's real challenge will be the 2019 elections.
by Eda Işık
Aug 08, 2017 12:00 am

The ruling Justice and Development Party formed a committee to better explain the new executive presidential system by analyzing the results of the April 16 referendum, which is seen as unsatisfactory by President Erdoğan and party officials

The Justice and Development Party (AK Party) will better explain the new executive presidential system in the run-up to the 2019 elections as the party's Political Analysis Committee has completed its analysis of the outcome of the April 16 referendum.

According to the analysis, the main motivation of the people who voted for the referendum is the faith they have in President Recep Tayyip Erdoğan while the reason for the close gap between yes and no votes was identified to be a result of not providing citizens with proper information about the system change.

After the April 16 referendum, a commission of 11 AK Party members got to work to understand why support for the referendum was relatively low, at 51 percent. The commission finalized the analysis after conducting works in the seven regions and 81 provinces of the country. A more detailed report has been prepared on metropolitans such as Istanbul, Ankara and İzmir where opposition to the referendum prevailed.

The study also focused on what motives yes voters had heading to the ballot box. The reasons included people's belief that the AK Party maintains stability, makes reforms, continues economic welfare, diminishes deficiencies in the current system and minimizes instabilities especially during when the country was governed by coalitions. It found that citizens' expectations that economic turbulences will not repeat and that the government effectively fights terrorism played an important role in their choice.

In the analysis, people's lack of information on the content of the constitutional changes is believed to be the main reason for the high opposition to the referendum.

Meanwhile, the executive presidential system that approved in the referendum will go into effect after the presidential and parliamentary elections in 2019. The AK Party plans to hold an effective campaign until then to better explain the new system.

The constitutional changes will bring what Erdoğan calls a "Turkish-style" presidential system. The new system has been promised to eliminate political deadlocks stemming from the parliamentary system and speed up the implementation of executive decisions.

In the run-up to the April 16 referendum, some local administrators and AK Party officials were subjected to criticism for their lack of enthusiasm and dynamism. Young politicians are reportedly expected to be more visible in local party administrations, while rejuvenation in the whole party organization is expected to bring new dynamism to the AK Party. Addressing AK Party provincial heads last month, Erdoğan said he is willing to change some figures in rural AK Party branches, which he said have shown signs of tiredness and are "unraveling," with others who are more passionate and enthusiastic about the new system.

"Our friends in successful branches will, of course, continue their duties, but I guess you will also agree that a comprehensive change is needed in our local administrations," Erdoğan said concerning shake ups in the party.

President Recep Tayyip Erdoğan said in a provincial advisory council meeting that the party's "real challenge" will be the 2019 elections. "We have seen how hard it is to have more than 50 percent of the votes at the referendum and the election before. This result shows that as the AK Party [Justice and Development Party], we have to work harder for the 2019 elections," he said.

He said he observed the symptoms of exhaustion at the party's organizations before and gave the signals of a change in party organizations. "By considering the great congress process as an opportunity, we have to make a dramatic change in our organizations. As the head of the party, I'm determined on this issue. We have started from the county elections and now the next steps are the town and city elections. It doesn't matter who will sit in those chairs. What does matter is the relationship of those names with the public," he said.