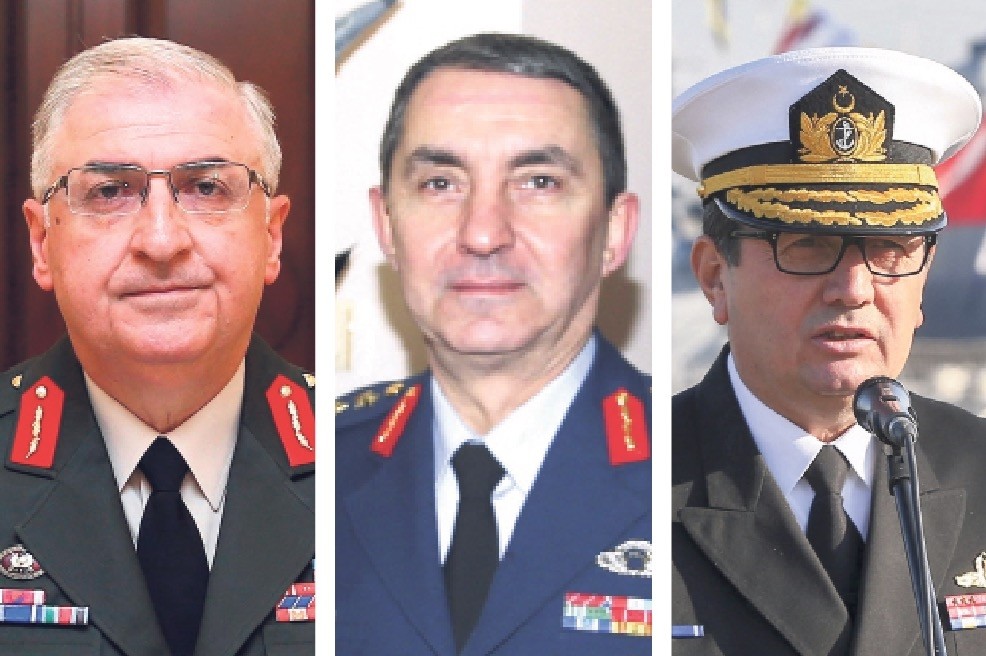 The high-ranking appointments made in the Supreme Military Council (YAŞ) regarding the command of the land, naval and air forces earlier this month are set to come into action on Aug. 22-23 , Anadolu Agency reported yesterday.

The first of the handover ceremonies is expected to take place at the headquarters of Naval Forces Command. Admiral Adnan Özbal, newly-appointed Commander of the Turkish Naval Forces, will take over from Admiral Bülent Bostanoğlu with the ceremony scheduled for Aug. 22.

It is foreseen that the handover of the Air Force Command will also take place on the same day. In the ceremony at the headquarters of the Air Forces Command, Gen. Abidin Ünal, who is stated to retire, will be replaced with Gen. Hasan Küçükakyüz.

Gen. Yaşar Güler, who was appointed Commander of the Land Forces in the YAŞ meeting, will assume his new position with the ceremony planned for Wednesday, Aug. 23. Gen. Salih Zeki Çolak will leave his post to Gen. Güler at a ceremony at the headquarters of the Land Forces Command.

During the YAŞ meeting, along with replacements in the command of the Army, Navy and Air Force, six generals and admirals were promoted to higher ranks, with a total of 61 colonels promoted to the rank of general.

Eight Navy colonels who were acquitted in the notorious Balyoz (Sledgehammer) and military espionage cases, which are regarded as Gülenist Terror Group (FETÖ) schemes perpetrated to replace them with officers loyal to the terrorist group, were promoted to the rank of brigadier general in Wednesday's Supreme Military Council (YAŞ) meeting.

New Commander of Naval Forces Admiral Özbal had been promoted to vice-admiralty on Aug. 30, 2015.

Previously, he served as commander of the Staff, Plan and Administration Department of the Naval Forces and commander of coastal guard.

Gen. Hasan Küçükakyüz, who was brought to the Air Force Command at YAŞ, was serving as the commander of Combatant Air Forces and commander of Air Missile Defense since July 30, 2016.

Küçükakyüz was also arrested by the putshcist officers at the wedding of the daughter of Lt. Gen. Mehmet Şanver at Istanbul's Moda Sea Club on July 15, 2016, at the time the coup attempt masterminded by FETÖ was underway.