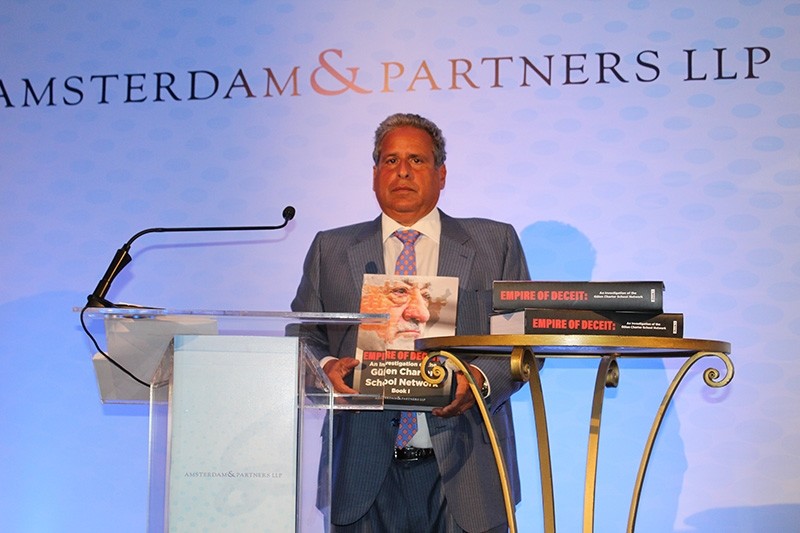 A leading international lawyer investigating unlawful activities of the Gülenist Terror Group (FETÖ) in the U.S. has documented over $243 million worth of fraud by the group, through its charter schools operating in America and will be presented in a book that will soon be released.

Robert Amsterdam, an international lawyer who provides assistance to Turkey regarding the investigation on FETÖ, said once again that the organization threatens Turkey, the U.S. and democracy in general.

He outlined the operation of FETÖ charter schools in the U.S. ahead of the release of his book Empire of Deceit: An Investigation of the Gülen Charter School Network.

Amsterdam noted that FETÖ has siphoned off around $243 million through its charter schools, by misusing taxpayers' funds.

"The book is not about who or what the Gülen organization is in Turkey," the lawyer, whose London- and Washington-based firm, Amsterdam & Partners, has worked major cases across the world, told journalists.

"It is not about what they are doing in Africa. We are talking about a massive corporate raid on the [U.S.] taxpayers with respect to an organization that is engaged in systemic violations of the U.S. law."

FETÖ, led by Pennsylvania-based Fetullah Gülen, is accused of orchestrating a deadly coup attempt in Turkey and to be behind a long-standing plot to overthrow the Turkish government by infiltrating state agencies, particularly the military, police and judiciary.

In the U.S., FETÖ operates a network of around 140 charter schools across dozens of states.

According to U.S. broadcaster CBS, the schools are being investigated by the FBI over the alleged skimming of taxpayers' money to fund the group.

Amsterdam's law firm has been retained by the Turkish government since at least December 2015 to investigate FETÖ's global operations, which include hundreds of educational institutes and businesses.

"I want to make something else very clear," Amsterdam said. "This is not a political activity. Our work with respect to the Gülen organization has been as lawyers and investigators to determine exactly what behavior the Güulen organization has engaged in."

The book is of significant importance to Americans, he added, because it also reveals the systematic abuse of the children with developmental handicaps, the use of unqualified teachers and the recruiting of American students into FETÖ.

Amsterdam said his firm had uncovered attempts by FETÖ to establish ties with the U.S. military. Some charter schools are located around U.S. military bases, he added.

The book also demonstrated that the schools are connected to a web of management, real estate and supply companies in a "closed loop system."

Empire of Deceit: An Investigation of the Gülen Charter School Network is due to be published on Sept. 13.