KRG plunges into uncertainty as Iraqi Kurds vote for independence 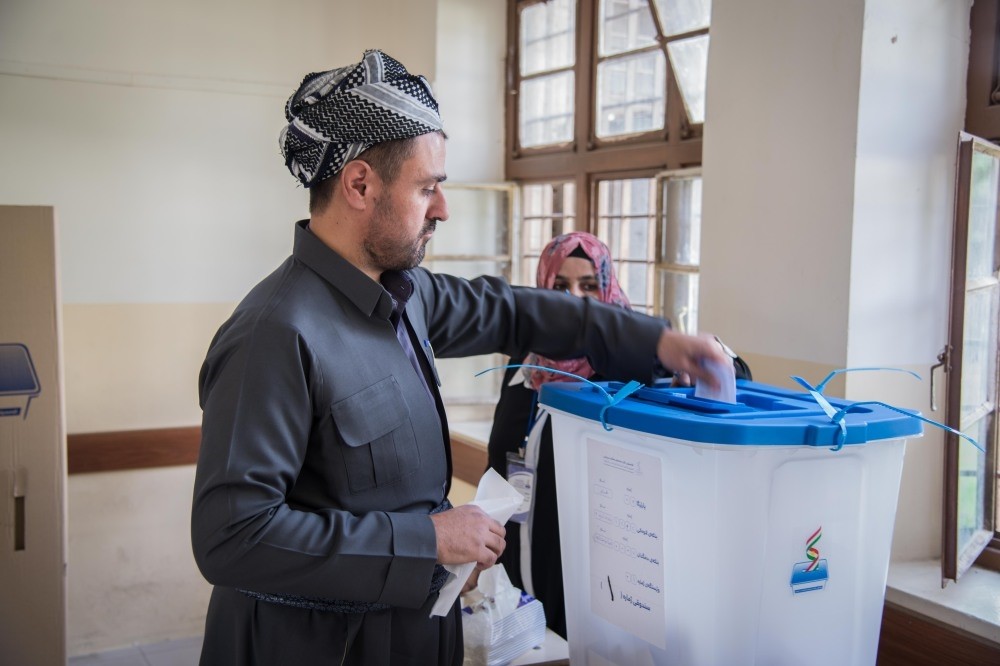 Five million KRG citizens were registered to vote Monday in the referendum that will determine the fate of the autonomous region
by Yunus Paksoy Sep 26, 2017 12:00 am

The independence referendum is leading the KRG toward uncertainty as its neighbors, Turkey and Iran, increase pressure on the country

Firas Omar set the alarm on his smart phone for 7 a.m. The historic day had arrived, and Omar could not wait to get in line early at an elementary school in Irbil, the capital city of the Kurdistan Regional Government (KRG), to cast his vote for independence in a referendum that was almost certain to result in overwhelming support for separation from Iraq.

The 37-year-old Iraqi Kurd's decision seemed predestined as he came out of the voting booth, threw the envelope into the ballot box and held his finger high as a sign of victory. "I have been waiting for this for a long time," Omar said.

Some 5 million KRG citizens were registered to vote yesterday on the fate of the autonomous region in a referendum that has drawn worldwide criticism and immense pressure from regional actors. In spite of the exuberance taking Irbil by storm, the KRG is headed towards uncertainty, as neighboring Turkey and Iran up the pressure on the Iraqi Kurds.

Omar's vivid enthusiasm for an independent Kurdish state turned into pessimism for the near future when asked about possible economic and political sanctions that might be imposed by regional powers. "Such economic actions would hurt our economy. We would not favor that," he said.

Ankara upped its game against Irbil yesterday as President Recep Tayyip Erdoğan and Prime Minister Binali Yıldırım spoke out against the independence more staunchly than ever. Furthermore, the Foreign Ministry issued a harsh written statement, stressing that Ankara "does not recognize the referendum," and it will be considered "null and void." Also, it advised all Turkish citizens against traveling to the autonomous region.

While Turkish animosity toward the referendum lingers and economic sanctions remain on the table, KRG Prime Minister Nechirvan Barzani softened the tone in a press conference yesterday, thanking Ankara for all it has done for the autonomous region at its toughest times. "It is our hope that Turkey can assess the situation in a calm manner," Prime Minister Barzani said, expressing Irbil's wish to exert diplomatic channels in the post-referendum era.

Iraqi Kurdish businessmen are about to push the panic button. Baran and Sirwan are businessmen in Irbil earning their living through business with Turkey. Despite having voted for independence, the two expressed their perplexity over Ankara's possible maneuver to block all border crossings. "Shutting down the borders would wreak havoc on us," Baran said.

Sirwan's jitters are not any smaller. The Iraqi Kurd hopes for a quick thaw in Ankara-Irbil ties. "It would be unimaginable otherwise," he sighed. Up until yesterday, most Iraqi Kurds were on pins and needles in regards to whether the referendum would be held or not. Overwhelming international pressure from entities like Turkey, Iran, the United States, the United Kingdom, the United Nations and many others nearly pushed KRG President Barzani to postpone the vote. "Will President Barzani postpone the referendum?," was the million dollar question everyone had in mind until his packed press conference late Sunday.

"There is nothing they can offer to bring us back to the failed partnership," Barzani asserted, putting an end to all discussions and rumors about the fate of the independence vote. Shortly prior to the KRG president's historic speech, Iran shut its airspace to planes both from and to the autonomous region in a move that is interpreted to be the first of the economic sanctions.

Baghdad went on the offensive Sunday as well after its repeated warnings to the KRG fell on deaf ears. The Iraqi government urged the KRG to hand over control of all border posts and airports. Iraqi Prime Minister Haider al-Abadi's office also advised the international community to get in contact with the Baghdad government for oil trade, and regarding borders and international airports.

Irrespective of the outcome of the referendum, the autonomous Kurds will have to sweat blood and tears in the upcoming years to obtain independence. Having to sit down at the table with the central government to find consensus on the divorce files, the KRG already has its hands full.

Even before the independence negotiations, Irbil may quickly have to work a way out of a possible economic slump if the Turkish government makes a move to prevent the autonomous region from carrying its oil through Turkish soil, which would more or less mean snapping the KRG's lifeline. Moreover, Ankara and Tehran have recently demonstrated that they will not hesitate to use force as the Turkish military conducted a drill along the Iraqi border last week, and the Iranian army did the same over the weekend. The Turkish military drill, some couple hundred kilometers away from the capital of the KRG, irked many. The question of whether the Turkish Armed Forces (TSK) would really march into northern Iraq hovers around from one conversation to another in central Irbil.

The extraordinary session in the Turkish Parliament on Saturday to extend the military mandate for cross border operations in Syria and Iraq exacerbated the already tense atmosphere in the region. It seems Iraqi Kurds will remain exposed to the negative repercussions of the independence ambition with Ankara, Tehran and Baghdad excessively mounting pressure on Irbil to isolate it in the international arena.