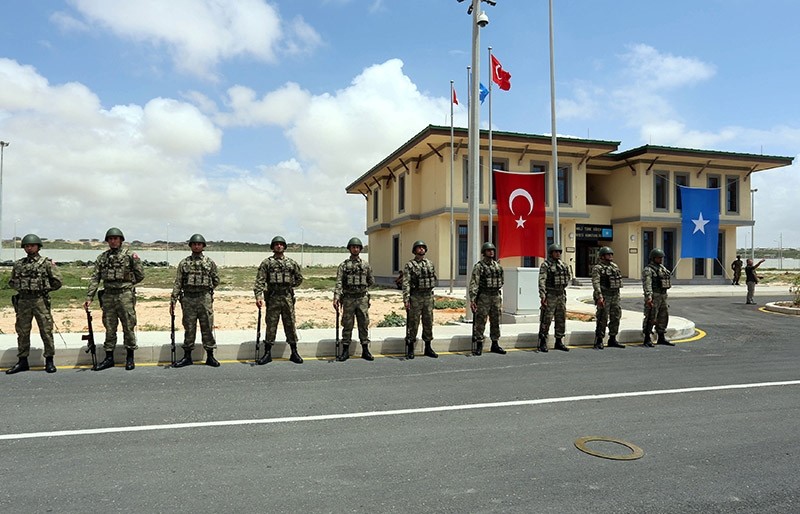 Turkish military officers parade during the opening ceremony of a Turkish military base in Mogadishu, Somalia September 30, 2017. (Reuters Photo)
by Daily Sabah with Agencies Sep 30, 2017 12:00 am

Turkey has opened its biggest overseas military training base in the Somali capital of Mogadishu on Saturday, cementing its ties with the volatile but strategic Muslim nation and building a presence in east Africa.

The academy was inaugurated by Turkey's Chief of General Staff Gen. Hulusi Akar and Somali Prime Minister Hassan Ali Khaire in a ceremony held at the training facility. More than 10,000 Somali soldiers will be trained by Turkish officers at the base, a senior Turkish official said ahead of a ceremony in Mogadishu attended by Turkish military Chief of Staff Gen. Akar.

There are about 200 Turkish officers at the base, which includes army dormitories, training grounds and prisons.

"My government and the Somali people will not forget this huge help by our Turkish brothers. This academy will help us train more troops," Khaire said at the inauguration ceremony.

The opening of the $50-million base signals ever-closer ties between Turkey and Somalia. Turkey's relations with the Horn of Africa date back to the Ottoman Empire, and the Turkish government has become a close ally of the Somali government in recent years.Khaire also said it would help the government "reconstruct" its national force - "not based on clan ...not from a particular place, but well-trained forces that represent the Somali people."

For his part, Gen. Akar said the Turkish government would "continue to support our Somali brothers until their country becomes militarily stronger."

Located south of Mogadishu, the training facility had been under construction for the last two years.

The facility is spread over 4 square kilometers (1.54 square miles) and has the capacity to train more than 1,500 troops at a time, according to the Somali government.

It has built schools, hospitals and infrastructure and provided scholarships for Somalis to study in Turkey. President Erdoğan has visited Mogadishu twice and when he made his first trip there in 2011 he became the first non-African leader to visit the war-ravaged nation in 20 years.

Rapidly growing trade between the two nations has followed. In 2010, Turkish exports to Somalia totaled just $5.1 million. By last year, this figure ballooned to $123 million. In the space of six years Turkey has gone from Somalia's 20th-largest source of imports to its fifth-largest.

Somalia's government has a number of foreign backers, including the U.N., the African Union and the U.S., who are assisting it in building a functional national army capable of taking on the fight against the militant al-Shabaab group.

The militants were driven out of Mogadishu in 2010, but their deadly attacks remain one of the main obstacles to stability in the chaotic Horn of Africa country, which lies along one of the world's busiest shipping routes.

The Somali government has praised the investments made by Turkey for improving infrastructure in the country and the information minister singled out Turkey's new move in the area of security support.

"We are very happy they are giving us modern facilities for our security forces," he said."This is something that Somalia has never seen even though countries like the U.S. and the U.K. are giving us millions. The difference is the camp Turkey built is an institution that will remain for the next 50 or 100 years."