Baghdad’s offensive forces KRG to withdraw from most occupied areas 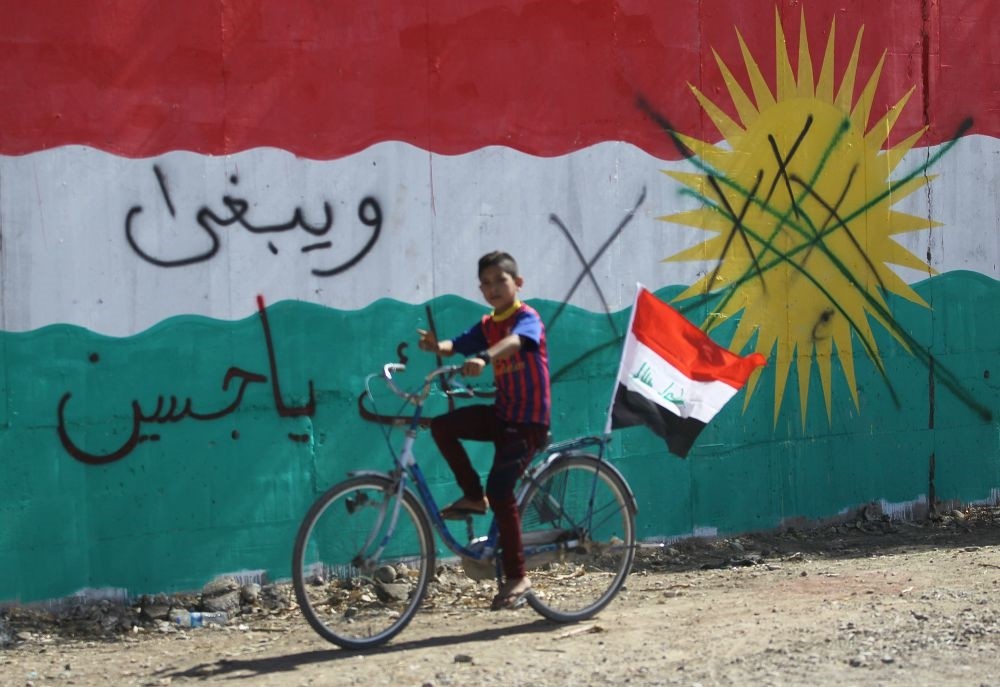 As a result of Sunday's military launch, Iraqi troops have gained control over the disputed city of Kirkuk, including its oil refinery, and forced KRG peshmerga forces to retreat three weeks after the KRG referendum

The Kurdistan Regional Government (KRG) has lost the majority of territories outside of the officially recognized autonomous region including Kirkuk, Sinjar, Makhmour and Qanaqin, after the Iraqi army and pro-Baghdad militia launched an offensive late Sunday to take over control following the dispute that emerged from the KRG's independence referendum last month. In addition, the U.S. and Germany have also abstained from taking steps in favor of KRG President Masoud Barzani who is now embroiled in a row with Baghdad. All oil fields and facilities in Kirkuk province are now under the full control of Iraq's Oil Ministry, a ministry spokesman said Tuesday.

"The ministry now also holds oil wells and facilities in Kirkuk," Asim Cihad told Anadolu Agency (AA). On Monday, Iraqi forces captured Kirkuk, three weeks after the KRG held a referendum on secession of northern Iraq's Kurdish region. The oil-rich province of Kirkuk is cited to be among the territories disputed between the Iraqi central government and the KRG, which is defined in Article 140 of the Iraqi Constitution, adopted after the U.S. invasion of Iraq and the toppling of Saddam Hussein.

Accordingly, the administrative statuses of these areas were to be determined with referendums by 2007, but the referendums have yet to be held, due to political turmoil in the country.

According to reports on several media outlets, a nine-article, secret deal between the Iran-backed Hashd al-Shaabi and the Patriotic Union of Kurdistan (PUK) has been inked.

The deal was signed between Bafil Talanani, the son of late general secretary Jalal Talabani, who died recently, and al-Shaabi representative Hadi Amiri.

The nine-article deal stipulates the following: Iraqi forces would be positioned in disputed areas and peshmerga forces would withdraw; the control of 17 town and districts, including Kirkuk, would be transferred to the Iraqi central government; a shared administration would govern Kirkuk, where 15 Kurdish neighborhoods would be governed by the Kurds, and 25 other neighborhoods would be governed by other mixed administrations. Finally, strategic posts including the K1 military base, the airport and oil refineries, would be controlled by the Iraqi central government.

In addition, the deal also says that the Sulaymaniyah airport would resume operations and the salaries of the peshmerga and civil servants will be paid by the central government, while a new administration will also be established to govern the new territories.

The PUK and the Barzani-led Kurdistan Democratic Party (KDP), despite having reconciled after the U.S.-led invasion of Iraq, have been embroiled in historic rivalry, as the PUK is known for its close ties with the Iranian region. As such, the deal, if realized, is expected to create new tensions between the KDP and the PUK.

A joint force composed of the Iraqi army, the federal police and allied fighters of the Hashd al-Shaabi militia entered the center of the city in the early morning hours, Qasim Shesho told AA.

According to reports, peshmerga troops had pulled out of all government buildings in Sinjar without confrontation.

The KRG's referendum, which aimed to establish an independent state in northern Iraq, was met with strong opposition from the majority of regional and international actors, including the U.S., Turkey and Iran, who warned that the poll would distract from Iraq's fight against terrorism and further destabilize the region.

Kurdish officer Sirwan Khalil, for his part, said "peshmerga forces had pulled out from the village of Kanhash located in the historic city Nimrud, southeast of Mosul."

Government forces seized control of the districts of Khanaqin, Jalawla and Kalar following a Kurdish troop pullout, Police Capt. Habib al-Shammari told AA. The region is home to a large Kurdish community and the site of a small oil field, Khana.

Upon instructions from Irbil, peshmerga forces also pulled out from the towns of Qaraj and Bashiqa in the northern city of Mosul.

NRT TV, which broadcasts from the northern city of Sulaymaniyah, also quoted officials at the crossing as confirming the news.

Although the U.S. has been a strong supporter of the KRG, U.S. President Donald Trump said on Monday that Washington will not take sides in the conflict between Baghdad and Irbil.

"We don't like the fact that they're clashing. We're not taking sides," Trump told reporters at the White House.

"We've had for many years a very good relationship with the Kurds, as you know, and we've also been on the side of Iraq, even though we should have never been there in the first place. We should never have been there. But we're not taking sides in that battle," Trump underlined, expressing his criticism of the U.S. invasion of Iraq in 2003.

Germany has also taken a step against the KRG following the eruption of the Baghdad-Irbil conflict last week.

Berlin has suspended the training of Kurdish peshmerga forces in northern Iraq amid concerns about the growing tensions in Kirkuk, officials confirmed Monday.

"Military training activities have been temporarily suspended," a German Defense Ministry spokeswoman told AA, adding that officials are closely monitoring developments in tight coordination with allies in the anti-Daesh coalition.

Germany had been providing military training to Kurdish peshmerga forces since 2015, supporting the fight against Daesh in the region. As part of the training mission, the German Armed Forces (Bundeswehr), stationed approximately 150 soldiers in Irbil, the KRG capital.