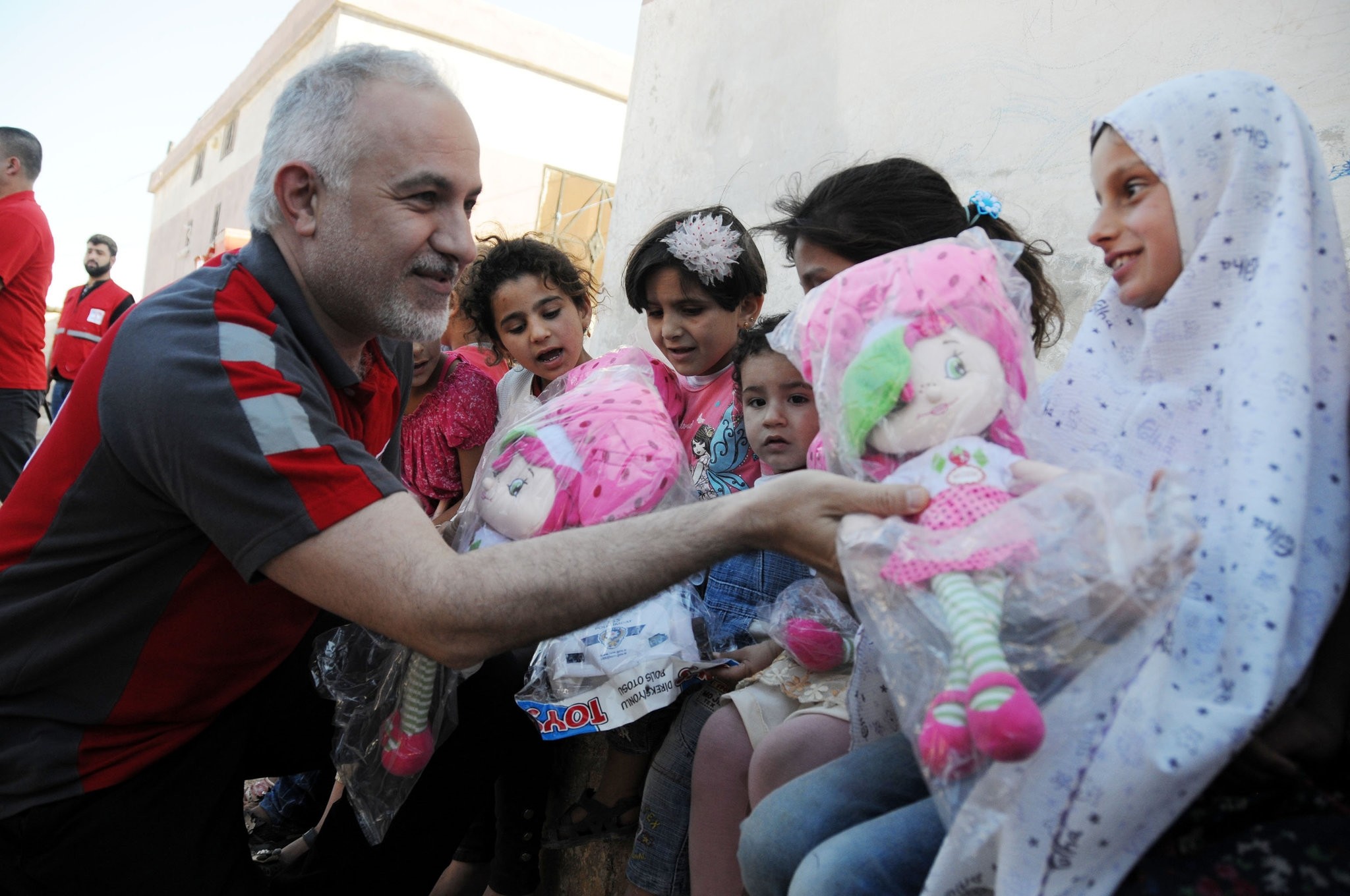 Dr. Ku0131nu0131k gives toy kits to orphaned children in Idlib who lost their parents during the Syrian Civil War, as part of Turkish Red Crescentu2019s humanitarian aid program for the region.
by Daily Sabah Oct 19, 2017 12:00 am

Announcing its candidacy for the next term of the European Chair of the IFRC, the Turkish Red Crescent is preparing to host the general assembly of the federation in Antalya next month, while at the same time to continuously provide humanitarian aid around the world

Turkey is a candidate for the position of Eurozone Regional Chair for the International Federation of Red Cross and Red Crescent Societies (IFRC), the head of the Turkish Red Crescent announced yesterday.

Speaking at a press conference in Istanbul about the IFRC General Assembly held every four months, Dr. Kerem Kınık said that the IFRC will hold its assembly in the city of Antalya on Turkey's Mediterranean coast next month in order to determine the federation's new administrative board and select the heads of the five regional zones, including one global federation head.

Turkey has put itself forward for the chair of the European region, which consists of 53 countries. Turkey has been a member of the IFRC administrative board since 2005.

In addition to determining the members of the administrative board, the assembly will also evaluate the past four years while planning for the future.

"The Turkish Red Crescent will celebrate its 150th anniversary in 2018. So we are very glad that these two big events coincided with each other like that. We will be hosting nearly 1,500 people from 190 countries around the world. We aim to address one main issue: How can we ease the suffering of people? How can we protect humanitarian honor? Also, how can we further help those in need?" Kınık said, referring to those who work under the umbrella of the IFRC as the "good hands."

Citing that the level of human suffering has peaked since World War II, Kınık pointed to the imbalances and injustices in the world, saying that while some people are struggling with famine, others are faced with obesity, a disease caused by overeating.

"We will build 24,000 prefabricated shelters in Bangladesh for the Muslim Rohingya together with the Red Cross of Myanmar while also establishing humanitarian aid storage facilities and providing logistic vehicles for the transportation of aid to the region," Kınık said, speaking on the Rohingya crisis and indicating that the program has also been recognized by Myanmar's government and other regional powers.

Highlighting that in last two years they have sent two ships to Somalia filled with 15,000 tons of humanitarian aid, Kınık also touched on the Red Crescent's relationship with European institutions.

"Idlib has its own local refugees from Aleppo, Homs, Damascus and various other cities in Syria. In Idlib, there are today nearly 400 refugee camps, and they are not in very good condition. Approximately 800,000 people live in these camps," Kınık said regarding the Red Crescent's operations in Idlib. Founded in 1919, the IFRC is a federation that oversees the world's Red Crescent and Red Cross societies, and is the biggest humanitarian aid organization in the world with 190 member states. The Turkish Red Cross was founded in 1868 as the first Red Crescent society. It conducts activities around the world.