US ups pressure on media as State Dept. spox fails to answer question on PKK, tries to defame Daily Sabah 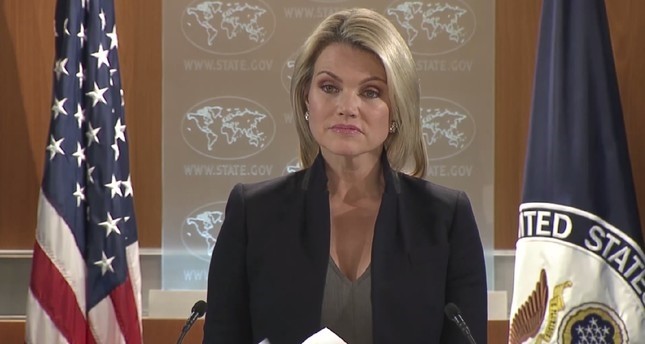 The accusation was made seemingly in a bid to deflect Soylu's question regarding a recent video by the PKK-affiliated Democratic Union Party's (PYD) armed wing the People's Protection Units (YPG) that shows YPG terrorists praising Abdullah Öcalan, the convicted leader of the PKK.

The video was released in response to the recent U.S. criticism of the group after it hung banners with Öcalan's pictures in Raqqa, Syria.

Before making the allegation against Daily Sabah and its correspondent, Nauert said she was not aware of any such video and resorted to urging "all parties to avoid actions that would be seen as offensive or create any additional tensions," in an attempt not to confirm the YPG's undeniable ties to the PKK, a U.S.-designated terrorist group.

"I asked a question about the YPG propaganda video on Öcalan, in reply Ms. Nauert told me that I was working for a 'government-private partnership publication.' When I said that my publication was private, she implied that it was receiving government funding. Relevance? None," he said on his Twitter account.

The Media Association was quick to condemn the incident in a statement. Ibrahim Altay, the secretary-general of the association, said Nauert's attitude was a major breach of freedom of speech.

"Allegations by the State Department spokesperson directed toward Ragıp Soylu, a respected journalist, and his newspaper Daily Sabah, is totally against freedom of thought and expression," Altay said in a statement on behalf of the association.

"Ms. Nauert, whose salary is funded by taxpayers, is paid to provide satisfactory answers to journalists. It is deeply unacceptable that she took the question personally, manipulated and scapegoated a journalist," he said.

"The spokesperson has tried to prevent society from being informed. From now on, Ms. Nauert's statements on press freedom will be taken with a grain of salt. We strongly condemn her and her inappropriate attitude," he commented, adding that the association was "concerned about the future of American democracy, no less than the working conditions of journalists there."