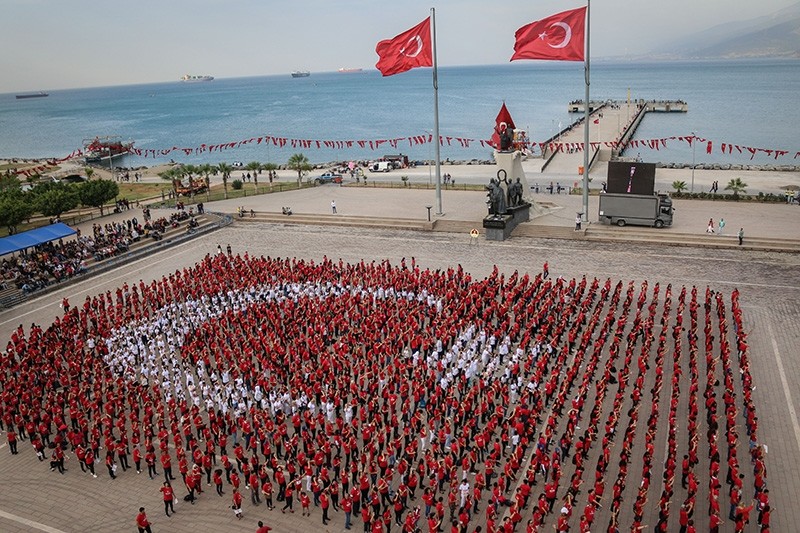 President Recep Tayyip Erdoğan celebrated Saturday the Republic Day and the 94th anniversary of the Proclamation of the Republic of Turkey.

The president said regarding the Turkish War of Liberation, "the fight against those rushing into Anatolia to loot the inheritance of the Ottoman Empire, whom they named "sick man", as the enemy was devastated by the courage and determination of the nation and "the enemies went back as they came," quoting Mustafa Kemal Atatürk, founder of the Republic of Turkey.

He also called Turkey a "gate of hope" for the oppressed people and victims in the world.

"This is the main reason why we are the targets of the bloody terrorist organizations," Erdoğan said in his message commemorating Oct. 29 Republic Day of Turkey.

"We will not allow the swarms of killers as Daesh, PKK, PYD/YPG and the Gülenist Terror Group (FETÖ) to keep us from our targets," he said.

Prime Minister Binali Yıldırım also congratulated the Turkish citizens on the Republic Day in a statement.

"No terrorist action, coup attempt or media attack which targets our unity, togetherness, homeland, independence, and future will reach its target. Our nation's spirit of unity will demolish all mischief makers' traps," Yıldırım stressed.

Main opposition Republican People's Party (CHP) chairman Kemal Kılıçdaroğlu also celebrated the Republic Day on Saturday, underlining the importance of the rule of law and sovereignty. Stressing that Turkey was founded based on rights, law, and justice, Kılıçdaroğlu wished everyone permanent peace and democracy.

Meanwhile, opposition Nationalist Movement Party (MHP) chairman Devlet Bahçeli said in a message commemorating the day that Turkey would remain meaningful and immortal thanks to the national will. Bahçeli reiterated that Turkey would never give ground to new attempts of occupation, terror attacks and conspiracies.