AK Party ready to kick off provincial congresses this week 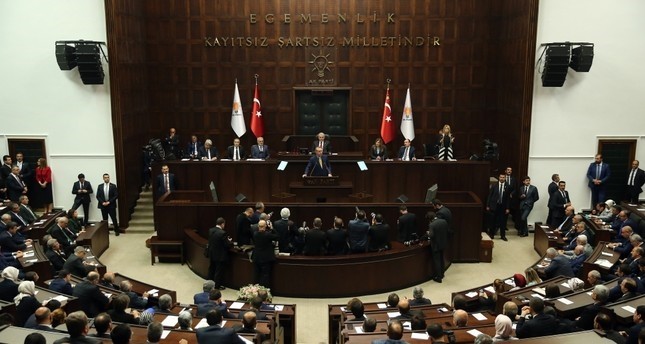 President Recep Tayyip Erdou011fan addresses members of the AK Party for the first time as the party head after the constitutional April referendum
by daily sabah
Nov 13, 2017 12:00 am

The party will hold 51 provincial congresses as part of the first phase of the schedule. The congresses in metropolitan cities will be held later on. The schedule is expected to be finalized by the end of February. In the end, the AK Party's Central Executive Committee and Central Decision Board (MKYK) will gather to determine a date for the sixth ordinary congress.

The AK party is in the midst of a change process begun when Erdoğan was re-elected party chairman in the spring. The party held an emergency congress after constitutional changes were approved in the April 16 referendum that allowed Erdoğan to re-establish his ties with the AK Party. What Erdoğan calls "metal fatigue" has been his top priority since then, as he called on some of his fellow party members and mayors to step down who seemed to be experiencing political weariness.

So far, rural and district congresses have helped the AK Party bring fresh, new figures into local branches and administrations. The AK Party deputy chairman in charge of organizations, Mustafa Ataş, previously said the party organizations at the provincial, district and local levels are the backbone of the AK Party and should be reshuffled accordingly to provide maximum effectiveness in assisting Erdoğan.