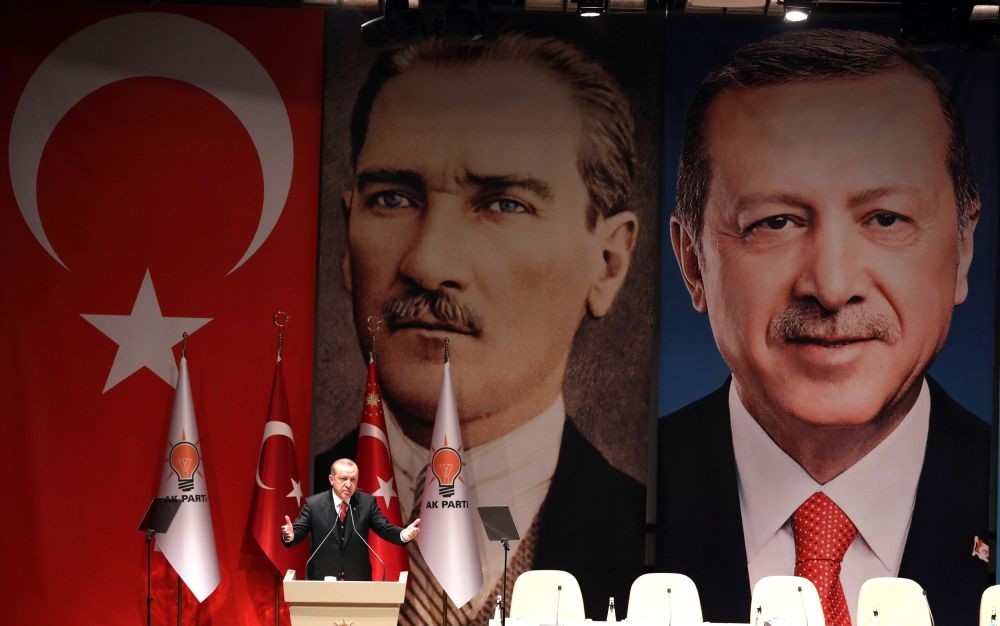 President Erdoğan issued a warning against outside powers that use non-state actors to split up countries and incite regional instability, which experts have interpreted as veiled criticism of U.S. support for the terrorist PKK's Syrian affiliate YPG

Turkey is well aware of the designs of outside powers on regional countries, President Recep Tayyip Erdoğan said on Friday during his address to the provincial chairmen of the ruling Justice and Development Party (AK Party), adding that the government intended to do everything necessary to stop the use of non-state actors to destabilize the region. Experts saw the remarks as a clear censure of continued U.S. support for the YPG, the Syrian affiliate of the PKK that it recognizes as a terrorist group. Erdoğan said Turkey "is disappointed with the U.S. for not keeping its promises since the crisis in Syria broke out," adding that he "doesn't want the same thing to take place in Afrin."

"We need to be dominant at the observation points in Idlib. If not, different terrorist groups will try to invade those areas," the president said.

The Turkish Armed Forces (TSK) is planning to set up 12 observation and security points in Idlib as part of the Astana peace process while preparing to extend its operation towards PYD-held Afrin and Manbij.

As part of the current plan, Turkish troops will be deployed at strategic points in Idlib, near its border with Afrin and Manbij, to monitor the region and prevent clashes between Syrian opposition fighters and the Assad regime forces as well as outline a plan for an upcoming operation in the other two areas.

Pointing out that Turkey had urged the U.S. to clear Manbij of PKK/YPG presence, Erdoğan said: "Obama did not keep his promises, though he promised many times. The current administration, unfortunately, said they were working with the SDF, not the YPG."

"Don't try to trick us by saying that the SDF is a democratic establishment. It is [also] a terrorist organization. We know who's who," he added.

The Syrian Democratic Forces (SDF) is largely dominated by the PKK-affiliated YPG.

Meanwhile, a deal was struck between Daesh and the SDF recently to allow hundreds of Daesh terrorists escape their former so-called capital Raqqa.

Evaluating the situation, Abdullah Ağar, a former military officer, and security expert, said: "It became clear how accurate Turkey's evaluation was. Reports have surfaced that the two organizations that appear to be fighting each other have cooperated and agreed to their own interests. This proves that they are nothing more than puppets,"

"Both organizations are being operated directly and asymmetrically. We saw this in Tabqa and recently in Raqqa. We also saw it in the areas that came under the Operation Euphrates Shield," Ağar said, adding that this was one of the dirtiest and bloodiest wars in human history.

"We talk about principles and righteousness, but one of the dirtiest and bloodiest wars in human history is taking place in Syria and Iraq," he said.

Muhittin Ataman of the Foundation for Political Economic and Social Research (SETA) identified non-state actors, like the YPG and the SDF, as the leading threats destabilizing the region.

"These are revisionist actors. They generally want change in the country and the region. They have their own habits. Global powers and regional states are protecting and supporting these non-state actors as a means to remain active and relevant in the Middle East," Ataman said.

Stressing that this strategy pays off because of support from major powers but furthers instability, Ataman said, "When we look at it we can easily see that the U.S., Iran, Israel and Saudi Arabia, are all using proxies in their Middle East policies."

Meanwhile, President Erdoğan during a speech in Ankara yesterday confirmed that Turkey was withdrawing 40 soldiers from a NATO drill in Norway after reports emerged that Mustafa Kemal Atatürk and Erdoğan were depicted as enemies.

"There was an incident in Norway. They used a chart where my name and [Mustafa Kemal] Atatürk's Picture was listed as enemies," Erdoğan said.

Stressing that he was informed about the issue by Chief of General Staff Gen. Hulusi Akar and EU Affairs Minister Ömer Çelik, Erdoğan said he was told, "they were withdrawing our 40 soldiers from there [Norway]."

"I told them to do it immediately. There can be no such alliance," he said.