Thousands protest US move on Jerusalem in Istanbul 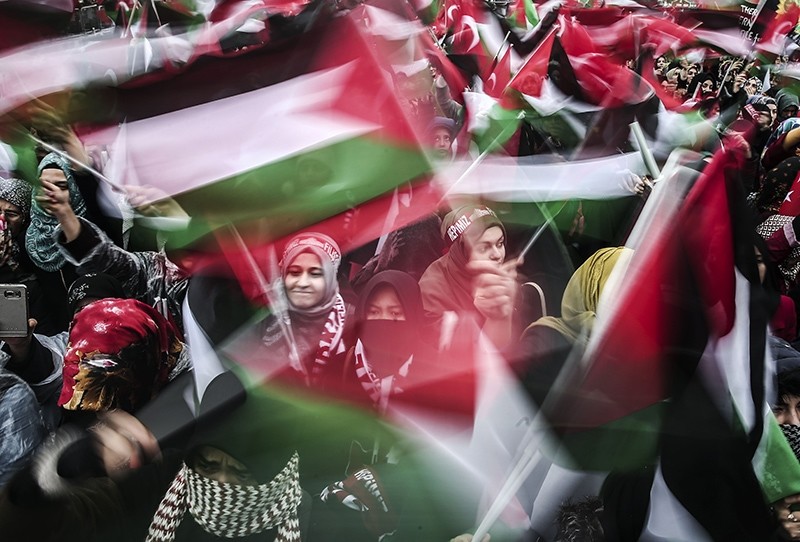 Thousands of people flocked Sunday to Istanbul's Yenikapı Square, protesting the U.S. move to recognize Jerusalem as the capital of Israel.

Palestinian ambassador to Ankara Faed Mustafa was among the protestors. Speaking at the rally, Mustafa said, "Peace can never prevail without independence of Palestine, and Palestine cannot be an independent state without Jerusalem as its capital."

He went on to say Jerusalem was not the capital of Israel. "It is sacred land on the earth. Israel occupied it forcibly.

Women and men of all ages, student groups, and families came together to show solidarity with Palestinians in the rally titled "Jerusalem belongs to Islam," organized by Felicity party.

Waving the flags of Turkey and Palestine, the demonstrators chanted slogans such as "Hail to Hamas, carry on resistance" and "Thousand greetings from Istanbul to Gaza resistance."

The rally started late due to heavy rainfall.

On Wednesday, U.S. President Donald Trump announced the U.S.' recognition of Jerusalem as Israel's "undivided" capital and said the U.S. Embassy would relocate from Tel Aviv to Jerusalem.

Jerusalem remains at the heart of the Israel-Palestine conflict, with Palestinians hoping that East Jerusalem — now occupied by Israel — might eventually serve as the capital of a future Palestinian state.