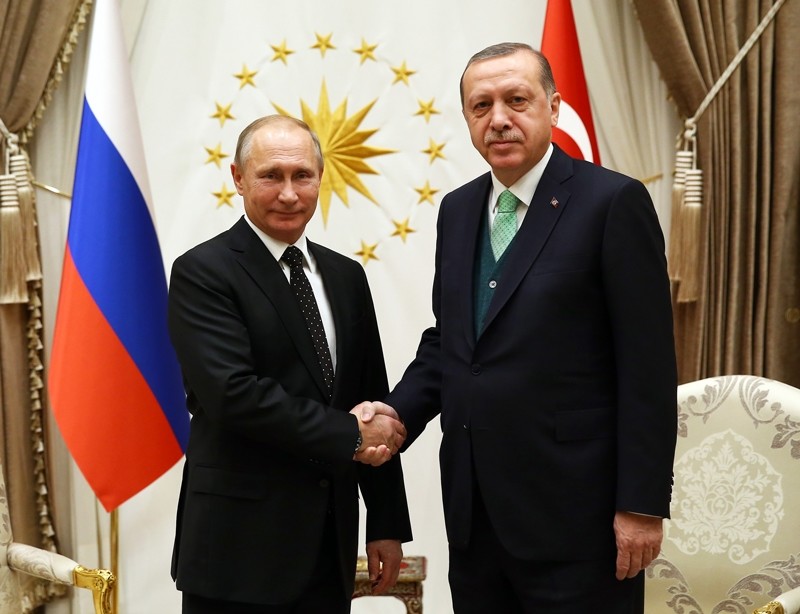 President Recep Tayyip Erdoğan and his Russian counterpart Vladimir Putin on Monday met in Ankara to discuss the latest developments in the Syrian crisis as well as Trump's internationally-opposed move to recognize Jerusalem as Israel's capital.

Erdoğan said in a joint news conference after the meeting that Israel sees the U.S.' Jerusalem move "as an opportunity to ramp up oppression against Palestinians."

"The number of Palestinians injured by Israeli forces is now over 2000," he said.

He also pointed out that Russia and Turkey share the same approach on the matter. "We agreed to continue our contacts in this regard."

Putin underlined that the U.S. decision to recognize Jerusalem as the Israeli capital did nothing to help to solve the conflict, and was destabilizing the situation in the Middle East.

"The situation should be resolved by 'direct contacts' between Israel and Palestine," he added.

Prime Minister Binali Yıldırım also commented on Putin's visit: "It is not a coincidence that Mr. Putin is here in Turkey today."

"Palestinians, who have for years paid a heavy price for peace, are not alone in the face of this unjust, unlawful and arrogant decision," he said, adding: "Only Turkey has a [de facto] embassy in Jerusalem, and it is accredited to Palestine, not Israel."

Erdoğan said Russia, Turkey and Iran as the guarantor states that brokered a cease-fire in Syria in December 2016 would soon hold a repeat of talks held in the Russian resort of Sochi last month.

"As the guarantors of Astana, we will make a significant contribution to the process carried out in Geneva to find a permanent political solution to the Syrian conflict," he added, referring to the UN-backed peace talks.

Putin, who earlier confirmed the Russian military withdrawal from Syria had begun, said "almost" all of Syria's territory had been cleaned of terrorists.

"I would like to appreciate Erdoğan's personal efforts and contributions to the solution works for Syria," he added.

Reiterating that cooperation with Russia strengthens day by day, Erdoğan said that trade with Russia had risen 30 percent as of the first 10 months of 2017.

Relations between the two countries were tense after Turkey shot down a Russian fighter jet for violating its airspace in 2015. But the two have since restored bilateral relations.

As Erdoğan hinted at a meeting possibly next week in Sochi, Putin said Russia hoped to sign credit agreements for the defense industry with Turkey in the near future.

The meeting, which was closed to the media, started at 7:45 p.m. local time (1645GMT) and lasted about an hour at the Beştepe Presidential Complex.

The last time the two leaders met in person was in the Russian resort of Sochi on Nov. 22, when they held a summit on Syria with Iran.

Prime Minister Binali Yıldırım also commented on Putin's visit: "It is not a coincidence that Mr. Putin is here in Turkey today."

"Palestinian people, who have for years paid a heavy price for peace, are not alone in the face of this unjust, unlawful and arrogant decision," he said, adding "Only Turkey has a [de facto] embassy in Jerusalem, and it is accredited to Palestine, not Israel."