Jerusalem both holy land and playground for regional politics 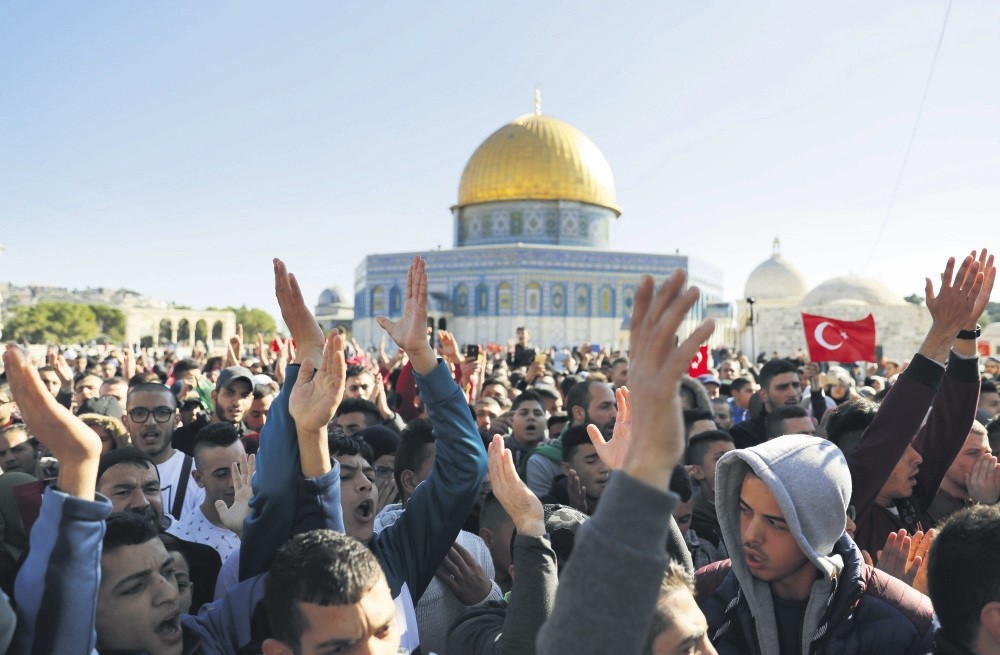 Jerusalem is a holy city that is highly valued by Jews, Muslims and Christians, and according to experts, beyond its holy status, the city also has a critical value in terms of world politics, which is why Trump's decision has faced backlash by many

U.S. President Donald Trump's decision to recognize Jerusalem as Israel's capital has been met with outrage worldwide, emphasizing the city's religious importance, not only for Jews, but for Muslims and Christians, as well. However, according to experts, Jerusalem is significant as a holy center as well as for its critical role in world politics, meaning that both Trump's decision and the reactions of those who oppose it could have worldwide repercussions.

Speaking to Daily Sabah,Turan Kışlakçı, a Middle East expert and freelance journalist, said Jerusalem is one of the most critical points in the region, being in the middle of the Egyptian, Jordanian and Arabian peninsula, which might be another cause behind the decision. "It dominates the whole region," Kışlakçı said, contending that the aim is to make it impossible to live together in the region, preventing the possible emergence of a common idea.

"In addition, Jerusalem is quite close to energy resources, mainly the Suez Canal and the resources in the Mediterranean," he said.

The international community expressed strong opposition to the Trump administration, saying the dispute over Jerusalem should be dealt with through U.N. resolutions and negotiations between Palestinians and Israelis rather than in a unilateral step by the White House.

In addition to the leaders of the Muslim world, Russia, China, the United Kingdom and the EU said the Jerusalem move is a roadblock for the two-state solution and that it would further fuel instability in the region.

The Organisation of Islamic Cooperation (OIC) decided Wednesday to recognize East Jerusalem as the capital of Palestine in response to Trump's recognition of Jerusalem as Israel's capital last week.

According to Ali Bakeer, an expert on Middle Eastern affairs, the decision will further undermine and delegitimize the role some Arab countries such as Saudi Arabia and the UAE, as many people already believe that they are a part of the plan.

"Anti-U.S. sentiment is very high in the Middle East due to such irresponsible actions, and I think this will further make it very difficult for the U.S. to work in the region as it will lose more friends and allies than it did in the past few years," Bakeer said, adding that Trump's decision regarding Jerusalem will prove counterproductive when it comes to protecting Washington's interests in the region."It will help some other countries utilize the issue in order to rebuild their credibility in the Arab world, such as Iran," he added.

In an analysis for Anadolu Agency (AA), Hasan Basri Yalçın, a professor of international relations at Istanbul Commerce University, mentioned the long history of U.S. presidents' position on the issue, saying Trump is no exception."During the election campaign, he made the same promise in order to garner the support of the Israeli lobby and secure American Evangelical voters. As a traditional election promise, it did not receive much attention. After the elections, he could easily neglect what he said. In fact, this is the general trend of Trump's presidency," Yalçın said, adding that with this decision, it has now become clear that Trump has no real strategy.

Similar concerns of Trump's closeness to Evangelals were also mentioned in an article in the Financial Times last week written by Simon Schama. Schama explained the relation of Trump's move as "wrapping himself in the robe of Christian evangelism," adding that if the aim is peace, being close to Evangelicals is not the way to go.

The sensitivity concerning Jerusalem stems from the fact that it is home to Temple Mount to Jews and the Islamic Haram al-Sharif built on top of it. The site includes the Al-Aqsa Mosque, the third-holiest site in Islam, and the Dome of the Rock. The Temple Mount the site of ancient Jewish temples and is the holiest site in Judaism.

"The reason evangelicals love Israel is that the timetables of the second coming require the establishment of a third temple, followed by Jewish conversion and the advent of the last days," Schama explains, adding that Vice President Mike Pence is also a devoted Evangelical Christian, a branch of Protestantism.

"They aim to force God to bring an apocalypse," Kışlakçı said, explaining Evangelicals' interest in Jerusalem. "By causing a big war in the region, they aim to bring on an apocalypse. That is why they pushed Trump for the decision," he said.

As the reason behind the move, Yalçın refers to two possibilities. One of them is Trump's own pwesonality.

"It's implied that Trump is an ignorant leader paying no attention to the outcomes of his behaviors," he said, adding that although this seems like a compelling explanation, since the move came at a critical time, there still could be some level of rationality behind it.

As the other reason, Yalçın points at Trump and his plans with his son-in-law Jared Kushner.

"There are those who claim that Trump and Kushner, because of their ideological affinity, are designing a new order and their recognition of Jerusalem as the capital of Israel is an important part of that plan. However, such an explanation requires us to first make sense of Trump's general lack of concern repeatedly displayed in previous cases. Trump might find himself close to Evangelical and Jewish expectations, but he is not the only American president to feel such an affinity," Yalçın said, indicating that although appealing for a president, it is too dangerous a move to act on, which is why it was dismissed by his predecessors.

Jerusalem was first put under international sovereignty and control with the 1947 U.N. Partition Plan, which recommended the division of historical Palestine into Jewish and Arab states to end the conflict in the region. The U.N. opted for special status, as Jerusalem is holy to Jews, Christians and Muslims. However, during the 1948 Arab-Israeli War, Israeli forces declared West Jerusalem part of Israel, ignoring the U.N. recommendation. In the 1967 Six-Day War, Israel again targeted Jerusalem, taking control of the eastern part of the city, which was previously under Jordanian control.