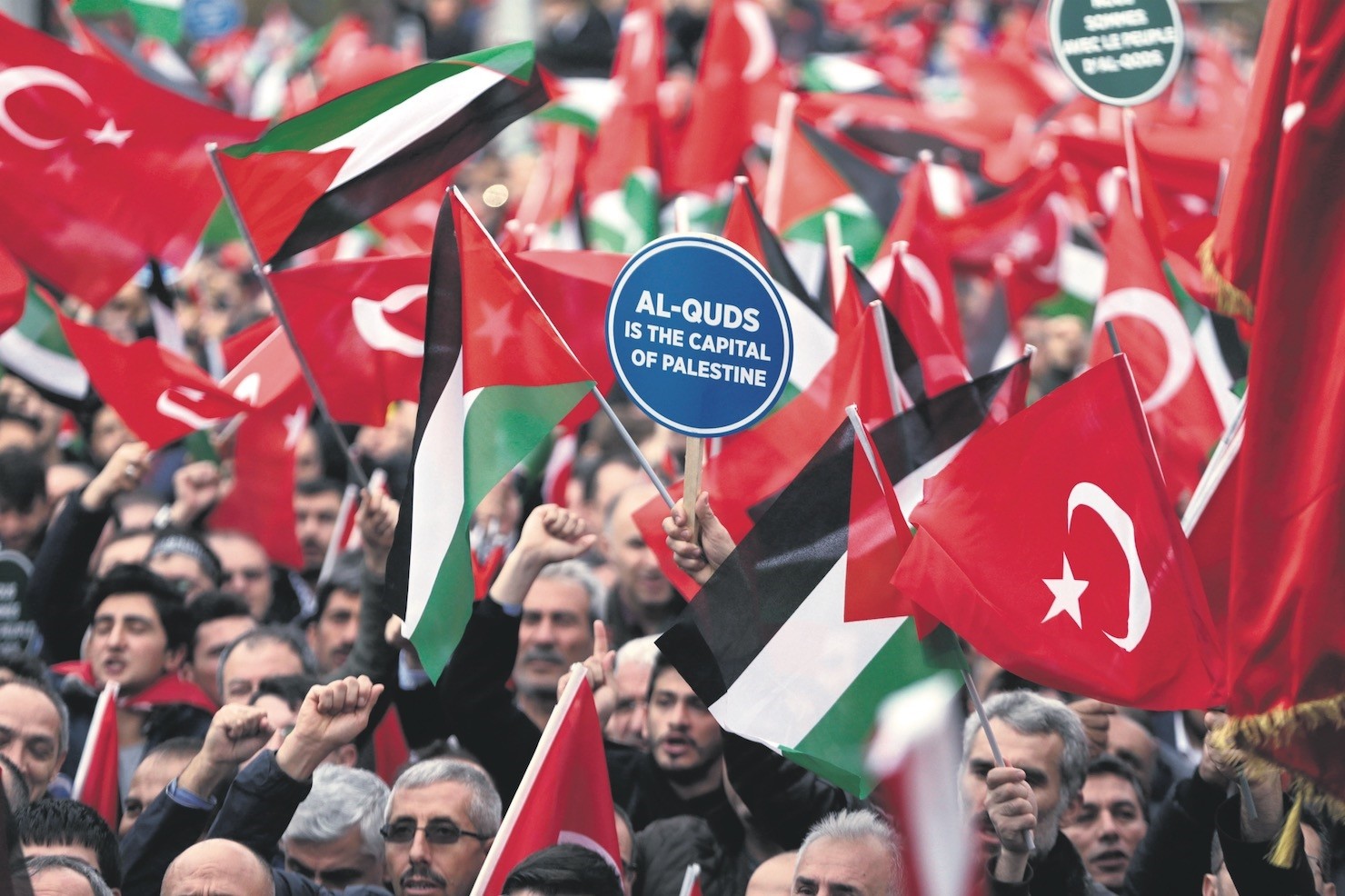 From the day the U.S. recognized Jerusalem as Israel’s capital, after which OIC members declared east Jerusalem as capital of Palestine, the chain of protests on the side of Palestinians have been getting larger not only in the region, but around the world

Many people around the world flocked to the streets over the weekend to protest President Donald Trump's decision to move the U.S. Embassy to Jerusalem from Tel Aviv. Crowds in the U.S., Pakistan, Netherlands, Germany, Lebanon, Jordan, Australia, Montenegro, Iran, Morocco, Poland, the U.K, Greece and Indonesia gathered to protest Washington's controversial move. Last Wednesday, Trump announced his decision to recognize Jerusalem as Israel's capital and to move the U.S. Embassy from Tel Aviv to the holy city. The dramatic shift in U.S. policy drew a storm of condemnation and protest from across the Arab and Muslim world.

His decision has not only aroused ire in the Turkish population, but it has also been rejected by many countries. On Saturday, thousands in the U.S. gathered near the White House in a demonstration pioneered by the nation's largest Muslim civil rights and advocacy organizations, the Council on American-Islamic Relations (CAIR), American Muslims for Palestine (AMP), Islamic Circle of North America (ICNA), Muslim American Society (MAS), the U.S. Council of Muslim Organizations, the Turkish American National Steering Committee (TASC) and Jews United Against Zionism.

"Jerusalem is the eternal capital of Palestine whether Trump or his buddy, the war criminal, Benjamin Netanyahu like it or not," AMP Director Osama Abu Irshaid said during his speech to protesters.

"If Mr. President wants to give property to the state of Israel, he should give one of his properties – if he really owns them," Abu Irshaid continued. "But we don't really know how much he owns because he never declared his taxes."

The AMP director said Jerusalem does not belong to Trump or Israel and Trump has no right to give away the Palestinians' land.

Tens of thousands of Indonesians also protested against the U.S.'s decision yesterday, the latest show of support for the Palestinians in the country with the world's largest Muslim population.

The rally was organized by the top Islamic authority, the Indonesian Ulama Council, and supported by the government as well as several other Islamic organizations.

Police said 80,000 protesters gathered at the National Monument, a tower that looms over central Jakarta, waving the Palestine flag and banners reading "Free Palestine" as they chanted "God is the greatest!"

Dressed mostly in white, the demonstrators urged the U.S. to change its decision.

Indonesia's religious affairs minister and Jakarta's governor were among those at the protest site just a few meters from the U.S. embassy, which was cordoned off behind coils of razor wire.

Meanwhile, the U.N. Security Council will draft a resolution at the beginning of this week, which would find that any change to the status of Jerusalem will have no legal effect and must be reversed. The Turkish Foreign Ministry sources said that the draft will be prepared by Egypt, a non-permanent member of the council. It is expected that the U.S. will use its veto power to block the measure while most, if not all, of the 14 other council members were expected to back the draft resolution.

The status of Jerusalem, a city considered holy by Christians, Jews and Muslims, is a sensitive issue in the Israeli-Palestinian conflict.

Israel sees the entire city as its undivided capital. Palestinians want the eastern sector, which the international community regards as annexed by Israel in 1967, as the capital of their future state.