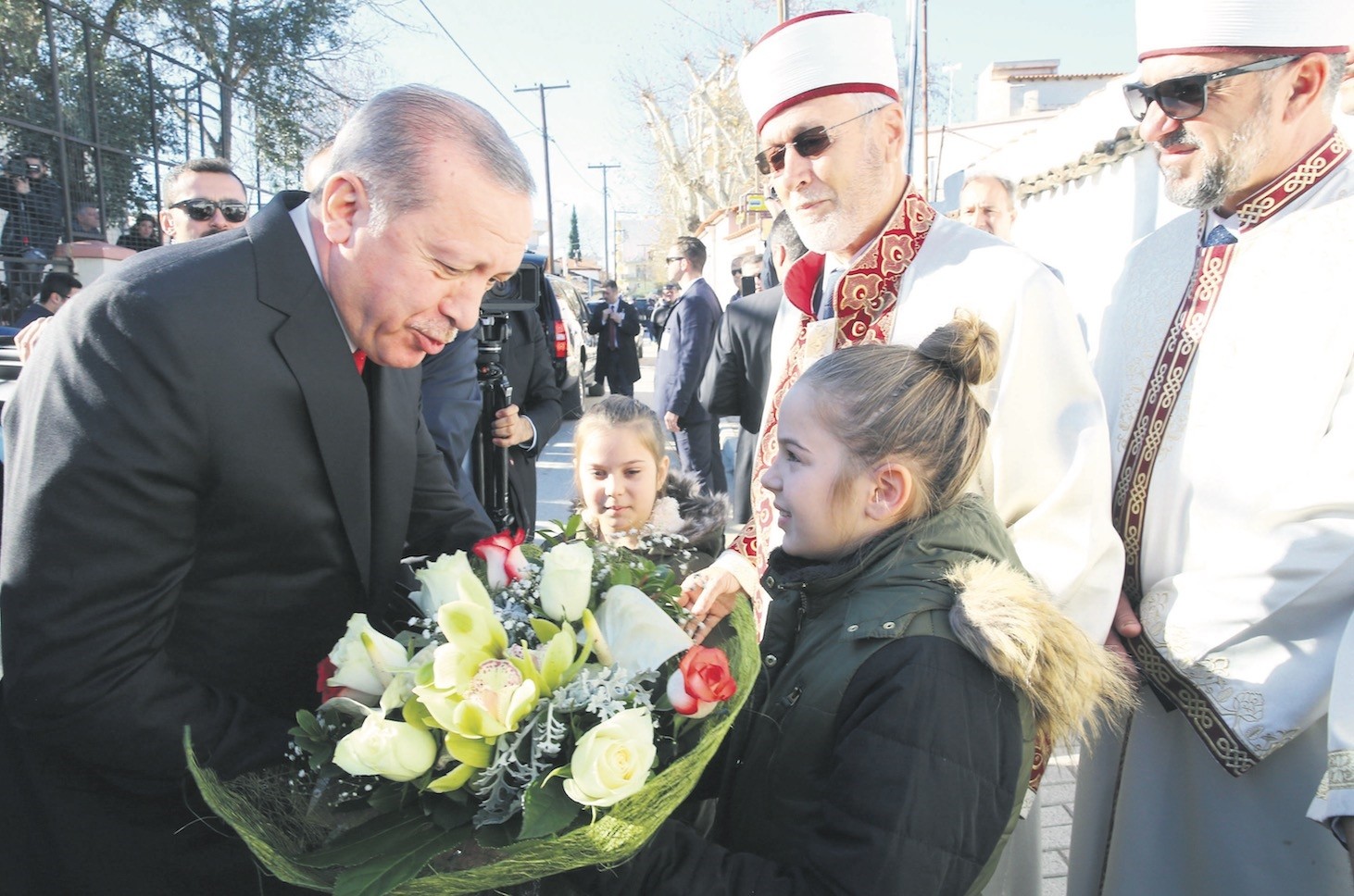 During his visit to Greece, President Erdou011fan met with the Turkish minority in Western Thrace where he said necessary steps for the minority group have not been taken and therefore the Lausanne Treaty should be updated.
by Daily Sabah Dec 18, 2017 12:00 am

Following President Erdoğan's recent visit, during which he discussed the unjust practices against Turks living in the country, Greek officials have shown signs of willingness to find common ground. They announced that efforts to address the minority's demands in relation to the election of muftis in Western Thrace have started

President Recep Tayyip Erdoğan's recent criticism of mufti appointments in Western Thrace has spurred Greece into action to resolve the longstanding problem. President Erdoğan's visit to Greece earlier this month raised hope for turning over a new leaf in bilateral ties in part because it marked the first official visit by a Turkish head of state to Greece in 65 years. In addition to efforts to strengthen relations between the two countries, issues awaiting resolution were on the president's agenda during his trip. Erdoğan openly criticized Greek officials for not meeting the needs and demands of Turks living in the country.

He said that while "Muslims in Western Thrace have not been allowed to choose their own mufti from their community; this is not the case for the patriarch in Turkey."

"You cannot find any discrimination against Turkish citizens of Greek origin in Turkey. However, in the Western Thrace, even writing the word 'Turkish' is not allowed," he said, adding that Greek lags far behind in terms of meeting the demands of minorities.

President Erdoğan stated that the necessary steps for the minority group have not been taken and therefore the Lausanne Treaty should be updated.

Due to the criticism from the Turkish president, Greek officials have shown signs of willingness to find common ground regarding the issue. Kostas Gavroglu, the minister of education and religious affairs, recently announced that efforts to address the minority's demands in relation to the election of muftis in Western Thrace have started.

Pointing out that the patriarch in Istanbul has been elected by a committee, the minister suggested that a similar formula might be used for mufti elections in Western Thrace.

The minister said the fine details of the mufti elections would be discussed with the opinion leaders from the minority group in Western Thrace.

Acknowledging that the majority of the Muslims in Greece do not welcome muftis appointed by the Greek authorities, Prime Minister Alexi Tsipras accelerated efforts to take concrete steps. Tsipras stressed that longstanding issue needs to be resolved as it adversely affects relations with the minority group.

The Greek prime minister highlighted that the issue should be discussed to find common ground and added that the government aims to reach a point where religious leaders are not questioned by minority groups.

The community of Western Thrace Turks is estimated to have between 100,000 and 150,000 members. The Greek government classifies its Turkish population as "Greek Muslims."

Greek authorities prohibit the use of the word "Turkish" in organization names, and several minority groups have been closed down for using the term.

The Turkish minority community faces various problems as their ethnic identity has not been recognized; therefore, Turkey argues that the Lausanne Treaty needs to be revised.