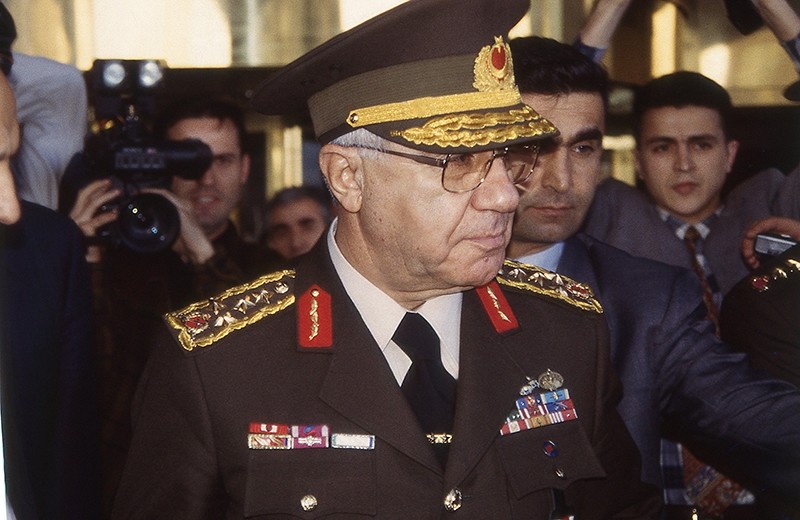 A request by a prosecutor to punish former military figures to life may bring closure for thousands who fell victim to 1997's so-called "postmodern" coup. The prosecutor in the capital Ankara where 103 defendants are on trial, said what happened in 1997 constituted a real coup and asked for life imprisonment for 60 suspects, including a former military chief and his deputy.

An ultimatum to the government by powerful military on Feb. 28, 1997 led to subsequent resignation of the government and further boosted a crackdown on mainly conservative people in the country. The coup did not involve killings - hence it was called a postmodern by some media outlets - but it disrupted the lives of people forced to drop out of school, dismissed from their jobs and jailed on trumped-up charges.

The prosecutor's statement accused 85-year-old retired Gen. Ismail Hakkı Karadayı, who was Chief of General Staff during the coup and his deputy at the time, and retired Gen. Çevik Bir, 78, for plotting to topple the government. The prosecutor asked for aggravated life sentences for the two former generals and 60 other military officials within Bir's command echelon, while he also asked for the release of the remaining 41 suspects. The next hearings were postponed to Jan. 8.

Karadayı served as the chief of the military staff from 1994 to 1998, at a time when the army put pressure on then-Prime Minister Necmettin Erbakan and his conservative Welfare Party over "secular concerns." On Feb. 28, 1997, the military-dominated National Security Council threatened action if Erbakan did not back down. He resigned four months later, whereas the Welfare Party and its successor Virtue Party were banned by the Constitutional Court in Jan. 1998 and June 2001.

Within the scope of the Feb. 28 decisions, the "Batı Çalışma Grubu" (West Study Group) was founded and chaired by Bir, who was considered the "mastermind" of the coup plot, to control the proceeding of the decrees under the name of "Action Plan against Reactionary Forces."

Briefings on secularism were given, particularly to judges, civil servants and media executives, by members of the military. Repression of religious segments of society was hardened, including a ban on headscarves at universities. A great number of civil servants were fired. Heavy censorship was imposed on the media, and opposition journalists were fired. Some companies saw embargoes imposed, on the pretext that they support reactionary politics. "Reactionary" or "irticacı" in Turkish refers to a broad derogatory term used by hardline secular groups to brand any person with religious affiliation.

A total of 103 people were detained for the coup but they were later released pending trial. Almost all of the defendants are military officers but the victims of the coup have repeatedly called for the punishment of "civilians" who helped putschists as well.

In his plea to the court Thursday, Prosecutor Mehmet Hanifi Yıldırım said it was "impossible" to consider Karadayı was not aware of the founding of BÇG, which is viewed as a cadre of putschists.

The prosecutor said the BÇG held meetings at the army headquarters to topple the government. At these meetings, generals discussed ultimatum to the government, declaration of martial law and even how to create a new government after the coup. They also discussed dominance over media, threatening judiciary and statesmen who might oppose the coup and a psychological warfare.

Yıldırım also included the remarks of Erol Özkasnak, a general who served as secretary-general at the office of the Chief of General Staff during the coup, four years after the government resigned.

Speaking in an interview, Özkasnak has said that "postmodern" was "a very good adjective to describe this activity of the Armed Forces," in reference to the coup. He has said he has done his duty in the process "that did not resemble the past coups."

"There was no bloodshed and nobody was upset. It was through democratic means and with the assistance of nongovernmental organizations," he said since then.

Regarding Kemal Gürüz, the former head of the Higher Education Board that oversees universities, Yıldırım said the defendant coordinated with the BÇG and blacklisted academics, university staff and students.

Fatma Benli, a lawmaker from the ruling Justice and Development Party (AK Party) was among those watching the trial. A victim of the coup herself, Benli had to drop out of law school when she refused to remove her headscarf at school.

"This trial shows that the laws are applied (on coup plotters). These people who ordered the parade of tanks in Sincan, those who briefed judges, university presidents knew they were committing a crime but thought they would get away with it. Unfortunately, hundreds of thousands of people became their victims. Moreover, the economy was hurt in that process as they forced the closure of 22 banks in that dark era," she said.

Benli called on the public to attend the trials, adding that the coups in fact are not limited to certain people but the whole nation.

"Perhaps you were not targeted by coup plotters but the coups, in the end, harmed all of Turkey," she said.