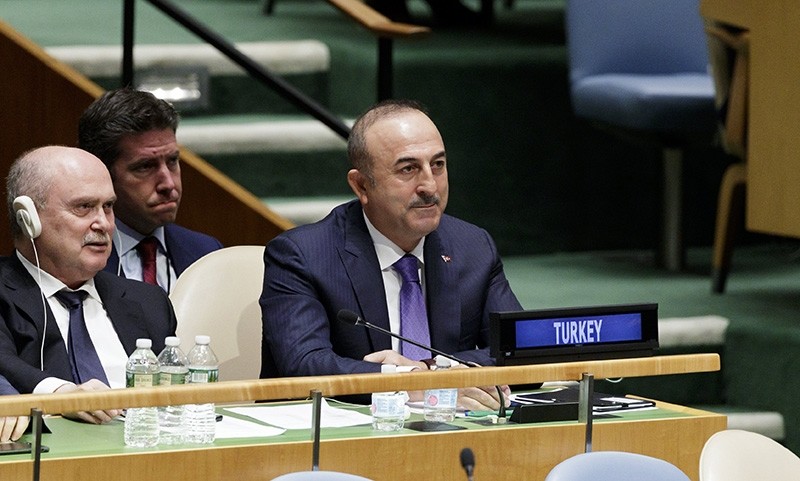 Foreign Minister Mevlüt Çavuşoğlu said Thursday that United Nations members had shown that "dignity and sovereignty are not for sale" by voting in favor of a resolution calling for the United States to drop its recognition of Jerusalem as Israel's capital.

In comments made on Twitter, Çavuşoğlu said that Turkey, Palestine and other co-sponsors thank every country that supported the resolution in the United Nations General Assembly.

Çavuşoğlu had previously criticized the U.S. move during his speech at the United Nations saying: "Palestinians have the right to their own state based on the 1967 borders with East Jerusalem as its capital. This is the main parameter and the only hope for just and lasting peace in the region."

Çavuşoğlu also called the U.S.' threats to cut development aids to countries who voted 'no' at the assembly outright "bullying" and completely "unacceptable."

The top diplomat also urged the U.N. to take serious steps against the move, saying "The U.N. Security Council has failed to fulfill its responsibilities yet again, now this duty falls upon the U.N. General Assembly to bring justice."

"Jerusalem is sacred for all 3 monotheistic religions, it is a humanitarian duty to save the city," he concluded his speech.

The U.N. General Assembly overwhelmingly passed a resolution asking the U.S. to withdraw its decision to recognize Jerusalem as Israel's capital on Thursday, as the U.S. threatened cuts in retaliation.

Applause erupted in the General Assembly hall as the vote was adopted with 128 countries in favor, nine against and 35 abstentions.

Australia, Canada, Mexico and the Philippines were among those who abstained in the emergency vote called by Turkey and Yemen after the U.S. vetoed the same resolution in the U.N. Security Council earlier this week.

The status of Jerusalem has been one of the most sensitive and explosive issues in the decades-long conflict between Israelis and Palestinians.

Israel occupied the eastern half of Jerusalem in the 1967 Arab-Israeli War and later annexed the territory in a move that was not internationally recognized.

More than 300,000 Palestinians live in East Jerusalem, which is home to holy sites for Jews, Muslims, and Christians.