Regulation in new statutory decree applies to July 15-16 only 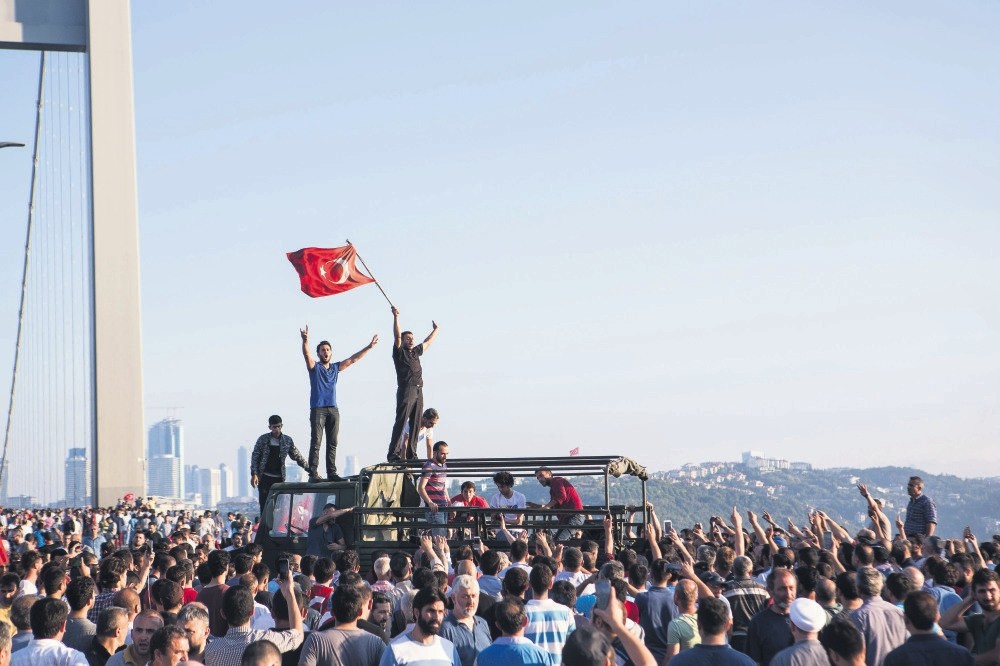 The AK Party said the main goal of the regulation is to make sure that anybody who took to the streets in the coup night and stood against putschist soldiers will not be subjected to any kind of legal investigation.
by daily sabah
Dec 26, 2017 12:00 am

The ruling AK Party made a statement and clarified the decree that envisages all people who took action in tackling the July 15 coup attempt, terrorist attacks and activities that are the continuation of such incidents cannot be convicted, saying that it only applies to the day of the coup attempt and the day after

A controversial regulation in the new statutory decree, released over the weekend, will only apply to the July 15 coup attempt and the day after, government officials and the Justice and Development Party (AK Party) said yesterday.The regulation envisages that all official or unofficial individuals, who took action in the name of resisting the July 15 coup attempt, terrorist attacks and activities that are the continuation of such incidents, may not be convicted, in the event complaints are raised against them in the future. The decree quickly drew harsh criticism from the opposition Republican People's Party (CHP), which called an extraordinary meeting to discuss the issue.

The government and the ruling AK Party, however, clarified the situation with a series of statements yesterday.

Justice Minister Abdülhamit Gül said the regulation would only about repelling the July 15 coup attempt and the day after.

"Any citizen who has tortured someone, broke the law, or took an unjust action outside of preventing the coup, will be tried," Gül said. In southeastern Gaziantep province, he reiterated that the decree applies to the night of the defeated coup and the following morning, to ensure that legal action is not taken against people who left their homes to protect the country.

Criminal Law Expert Ersan Şen told Turkish broadcaster NTV that the regulation should only apply to July 15 and July 16, 2016. Expanding its scope, Şen said, was not possible by law.

Talking to the media yesterday, AK Party Spokesperson Mahir Ünal said the regulation only applies to actions taken on July 15 and July 16, 2016.

"What we have done for the stability, transformation, and growth of this country in the last 16 years is clear. It is also clear what others, who spread lies, are doing."Ünal explained that the main goal of the regulation was to make sure that anyone who took to the streets that night or stood against putschist soldiers to defend the country will not be subjected to any kind of legal investigation or prosecution.

AK Party Deputy Chairman in charge of Economy and former Development Minister Cevdet Yılmaz said the regulation was aimed at strengthening the counterterrorism efforts in the country.

"One of the existential reasons of the AK Party is to strengthen democracy and make the people's will count. It cannot be the subject of conversation that the AK Party takes steps that shrink the space of democracy," Yılmaz said.

Stressing that the steps being taken are in line with the country's needs, Yılmaz said: "We are taking these steps in terms of whatever the security of our country [requires]. Nobody can prevent us from quenching our security needs. There is no democratic freedom or development where you are not safe. But the opposition criticizes it with different methods. The precautions we take are toward our struggle against terrorism in its essence."

FETÖ, led by U.S.-based Fetullah Gülen, attempted to bring down Turkey's democratically elected government through a coup attempt on July 15, 2016, which was successfully thwarted after millions of people took to the streets and defended democracy. A total of 249 people were killed and nearly 2,200 people were injured during the coup attempt.

The terrorist group is also accused of orchestrating a long-running campaign to infiltrate Turkish state institutions, including the military, judiciary and police with the ultimate goal of taking over.