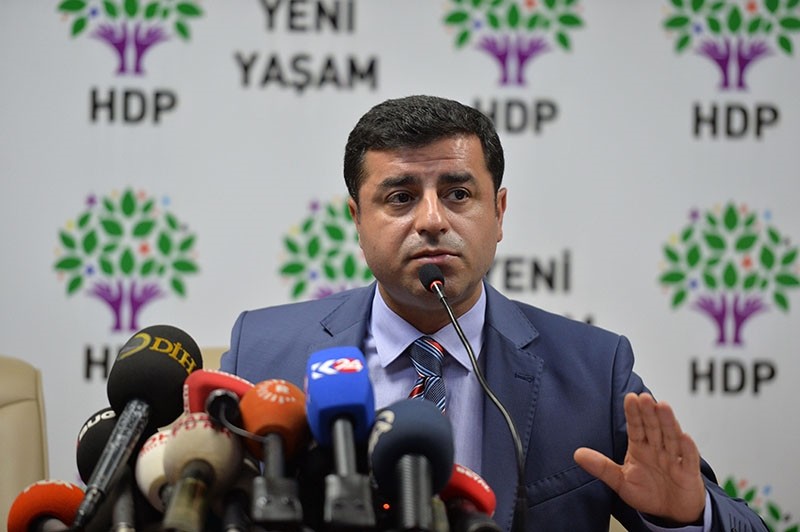 Selahattin Demirtaş, the co-chairman of the pro-PKK Peoples' Democratic Party (HDP) who is currently on trial under arrest for several terror-related charges, stated Thursday that he will not be a candidate for the next term.

Informing his party on the issue, Demirtaş, who has held the post since June 2014, said in a letter that he does not want to be a candidate for the party chairmanship in the upcoming ordinary congress of his party which is planned to take place on Feb.11.

Previously, Demirtaş demanded from his party members to not change the party code, which does not allow a member to be a chairman for more than two terms, for himself. However, after an evaluation process in the Party Assembly, it was decided that there is no obstacle for Demirtaş to run for the third term since he was elected once in a normal congress and once in an extraordinary congress. Later on, in the Central Executive Committee of the HDP, it was emphasized that Demirtaş is unarguably the co-chairman candidate of the party.

In November 2016, 13 HDP lawmakers were arrested, and 10 of them, including HDP co-chairs Selahattin Demirtaş and Figen Yüksekdağ, remain under arrest awaiting trial on charges related to membership, leadership and committing crimes for the PKK terrorist group.

The lawmakers face prosecution under anti-terrorism legislation after their parliamentary immunity was lifted in May 2016. In February 2017, Demirtaş was sentenced to 5 months in prison by the 2nd Criminal Court of First Instance in Doğubeyazıt for insulting "the Republic of Turkey, the Turkish nation, the Turkish state and state institutions." In a separate case, Demirtaş was also sentenced to pay 15,000 Turkish liras in compensation to President Recep Tayyip Erdoğan for insult charges.

Demirtaş, who has been active in pro-Kurdish and pro-PKK political circles since the early 2000's, has served as a deputy from Diyarbakır, Hakkari and Istanbul provinces since 2007. He also ran in the 2014 presidential elections, finishing third by receiving 9.76 percent of the votes.

Initially an active figure in the reconciliation process involving the PKK and the government, with the rising tensions in the Syrian civil war and the PKK finding itself more room to exploit people in Syria through its offshoot PYD, Demirtaş adopted a more hawkish tone and started calling on Kurdish people in the region to riot against the Turkish state in the face of terror operations against the PKK.

In October 2014, amid the Daesh siege on PYD-held Kobani, Demirtaş and other HDP officials called for a major riot, dubbed as the October 6-7 Kobani protests, in which more than 40 people were killed and some 500 others were injured in clashes between pro-PKK and conservative Kurdish groups and security forces throughout Turkey, especially in the southeast.

This was a major blow for the HDP and its public face Demirtaş, who repeatedly stated that they aim to be an umbrella party appealing to all of Turkey instead of a regional and ethnic party. Their later calls, however, found little support.

The HDP has come under fire for its close links to the PKK, which is listed as a terrorist organization by Turkey, the U.S., and the EU. Members of the party have so far declined to call the PKK a "terrorist group," and have attended PKK militants' funerals, two of whom were the suicide bombers that killed tens of civilians in multiple bombings in Ankara.