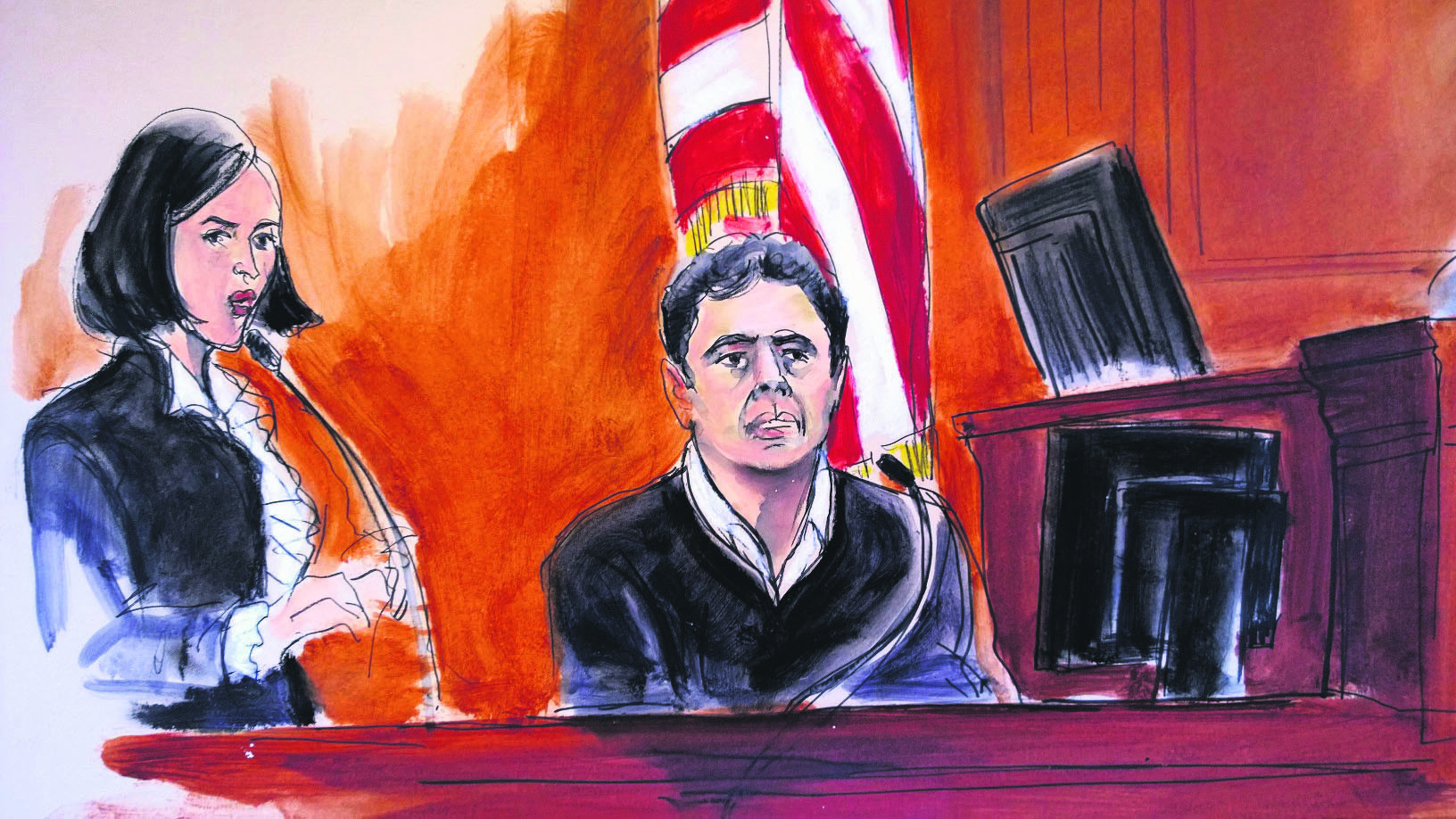 In this Dec. 15, 2017 courtroom artist's sketch, Atilla, (R), testifies during his trial on the Iran sanctions case in New York. He was accused of helping Iran evade U.S. sanctions and was found guilty on Wednesday.
by Mustafa Kırıkçıoğlu Jan 05, 2018 12:00 am

Halkbank's Deputy CEO Mehmet Hakan Atilla was found guilty on five of six charges by a jury after a controversial trial, which was overshadowed by presiding Judge Richard Berman's links with FETÖ and first suspect Reza Zarrab having turned state's witness

After days of deliberation in the controversial Iran sanctions case, a New York federal jury late Wednesday convicted the deputy CEO of Turkey's state lender Halkbank, Mehmet Hakan Atilla, on five charges including violating U.S. sanctions against Iran, crimes to deceive the U.S. and defrauding U.S. banks while they acquitted him on a single money laundering account. Atilla's trial on subverting now-lifted U.S. sanctions on Iran came to a close in the Southern District of New York court after the jury found Atilla guilty of five out of six charges, disregarding legal contradictions in the evidence and presiding Judge Richard Berman's proven links to the Gülenist Terror Group (FETÖ).

Atilla is convicted of bank fraud, conspiracy to defraud the US and conspiracy to commit money laundering. He was cleared of another money laundering charge. Commentingon Atilla's conviction, presidential spokesman İbraihm Kalın called it a "legal scandal," and said Turkey will continue to closely monitor the case and appeals process.

"This [verdict] is a scandalous decision of a scandalous case. Moreover, it is loud and clear that this case is a conspiracy aimed at complicating Turkey's internal politics and intervening in Turkey's internal affairs," Kalın said.Defense attorneys made a second mistrial request earlier on the same day as the verdict, saying that prosecutors questioned Atilla based on a report prepared by a fugitive member of FETÖ, Osman Zeki Canıtez. The request was declined by Judge Berman, whose links to FETÖ has long overshadowed the trial.

Turkish-Iranian businessman Reza Zarrab, who masterminded the scheme but became a government witness against Atilla for a lighter sentence, earlier accepted all the charges against him.

Istanbul Medipol University Law Faculty Academic Selman Öğüt told Daily Sabah that the decision is unfair and does not comply with international law as the real perpetrator of the scheme, Reza Zarrab, made a defense plea, while Atilla, who does not have any relation to the case, was sentenced.

"Zarrab himself stood as witness in the court on how he carried out all the illegal business, but ironically, he later turned into an informant and blamed others. I don't think the court of appeals will overturn the decision. In the U.S., almost 90 percent of cases are concluded in court," Öğüt said.

During the trial, the defense team asserted that Zarrab and the former CEO of Halkbank, Süleyman Aslan, should be punished instead of Atilla. They pointed to Zarrab's testimony in which he explained phase by phase how he violated the sanctions. The Foreign Ministry released a statement yesterday saying that the verdict is "unjust and unfortunate" and the trial was based on evidence that was "fake and open to political exploitation."

"The U.S. court, in a process in which Turkey's internal affairs were discussed based on a fictional setup and realized based on fake and so-called evidence open to political abuse, has unprecedentedly intervened in Turkey's domestic affairs," the statement said.

It added that giving the opportunity to several FETÖ members to make unrealistic claims and present fake evidence via material and logistical support by the U.S. destroyed the seriousness and credibility of the judicial process.

Deputy Prime Minister Bekir Bozdağ also commented yesterday on the decision and said that the jury's decision does not carry any legal value for Turkey and claimed that it is against international law.

Turkey's state-owned Halkbank said yesterday that the bank was not a party in the Iran sanctions evasion case and there have not been any administrative or financial measures taken against the bank so far.

Economist Taha Meli Arvas told Daily Sabah that appeals are very difficult to lodge and win but Zarrab's incredibility and evidence against him may induce a change in this situation.

"The court in which the defendant was tried has a 99.6 percent conviction rate, practically no chance of being acquitted. However, the defense brought up many key issues and much of the material that would impeach Zarrab's credibility was tossed out by the judge. These f

actors may aid in the appeals process," Arvas said.

He added that the penalty the bank may incur is a matter for the U.S. Treasury and does not involve the criminal case in question. "Whether or not the Treasury department fines Halkbank is at the discretion of the executive branch," he said.

A transcript of a phone conversation between Zarrab and his uncle surfaced in late December in which Zarrab said he needed to lie in order to get a reduced sentence.

"Ahad, it is not like that. I am telling you. Here, when you come around and say 'Okay, yes, I did this sh*t,' look, this leaves you in peace. Once you confessed, they do not mess with you," Zarrab was recorded telling his uncle.

The transcript was regarded as an apparent acknowledgment of a plea bargain between the U.S. judiciary and Zarrab.

Zarrab was also accused of sexually assaulting a former elderly cellmate at a Manhattan prison on Dec. 7 when he was awaiting trial. The accuser, filed a lawsuit alleging that the assault occurred between November 2016 and March 2017, when the men were held in the same cell at the Metropolitan Correctional Center in Lower Manhattan.

The alleged rape victim and Zarrab became friends in prison and Zarrab offered to pay for him to retain a private lawyer, as he was being represented by a public defender. The lawsuit also alleged that the man "felt helpless and unable to fight off the younger and stronger man," and added that the victim was "too scared and embarrassed at that time to complain or to seek help."

Evidence has revealed proof that Berman was hosted at a FETÖ-linked event in Istanbul. Documents confirm that Berman's trip to Turkey was paid for by the terrorist group, including all of his transportation and hotel fees, after the failure of FETÖ's Dec. 17 and Dec. 25, 2013 operations, which was a so-called corruption inquiry that turned out to be a plot perpetrated to topple the government.

The hotel bills showed in detail that Berman stayed one night at the Four Seasons Hotel in Istanbul in room number 2203 on May 6, 2014, where a symposium on justice and the rule of law was organized by the FETÖ-linked Yüksel Karkın Küçük (YKK) Attorney Partnership.

At the symposium, Berman targeted the Justice and Development Party (AK Party) government and claimed that Turkey is governed by a "one-man rule," and suggested that the current government must be changed – ideas consistently propagated by FETÖ supporters. The judge had also criticized the dismissal of FETÖ-linked judges, prosecutors and police officers on charges of unlawful wiretapping.