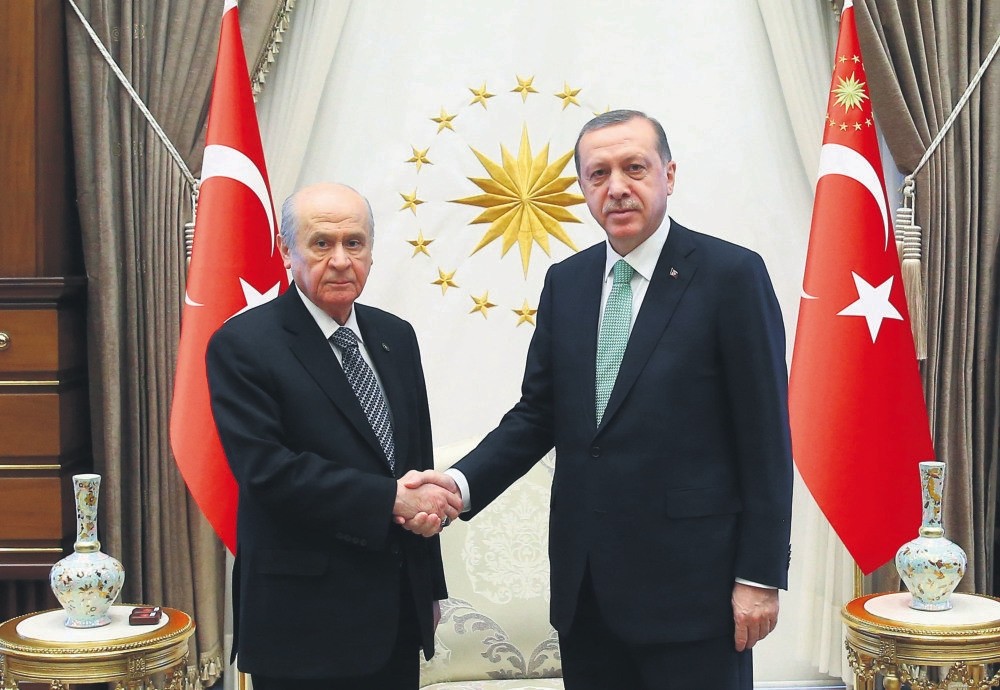 The new presidential system will force smaller parties to merge with larger ones to form alliances, experts argue, after the opposition MHP said it will support the AK Party candidate President Erdoğan in the 2019 presidential elections

A possible alliance between the Justice and Development Party (AK Party) and opposition Nationalist Movement Party (MHP) hints at a major shift in Turkey's political culture ahead of the 2019 elections, experts have said. President Recep Tayyip Erdoğan yesterday welcomed MHP Chairman Devlet Bahçeli's announcement Monday that his party will support Erdoğan in the 2019 presidential election and praised the party for its stance to secure Turkey's national interests. "I need to emphasize the national stance taken by Devlet Bahçeli. Because of this, those who aim to divide the nation will not achieve their objectives. We are determined to maintain the spirit of Aug. 7," Erdoğan said in a speech at the AK Party's first group meeting of 2018 in Parliament.

There will be two main blocs with two prominent ideologies, but this does not mean that there will two main parties. Other small parties will take their positions according to the two main blocs." "Alliances are needed in order to gain 50+1 of the vote, and therefore, the parties that share similar ideologies will either form legal alliances or cooperate with larger parties," he said.

It was announced yesterday that President Erdoğan will hold talks with Bahçeli at the Presidential Palace complex today to discuss the fine details of a possible alliance.

The first step for a political alliance for the 2019 presidential election came from the MHP after Bahçeli announced on Monday that his party will not nominate a candidate and instead support Erdoğan's re-election.

The MHP was formed in 1969 by retired Colonel Alparslan Türkeş, who had become the leader of the far-right Republican Villagers Nation Party (CKMP) in 1965. The party mainly followed a pan-Turkist and ultranationalist political agenda throughout the latter half of the 20th century, but later moderated its views under the leadership of Bahçeli, who took over after Türkeş's death in 1997.

The MHP received as much as 18 percent of the vote in the 1999 parliamentary election but slipped below the 10 percent electoral threshold with 9.5 percent in 2002. It has exceeded 10 percent in the elections since and took 11.9 percent in the November 2015 elections.

Commenting on the future implications of the alliance between the MHP and AK Party, Miş said: "The MHP's decision to support the AK Party will urge parties from the other bloc to seek an alliance among themselves. However, it does not seem easy for those parties to form an alliance since they have different ideologies."

Erdoğan and Bahçeli have said that the 2019 elections will take place between those who share a national stance and groups who are being manipulated by others.

"As President Erdoğan has stressed, the parties who share a national stance are coming together while the others oppose them. Bahçeli's step is not surprising since the MHP is a nationalist party," Emin Pazarcı, a columnist for the Akşam daily told Daily Sabah.

He added that with the executive presidential governing system a "two-bloc system" might ensue in politics. He also said that the MHP has been long in favor of a presidential system.

Bahçeli has repeatedly said that his party will take steps in line with Turkey's national interests. Last year, a joint effort by the AK Party and MHP evolved into an alliance to amend the Constitution, and the two parties campaigned for the April 16 constitutional amendment package that switched the country's governmental system into an executive presidential system, which is scheduled to take effect with the upcoming presidential election in November 2019.

Erdoğan has called on opposition parties not to ostracize themselves from the process and to join the efforts to prepare the new governing system. Bahçeli responded to the president's call and announced his party's support for the AK Party during the process.

Underlining the MHP's previous support for the ruling party, Okan Müderrisoğlu, Ankara correspondent for the Sabah daily, said: "Bahçeli considers that Turkey is facing threats that pose great risks to its existence and therefore feels obliged to do what is necessary."

Müderrisoğlu added that as the presidential system has been approved, the MHP now looks to prevent a crisis that might target the process.