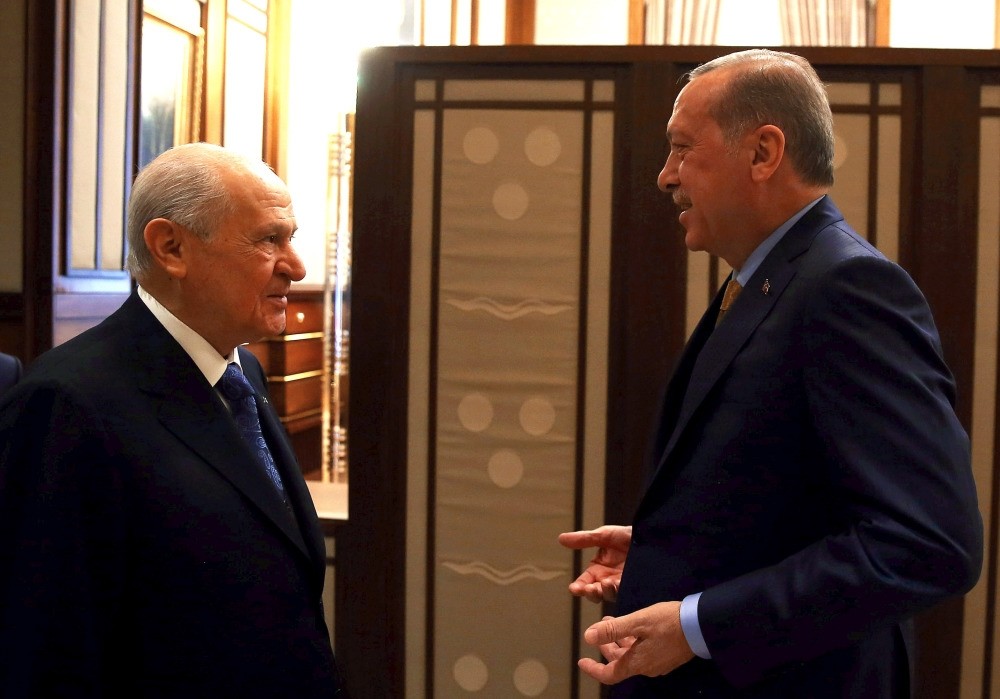 MHP Chairman Devlet Bahu00e7eli (L) announced Monday that his party would not nominate a candidate and instead support President Recep Tayyip Erdou011fan's re-election, which became the first step toward a political alliance for 2019 presidential elections
by Daily Sabah Jan 12, 2018 12:00 am

The AK Party is working on an alliance with the MHP within the framework of adjustment laws, establishing a joint committee and calling it a national agreement

Justice and Development Party (AK Party) spokesman Mahir Ünal has said that the possible alliance between his party and the Nationalist Movement Party (MHP) for the upcoming elections would be a "national agreement." "The talks we are having with [MHP Chairman] Bahçeli are also a step toward the national agreement. The AK Party is working on the alliance issue within the framework of adjustment laws," Ünal said yesterday at AK Party headquarters in Ankara. He stressed that the two parties will establish a joint committee. The first step for a political alliance for the 2019 presidential election came from the MHP after Bahçeli announced on Monday that his party would not nominate a candidate and instead support President Recep Tayyip Erdoğan's re-election campaign.

"The MHP will act in accordance with the Yenikapı spirit and will make a decision to support Recep Tayyip Erdoğan," Bahçeli said, which was welcomed by Erdoğan on Tuesday, during Erdoğan's speech at the AK Party parliamentary group meeting.

"I need to emphasize the national stance taken by Devlet Bahçeli. Because of this, those who aim to divide the nation will not achieve their objectives. We are determined to maintain the spirit of Aug. 7," Erdoğan said, referring to the rally that took place in the Yenikapı district of Istanbul on Aug. 7 with the participation of all political leaders, except for those from the Peoples' Democratic Party (HDP), which is considered a symbol of political consensus following the July 15, 2016 failed coup.

Bahçeli had previously called the alliance a "people's alliance" while Erdoğan had termed it a "domestic and national alliance."Now that the willingness for an alliance has been revealed, AK Party cadres are working on how the next steps taken will go forward. AK Party officials are reportedly analyzing previous practices in the world and examining which countries applies what kind of models. Then, considering conditions in Turkey, a "Turkish model" will be developed for the alliance.

Commenting on the AK Party-MHP alliance, journalist Avni Özgürel said that this is "the largest and most important association in our history both in terms of timing and in terms of its nature." Özgürel also stressed that such an alliance has never taken place in the recent history of the Republic of Turkey. As for its goals, Özgürel said that the aim is to bring the two parties to a national and local line."There is only one goal. The framework expressed by Mr. Bahçeli. The president has always emphasized the importance of reconciliation since July 15. There might be different conclusions on different topics, but the president has invited everyone to a common line in terms of Turkey's future relations, national interests and common threats. We see that this invitation has been taken up by the MHP since July 15. For this reason, I also find the timing very good," Özgürel said.

Meanwhile, the MHP is entering a three-day camp to address issues on Turkey's agenda that will be held from Jan. 19 to Jan. 21 before the March 18 convention. The camp will be held in Kızılcahamam and the provincial heads will also meet there.

Bahçeli is expected to share his views and goals regarding the three elections in 2019.The MHP was formed in 1969 by retired Colonel Alparslan Türkeş, who became leader of the far-right Republican Villagers Nation Party (CKMP) in 1965. The party mainly followed a pan-Turkist and ultranationalist political agenda throughout the latter half of the 20th century, but later moderated its views under the leadership of Bahçeli, who took over after Türkeş's death in 1997.

The MHP received as much as 18 percent of the vote in the 1999 parliamentary election but slipped below the 10 percent electoral threshold with 9.5 percent in 2002. It has exceeded 10 percent in the elections since and took 11.9 percent in the November 2015 elections.

Last year, a joint effort by the AK Party and MHP evolved into an alliance to amend the Constitution, and the two parties campaigned for the April 16 constitutional amendment package that switched the country's governmental system into an executive presidential system, which will take effect for the upcoming November 2019 presidential election. Meanwhile, the Great Union Party (BBP), which is on the far-right nationalist side of the Turkish political spectrum, also announced support for an AK Party-MHP alliance on Wednesday.