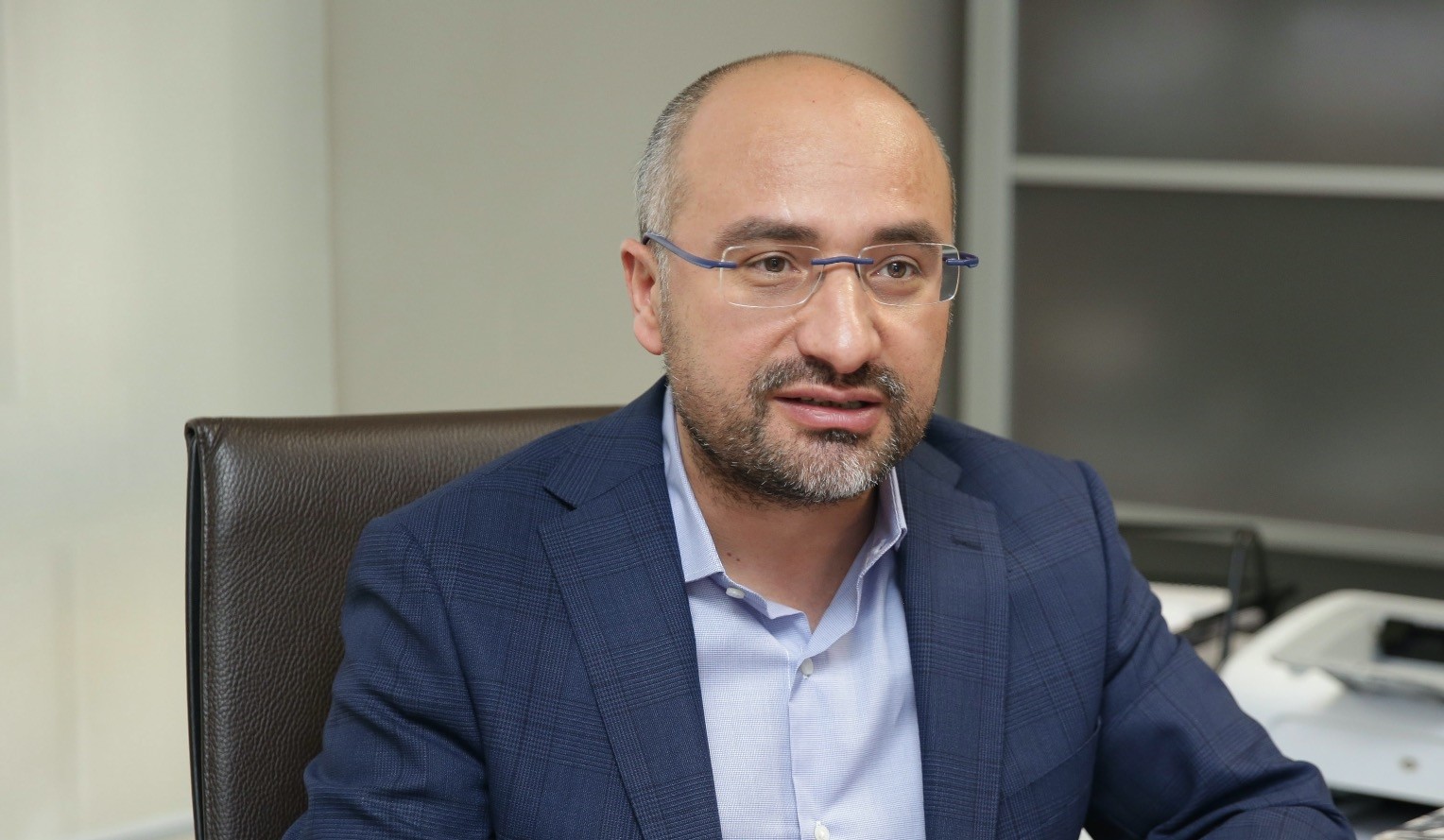 Nebi Miu015f said he believes that if the MHP-AK Party alliance is explained clearly and well enough, the Kurdish vote would not decline as argued by many.
by Ali Ünal Jan 15, 2018 12:00 am

SETA Foundation's political analyst, Nebi Miş, said the AK Party and MHP's possible election alliance is a necessary tactical move with the new presidential system, while the main opposition CHP has failed to create a long-term policy to challenge the other bloc 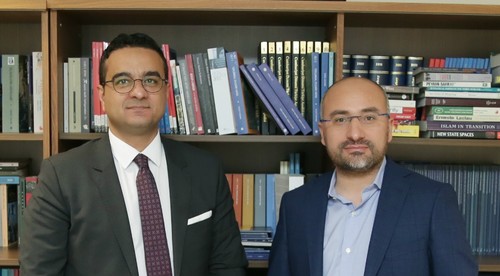 Commenting on the anti-AK Party-MHP bloc led by the CHP, Dr. Miş said these political parties failed to create long-term projects and policies that might contribute to the future of the public and the country. Hence, he believes the CHP and other political parties that side with it have no chance in the 2019 elections.

Responding to discussions that claim an electoral alliance almost two years prior to presidential elections is an indicator of snap elections, Dr. Miş said the elections have to be held on time considering the time needed to ratify adjustment laws in Parliament to allow the public to accept these changes.

Many argued that this alliance would have a negative effect on the Kurdish vote. Commenting on this issue, Miş said the referendum results showed that "yes" votes surpassed expectations in many cities in eastern and southeastern Anatolia. Thus, he believes if the MHP-AK Party alliance is explained clearly and well enough, the Kurdish vote will not see a decline.

Daily Sabah: How do you evaluate statements about forming an electoral alliance between the AK Party and the MHP?

Nebi Miş: Bahçeli does not want the MHP to not surpass the 10 percent electoral threshold with the establishment of the Good Party. Even though he claims his party won't have any issues surpassing this threshold, there is always the possibility. Since 2002, the MHP's votes fluctuated between 8.3 percent and 16.3 percent. During the Nov. 1, 2015 elections, the MHP was able to secure 11.9 percent of the votes. In this respect, voter shifts towards the Good Party will determine whether the MHP is represented in Parliament.

For this reason, Bahçeli stated that the 10 percent electoral threshold is "cumbersome" in early November and started a discussion about it. Even though Bahçeli started it himself, the actual addressee of this discussion was the AK Party. As it was being thoroughly discussed by the public, President Erdoğan stated that "an electoral alliance is something to think about," while underscoring the importance of political, economic and financial stability in the country. Thus, Erdoğan's statement revealed that the AK Party preferred an electoral alliance rather than lowering the electoral threshold.

When it was seen that statements made by various political actors of both parties may upset the delicate balance between the AK Party and the MHP, President Erdoğan recently expressed that no one should talk about these issues beside the political party leaders. Thus, Erdoğan was aiming to preserve relations between the two parties.

Observing the AK Party's unwillingness to lower the electoral threshold, Bahçeli made his party's approach towards an electoral alliance clear, 22 months before the elections.

D.S.:What dynamics determine the ongoing cooperation between the MHP and the AK Party?

N.M.: With the referendum held on April 16, the constitutional amendment foreseeing transition to the presidential system was ratified. The first election of this new system takes place in November 2019. As part of this new system, presidential and parliamentary elections will be held on the same day. Presidential election will be held in two rounds, and a simple majority is needed to be elected president. Thus, unlike the previous systems, political parties will need to cooperate to secure the elections.

Several factors should be underscored, while explaining the necessity of this alliance for the AK Party. First, since the July 15 FETÖ coup attempt, the MHP has shown an approach about internal and external threats towards Turkey and the country's future that overlapped the AK Party's approach. Because of their similar approaches, both parties believe that cooperating in national matters will allow Turkey to thwart these threats comparatively easily. In this respect, the MHP's support consolidates the AK Party's governmental implementations and practices.

MHP leader Bahçeli shifted its approach towards the AK Party after the coup attempt. With a retroactive political analysis, he understood what the "tape setups" targeting his party since 2007 tried to achieve. He is also aware of what the intraparty opposition that emerged prior to the July 15 coup attempt led by Meral Akşener is trying to achieve. Moreover, Bahçeli is also aware that the foundation of the Good Party and its artificial luster is targeting him.

The most concrete example of the "Yenikapı Spirit" established between the AK Party and the MHP after the July 15 coup attempt was the constitutional amendment foreseeing transition to the presidential system, which was ratified with the April 16 referendum. With this cooperation, the MHP had an impact on politics that surpassed the party's voter base. Bahçeli is aware of the impact his party will have on the oncoming amendments to the political system. He also sees the AK Party heeding the advice of the MHP. Thus, he believes more concrete cooperation between the AK Party and the MHP will be beneficial.

D.S.: How will political alliances shape Turkish politics in the near future? Are we transitioning toward a two-party system?

As I indicated before, the presidential system will force political parties to form alliances. Turkish politics will become contested by two "blocs" from now on. Thus, two large parties will shape politics. Today, the AK Party and the Republican People's Party (CHP) are the representatives of these two blocs.

However, smaller parties like the MHP and the Peoples' Democratic Party (HDP) will continue to exist. These parties will negotiate with both blocs according to their ideological stance and conjunctural conditions. It's definite that these smaller parties will have an impact on politics just like the MHP did. Nevertheless, the political party system will no longer be fragmented, as was the case in the parliamentary system.

D.S.: What kind of a bloc will contest the AK Party-MHP alliance? What will be their chance to win against this alliance?

CHP leader Kılıçdaroğlu's early search for a bloc after the April 16 referendum drove anti-AK Party politics to a dead-end. Kılıçdaroğlu visited the leaders of movements that voted "no" in the referendum. He preferred to see the 48 percent opposing the presidential system as a bloc. However, the bloc consisted of distinct and various approaches; the HDP's secular and ethnic voter base along with supporters of parties like the Grand Unity Party (BBP) and the Felicity Party, who are against the presidential system but not Erdoğan's policies per se, were among this bloc. Thus, Kılıçdaroğlu emphasizing anti-Erdoğan notions to unite this bloc was the wrong strategy.

As an opposition strategy, the CHP adopted each and every political discourse that was against the AK Party and Erdoğan. They didn't consider who said it and for whom it was beneficial. For instance, the CHP didn't problematize the HDP's affiliations with the PYD and the PKK. Thus, the so-called "no" bloc started to crumble even before it was a thing. The BBP started to support the MHP and the AK Party. Even though the Felicity Party's administrators were against the presidential system, its voter base would never vote for the joint candidate determined by the CHP.

On the other hand, Kılıçdaroğlu's early attempt to create a bloc has accelerated the process of the MHP taking a side. The Good Party he awaited with great anticipation actually limited the maneuverability of Kılıçdaroğlu. Meral Akşener already announced her candidacy. Moreover, she has developed a discourse that appeals to the CHP voter base. Meanwhile, as the HDP is struggling with internal conflicts, the party is in a situation where it cannot even help itself.

As a result, the opposition is unable to make the break they are expecting. They are unable to create policies that are real and address issues people are facing. Whatever they do is only reactionary. They continue trying to save the day with hollow, shallow and inconsistent discourses.

They fail to create long-term projects and policies that might contribute to the future of the public and the country. They are taking the easy way out; they only focus on how to decrease support to the AK Party and Erdoğan.

In this respect, it is not even possible to talk about a bloc that is opposing the AK Party-MHP alliance. Thus, I don't believe the CHP and other political parties that side with it have any chance in the 2019 elections.

D.S.:What kind of effects would forming an alliance with the MHP, a party that has a nationalist and Turkish voter base, have in terms of eastern and southeastern Anatolia? How can the AK Party address possible issues?

The presidential system was proposed by the MHP-AK Party alliance. Many argued that this alliance would have a negative effect on Kurdish vote. However, the referendum results showed that the "yes" vote surpassed expectations in many cities located in eastern and southeastern Anatolia. For instance, the "yes" vote in cities like Hakkari, Muş and Diyarbakır was well over what the AK Party secured in the Nov. 1 elections. Even though not definite, this situation gives us a clue.

Considering Erdoğan's appeal to the Kurdish public up until now, it could be asserted that there won't be a drastic decrease in the Kurdish vote during 2019 elections. Nevertheless, this alliance should be explained and clarified. In this respect, the MHP's discourse will be more crucial than what the AK Party is stating. If the MHP employs a harsh nationalist discourse, it might affect the AK Party's vote negatively.

Bahçeli deems political parties other than the HDP securing votes in eastern and southeastern Anatolia important for Turkey's unity. In this sense, he will be cautious about his discourse.

Thus, if the MHP-AK Party alliance is explained clearly and well enough, the Kurdish vote won't decrease. There is enough time to explain the details of this cooperation and alliance. However, regional developments and crises in Syria, Iraq and Iran will shape the Kurdish vote.

D.S.:If the AK Party and MHP enter the 2019 elections as allies and win, what kind of a government and policies may be expected from them?

If Turkey goes to 2019 elections in peace, presidential elections will yield a result in the first round. Meanwhile, the parliamentary elections would also result in a way that favors the majority. In terms of municipal elections, powerful candidates that are in close contact with the public will secure votes, regardless of their parties.

Considering that the 2019 elections will mark the first application of the presidential system, it will be a founding parliament. If the majority of Parliament and the president are from the same party, this transitional era will progress without any issues. Of course, it should be underlined that this process is important for the AK Party's 2023 targets.