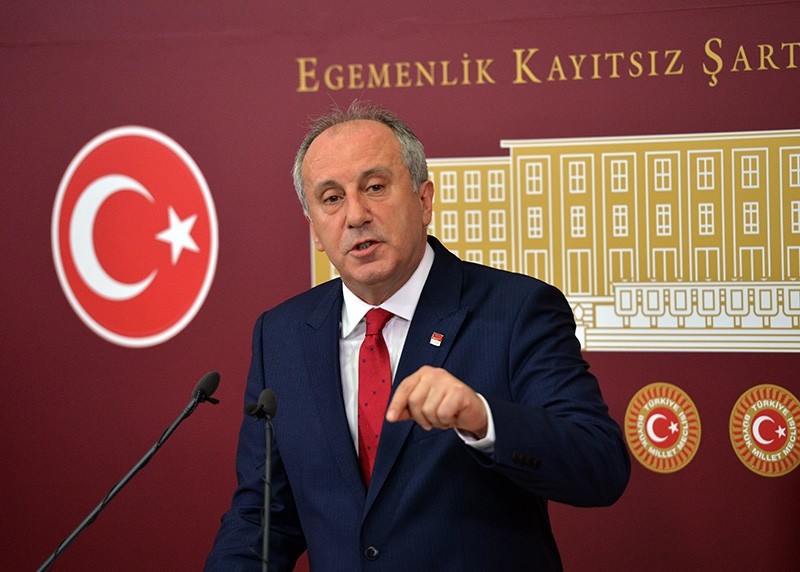 A leading lawmaker of the main opposition Republican People's Party (CHP) announced on Monday his candidacy for the party chairmanship.

Speaking at a news conference in the parliament in capital Ankara, Muharrem Ince, lawmaker from Yalova province, said: "In CHP, you cannot be a candidate, but you can be a nominee."

"I am not a presumptive nominee, because I have adequate signatures. I am saying that I have been nominated."

He was referring to the upcoming congress expected to be held on Feb. 3.

"This congress is not the congress for the running of Kemal Kılıçdaroğlu or Muharrem İnce or other nominees, but the congress of regenerating our future," he said.

İnce, a former deputy group chairman of the party, ran for the chairmanship against Kemal Kılıçdaroğlu in the 2014 congress of the party.

In the 2014 congress, 740 delegates had voted for Kılıçdaroğlu while Muharrem İnce received the backing of 415 delegates.

Previously on Wednesday, Ümit Kocasakal, former chairman of Istanbul Bar Association, declared his intention to run for chairmanship. However, since both Kocasakal and İnce both appeal to similar cadres within the party, it is not clear whether Kocasakal would be able gather signatures from some 120 party delegates needed to formally run in the congress.

Kılıçdaroğlu has been leading the party since the 33rd Ordinary Congress of the party held on May 22, 2010.

İnce said the result of the congress will not only be a concern to Turkey, "but also its neighbors, and the European Union.

"The CHP has the richness of thinking and heritage of action for solving huge issues."

"Turkey must fight against every terror attack from inside and outside," he said, adding Operation Olive Branch has the same aim as Operation Euphrates Shield.

Operation Euphrates Shield began in August 2016 and ended in late March 2017 to improve security, support coalition forces and eliminate the terror threat along the Turkish border.

"Our army is in a legitimate fight for providing us with security.

"If the mortar attacks were carried out from Syrian territories to Turkish territories, and if the terrorists have infiltrated to our territories, Turkey has right to self-defense, and this right complies with international law."

Operation Olive Branch was being carried out under the framework of Turkey's rights based on international law, UN Security Council's decisions, self-defense rights under the UN charter and respect to Syria's territorial integrity, the Turkish General Staff has said.

The military also said only terrorist targets were being destroyed and "utmost importance" was being given to not harm any civilian.

The PYD/PKK is the Syrian offshoot of the PKK terrorist group, which has been designated a terrorist organization by Turkey, the U.S. and the EU.