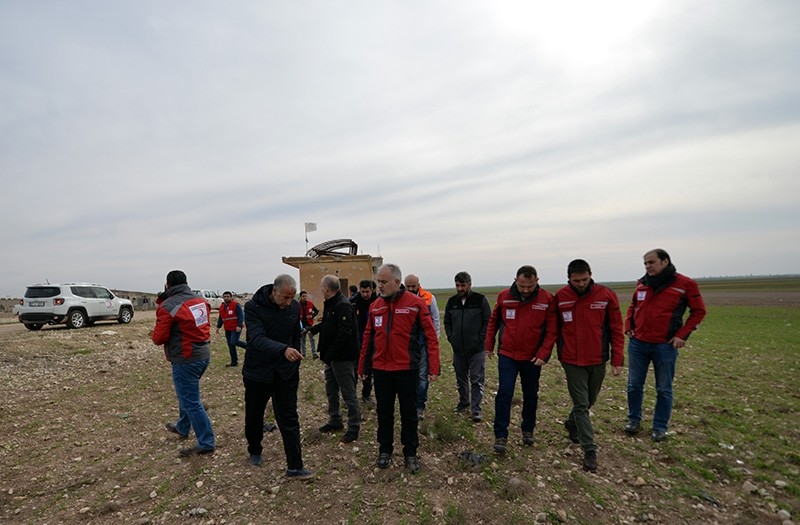 Head of the Turkish Red Crescent Kerem Ku0131nu0131k (center front) checks the site where Turkey will establish a camp for civilians in Syria's Azaz (AA Photo)
by Daily Sabah with AA Jan 23, 2018 12:00 am

Turkey will build 500 tents to host over 3,000 civilians in Syria's Azaz, where the Turkish Armed Forces (TSK) opened a new front of the Operation Olive Branch, east of Afrin, Foreign Minister Mevlüt Çavuşoğlu said Tuesday, reaffirming Turkey's continuous support to those in need.

His statement came ahead of a visit to France.

The foreign minister noted that Turkey established two camps with 700 tents to shelter civilians fleeing violence in Idlib prior to Operation Olive Branch, which was launched on Jan. 20.

"We tirelessly continue our humanitarian aid to the people of Syria as my country hosts 3.5 million Syrian guests. We provide shelter to 235,000 people in 21 refugee camps."

The operation is being carried out under the framework of Turkey's rights based on international law, U.N. Security Council's decisions, self-defense rights under the U.N. charter and respect to Syria's territorial integrity, it said.

The military also said the "utmost attention" was being paid to not harm any civilians.