Erdoğan, Putin agree to hold next summit on Syria in Istanbul 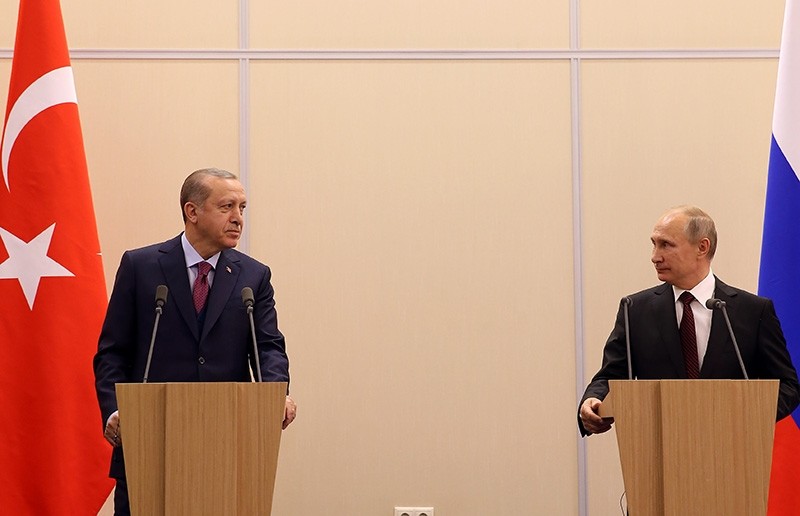 In a phone conversation, the two leaders discussed a number of issues, including the Syrian crisis and the situation in the Idlib and Afrin regions. They also agreed on establishing and speeding up the process for new observation posts near the de-escalation zones and exchanged views on the Astana process.

Turkey and the Free Syrian Army (FSA) launched Operation Olive Branch on Jan. 20 with the stated aim of clearing the PKK-affiliated Democratic Union Party (PYD) and its armed People's Protection Units (YPG), as well as Daesh terrorists from Syria's northwestern city of Afrin.

Touching on the humanitarian situation in Eastern Ghouta, Erdoğan and Putin reaffirmed determination to cooperate and act together regarding the issue, presidential sources added. Presidential spokesperson İbrahim Kalın said Wednesday that the Bashar Assad regime continues to violate the de-escalation zones deal in Syria that was agreed upon during the Astana peace process, especially in the embattled northwestern province of Idlib.

The Assad regime and Russian airplanes intensified airstrikes particularly on rebel-held Eastern Ghouta in the east of Damascus and northwestern Idlib province, killing dozens of civilians in recent days.

"The two leaders noted the importance of continuing cooperation on Syria between Russia, Turkey and Iran. They discussed future contacts in this format at various levels," the Kremlin press service said.

Kremlin spokesman Dmitry Peskov later said a summit had been discussed but no date had been decided on.

Later on Thursday, Erdoğan also discussed the latest situation in Syria with his Iranian counterpart Hasan Rouhani in a phone call, in addition to increased cooperation on security issues and on the fight against terrorism, according to presidential sources.

The two leaders also hailed progress made at the Sochi talks.

The summit, backed by Turkey, Russia and Iran, was held in the Russian Black Sea city of Sochi on Jan. 29-30, in an attempt to bring all warring parties in the Syrian conflict, excluding terrorist groups, to the table to facilitate the U.N.-sponsored peace talks in Geneva.