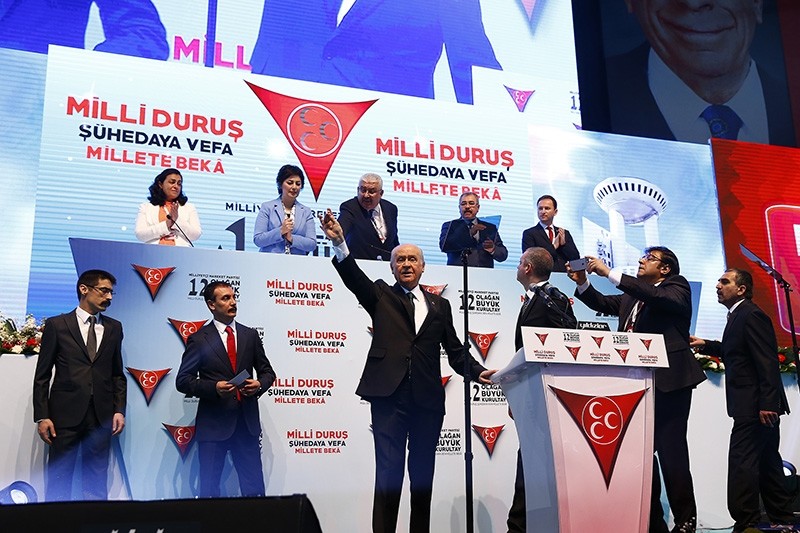 Nationalist Movement Party (MHP) Chairman Devlet Bahçeli was re-elected on Sunday at the party's 12thOrdinary Congress as he vowed to continue and strengthen the People's Alliance, established with the Justice and Development Party (AK Party), heading towards the 2019 elections.

Held in Ankara on Sunday, the MHP ordinary congress witnessed the re-election of Bahçeli, who was also the sole candidate. All 1176 delegates present at the convention presented signature for the MHP chairman. It marked the ninth congress with Bahçeli as MHP head.

Speaking at the event, MHP Chairman Bahçeli drew attention to the People's Alliance forged AK Party, saying that it will take Turkey to a brighter future. "No circle, no flocks, no political lows will be able to crack the People's Alliance," he said, adding that the allegations that the MHP will remain below the election threshold and fail in the elections are false.

The MHP chairman also pointed to terrorist groups such as the PKK, the People's Protection Units (YPG), Daesh, the Gülenist Terror Group (FETÖ) and political parties such as the Republican People's Party (CHP) and the pro-PKK Peoples' Democratic Party (HDP), saying that they will also fail in sowing unrest in the People's Alliance.

President and AK Party Chairman Recep Tayyip Erdoğan sent a message on the occasion of the congress. Wishing success to the MHP and the whole country as a result of the convention, Erdoğan underlined that the nationalist party has sided with the state and democracy in tough times such as the July 15 coup attempt and the fight against terrorism.

The president said that the process between the AK Party and the MHP, which started with the Yenikapı rally, will be brought to a whole new level thanks to the People's Alliance in 2019 and beyond.

AK Party Deputy Chairman Hayati Yazıcı, Deputy Group Chairman Naci Bostancı and Parliament's Constitution Committee head Mustafa Şentop represented the party at the congress. This has been the highest-level AK Party delegation ever to join the MHP congress since the AK Party was founded in 2001.

Following his re-election, Bahçeli is expected to focus on rejuvenating the party's central executive board and select his A-team from the younger members of the board while heading to the crucial 2019 general and presidential elections. It has been reported that the MHP chairman has lately been not pleased with the performances of some central executive board members.

The MHP has started an alliance with the AK Party for the 2019 elections after MHP Chairman Bahçeli announced previously that his party would not nominate anybody for the presidential elections but support President Recep Tayyip Erdoğan for re-election. Since then, the two parties have drafted a 26-article alliance bill and passed it together in Parliament. Moreover, the AK Party and the MHP will continue to make adjustments for the new executive presidential system after the 2019 elections, deputies from both parties said last week.