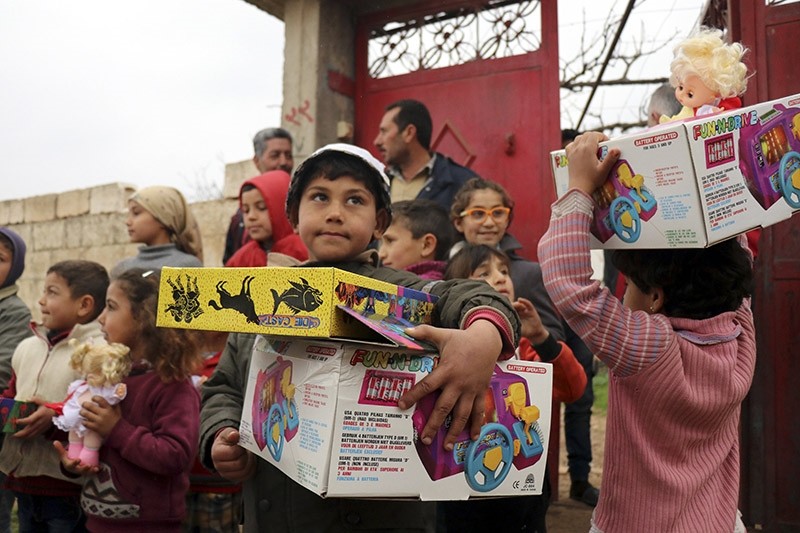 As the recovery process continues following the liberation of the Syrian town Afrin from the PKK and its Syrian affiliate, the People's Protection Units (YPG) terrorists, Turkey is now working to renovate schools in the province.

The renovation project is being led by the Keçiören district municipality of Turkey's capital Ankara. The municipality spearheaded a similar project in Jarabulus, Syria in the wake of Turkey's Operation Euphrates Shield in 2016 and early 2017.

Renovations in the schools include refurbishing classroom walls, floors and playgrounds as well as replacing chairs and desks. He said the restoration of each school can take days. "We're carrying out intense field work with a team of 50 people," Başer said. "We're planning to restore every school in all other settlements liberated from the terrorists," he added.

Başer further expressed that some of the schools they renovated were damaged by bombs and left in the disrepair. "The schools were lacking most of their equipment. In this respect, we do whatever's necessary. We plan on rebuilding playgrounds in schoolyards so children can play and spend quality time outside," Başer stated.

Education is currently being provided in some of the renovated schools. Şaban Haskur, manager of a renovated school in the Ma'arrin village of Afrin with a capacity of 400 students, said there are 19 teachers currently working at the school.

"We are thankful for our Turkish brothers. They completely renovated the school and made sure it had everything it needed. Everything is great. There is a playground where children can play, which is why they love the school even more. We, as their teachers, work hard for them," Haskur said, adding that they are grateful the terrorist threat is in the past.

One student attending the school, Şehed Mustafa, said their school was in bad shape before but has now has had a complete makeover.

President Recep Tayyip Erdoğan said recently that Turkey will immediately take the necessary steps to make sure that the residents of the city are able to return to their homes as soon as possible. Also, Prime Minister Binali Yıldırım pointed to the developments in areas liberated and revitalized by Ankara. "We have said from the beginning that we have no intention of staying. We heard these claims during Operation Euphrates Shield, as well. Over 135,000 Syrian families have settled and 160,000 students are going to school along the Jarablus-Azaz line," he said.

Operations Euphrates Shield started in August 2016 and officially ended last year after Turkish-backed Free Syrian Army (FSA) fighters drove Daesh out from towns near the Turkish border. Apart from military support, Turkey extended its hand with humanitarian aid to locals returning to their homes after being driven out by the terrorist group.

Since Operation Euphrates Shield's success, schools have been prioritized in the rebuilding process in towns liberated from Daesh, and the Maarif Foundation of Turkey has already opened several in Jarablus and al-Bab. The schools, including one in Jarablus that was converted into a prison by Daesh when the terrorist group took over the town, have been renovated. Now, a similar process is being planned for the aftermath of Operation Olive Branch, which was launched on Jan. 20 and achieved its initial aim of liberating Afrin's city center from YPG terrorists on Sunday.